Water on the trail - treatment 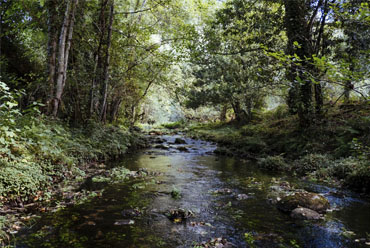 It was getting dark, so I started building the shelter. The lack of water was not a problem, or so I thought then. It is true that I hadn't had a drink for several hours and the last sip was left in the bottle, but according to the map the mountain spring was only 300 meters from my camp. What could have gone wrong? Late in the evening I went with my flashlight to get some water, straight from the spring. I was looking for it among forest pits, boulders and fallen trees. In complete darkness, with only a narrow beam of light to help me, after 30 minutes I gave up. All I found was a dirty puddle with boars lying in it. During the night, the growing thirst kept me awake. The drought in the mouth was unbearable. I promised myself that I would never make that mistake again...

In a survival situation, it is very important to drink and store water at every opportunity.

Man is able to survive without water for 3 days, while the troublesome symptoms of dehydration appear after a few hours, with a 1% decrease in water content in the body. These can include headaches, muscle spasms, feeling tired and a lack of strength to act. The symptoms worsen over time, leading to a painful death.

It is difficult to precisely determine the amount of water that should be drunk per day. It depends on many factors, such as the intensity of physical exertion, general condition, weather conditions, etc. Often we hear about 2 liters, but this amount, in survival conditions, may turn out to be insufficient. In the desert, the demand can rise to 4-5 liters.

Good sources of water are:

Next, we pay attention to sources devoid of electrolytes and minerals, such as:

It is said that you should not drink water directly from ponds and lakes, because they develop various microorganisms and parasites. There are, however, exceptions to this rule. A crystal clear Norwegian lake can contain water that is healthier than that provided by the waterworks.

Theoretically, water from mountain streams is fit for consumption without prior treatment, but in practice it often flows through areas contaminated with faeces and animal remains. We can never be sure what lies upstream.

Water that does not come directly from the source or is not freshly collected rainwater must be treated before drinking it, i.e. getting rid of harmful microorganisms and impurities. Various filters and treatment tablets are used for this.

Filter in the form of a pump - my favorite solution. Put the first hose into the water source, the second into the bottle, pump it up and it's ready. Water so filtered does not need to be boiled.

If we do not have the appropriate equipment with us, we are forced to improvise and make the filter from scratch. We will need a sock, a cut-off trouser leg, a plastic bag or a plastic bottle. We fill it (from the bottom) with charcoal, clean sand and grass. Water passed through such a filter still has to be boiled in order to remove bacteria and parasites from it.

At sea level, boil the water for one minute. For every 300 m in altitude another 60 seconds should be added. A plastic bottle can be used as a vessel, as the liquid it contains will prevent the plastic from melting.

Water treated with a sand and charcoal filter may seem dirtier than before, but it is definitely healthier for us. For flavor, I recommend adding a few blackberry or raspberry leaves.

We obtained, treated and stored water in bottles. Now it remains to remember one thing: Drinking "on the off-chance" does not make sense. In this way, we waste a valuable fluid that is not absorbed and is excreted from the body with urine. Within an hour, we should drink a maximum of half a liter.