"The zone draws you in ...", that is about Chernobyl and not only - an interview with Project Explore 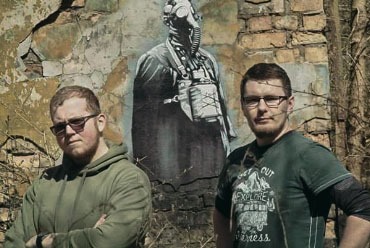 You can do a lot for your passion. Especially if it is sometimes associated with dangerous situations. Or unusual. In the case of our two interlocutors, it is definitely so. Most of their free time in their lives is devoted to urban exploration, i.e. Urbex. Tomasz and Jan - the creators of the Project Explore channel on YouTube, decided to share with us their thoughts on their hobby. We invite you to read the interview!

Maybe a very prosaic question at the beginning. Where did your passion for Urbex come from?

Tomasz: In my case it all started with the computer game "Stalker: Shadow of Chernobyl". As you can see from the title itself, in the game we visit the Chernobyl Exclusion Zone. This made the trip to Chernobyl my dream, although it was impossible at that moment. In order to at least feel a substitute for Chernobyl on the spot, I started exploring the surrounding abandoned places.

Jan: In my case it was an absolute classic of the genre. It started with the words: "Hold me a beer." While still a student, together with our friends from the dormitory, we decided to go to the Poznań Warta River to celebrate the spring that was just beginning. While already on the shore, one of us noticed that there was a mouth of the city's storm sewer to the river nearby. A spontaneous decision was made to enter the dark, damp tunnel and see where it would lead us. It turned out that a powerful system extends under almost the entire metropolis, creating a kind of city 2.0. After this adventure, I created my profile, the Dark Side of Poznań, and started sharing photos from my urban explorations on it. 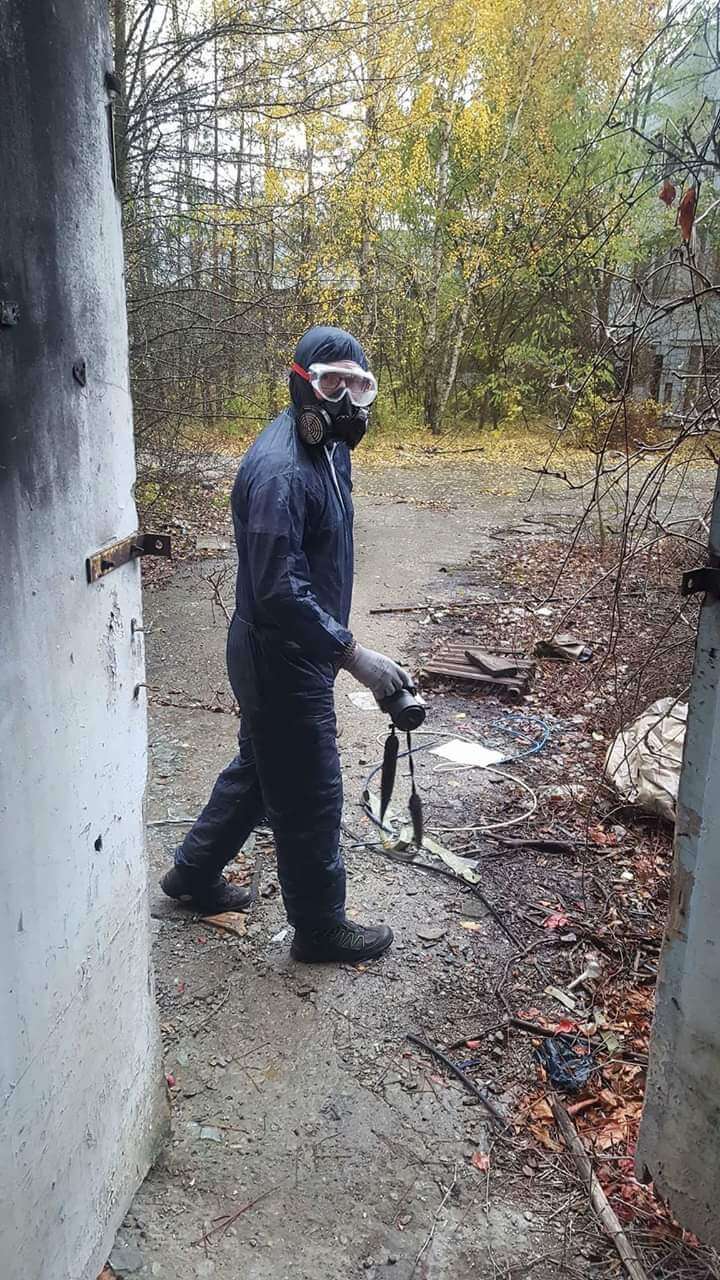 Each of you has your daily life: work, family and other essential duties. When do you find time for your passion?

Tomasz: In my case, the matter is quite simple, during the week I work and in my free time, I edit films, and on weekends I go to Urbexes :).

Jan: I don't sleep much. I sleep VERY LITTLE. But seriously, for many years I worked as a manager in a large corporation, so I have perfect time planning and I can find a lot of free time for my additional activities.

You can be known to a larger number of people primarily for your filming activities on the YouTube platform. You founded the channel in 2015, so you've been around for quite a long time. Why did you decide to show your hobbies to more people?

Tomasz: As you mentioned, the channel was founded by me in 2015 under the name Urbex Bydgoszcz. As for the release of the films - it was a very spontaneous move inspired by other Urbex creators, of whom there were very few at the time.

Jan: As Tomasz was already running a YouTube channel when we met, I was faced with a fait accompli. We had a camera with us since our first urbex together, so I found it natural.

Abandoned houses, factories or other public places. What turns you on the most?

Tomasz: My favorite places are old, post-PRL and post-Soviet factories. I am intrigued by their industrial and very austere climate, old-style machines and socialist realism typical of that period visible in many places (e.g. on propaganda posters).

Jan: I think the answer to this question can be seen very clearly in the movies from our last trip to Chernobyl. You can see that Tomasz focuses more on technical aspects. I, however, look for human stories in abandoned places. I often feel like a crime scene detective. I want to find out what is hidden in the buildings shrouded in dark aura and mystery. Where are the people who used to live in them and what happened to them? 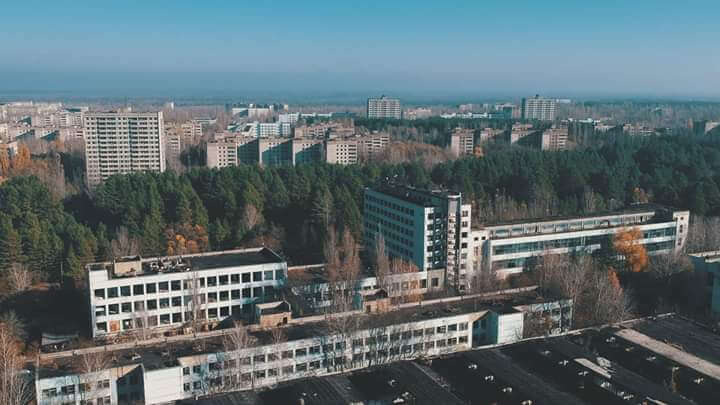 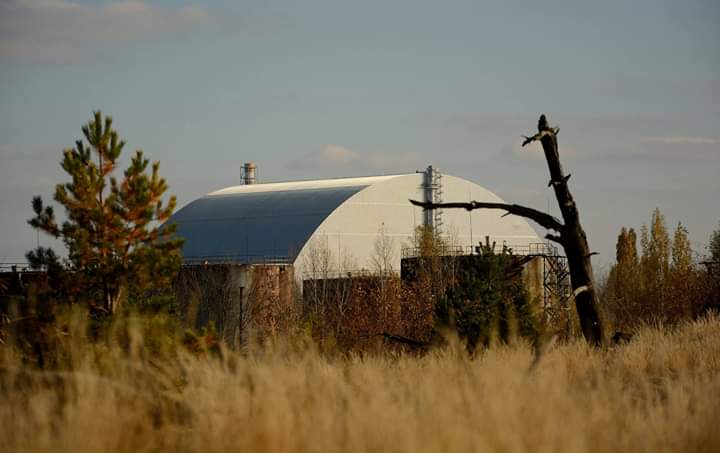 Sarcophagus from a distance.

Recently, the topic of Chernobyl has become very timely. Partly because of the show that premiered last year, and partly because people have always been drawn to less obvious places. What were your feelings after visiting the Chernobyl Zone?

Tomasz: The vastness of the area itself and the number of abandoned places in the Zone are certainly striking. During one of the trips, we had the opportunity to travel almost the entire Zone along - completely deserted villages and the omnipresent emptiness around it gives the impression that we are watching some post-apocalyptic film.

Jan: I can talk for hours about the impressions I experience in the Zone. It is an incredibly broad topic that is covered by countless reporters, photographers and columnists around the world. Everyone can find something for themselves there. How many pairs of eyes had the opportunity to see Chernobyl live, so many stories of this place we can hear in the stories of people who were there. The first time I went to the Zone, I was told that you can't come here only once. The zone is captivating. I experienced it the hard way. I have been there 4 times already and even though I do not plan it, I expect that I will return there again. It is a unique place in the world. We are not able to experience such stories and views anywhere else.

From the films on the Project Explore channel, I know that the Belarusian Exclusion Zone made a great impression on you. This place is definitely less popular than Chernobyl. What led you in that direction?

Tomasz: The Belarusian Zone has been open to visitors only for a year, and the practically negligible number of tourists compared to the Ukrainian Zone intensifies the atmosphere I mentioned in the previous question. Additionally, buildings are often better preserved and exploration looks much freer - no one controls us and we can go wherever we want. You can even fly a drone :).

You've seen a microscale ersatz apocalypse. In your opinion, can this be the world after the apocalypse?

Tomasz: If humanity suddenly disappeared unexpectedly, it would probably be like that.

Jan: To tell you the truth, I am counting on a zombie apocalypse, and unfortunately I haven't met such in the Zone.

You have visited many interesting and intriguing places. Which of them do you feel most fond of?

Tomasz: In my case it is famous among the explorers of "ZNTK". Giant plants, from which we made many films, and it was after the first visit to these plants that we decided to continue to create the channel, only from that moment on in two and under the name Project Explore.

Jan: Difficult question. There are many places I would like to come back to again. Submitting them to another exploration, capturing new frames with my camera, looking at a given place again in the hope that I will discover a new mystery there, which I did not notice during my first visit. Unfortunately, the growing popularity of the hobby of urban exploration increasingly attracts the wrong people to abandoned places. Thieves, vandals and pseudo-explorers can destroy a given place within a week, within two weeks of revealing its location on the web. As a result, when going for the second time to a well-preserved building, we most often come across a shambles and ruins. It is extremely upsetting and discouraging. Such people quickly spoil the opinion of explorers in society, and as a result, we meet with increasing hostility from people we meet on our way during exploration.

A lot is behind you, and even more ahead. What are your next trip plans?

Jan: The plans are of course ambitious. We try to reach further and further and set off to more and more distant corners of the country and continent. The plans include Poland, the Czech Republic, Slovakia, Austria, Germany, Belgium, England, Belarus and Ukraine. Apart from further and further travels, we also try to improve our skills in front of the camera and film editing. We buy new equipment in order to present the places we explore to the viewers in the best possible way. At this point I would like to thank our patrons, because it is their support that gives us such opportunities. In addition, we plan to develop our channel thematically, starting a film series on travel and bushcraft in the near future. The project will appear under the name EXPLORACYJNY.PL. We hope that such a variety will be positively received and will enjoy a large audience.

Finally, we wish you good luck in implementing these plans. We keep our fingers crossed for you!

The interview was conducted by: Jakub Dobrzyński