The history of the evolution of modern camouflage, or masking in a nutshell 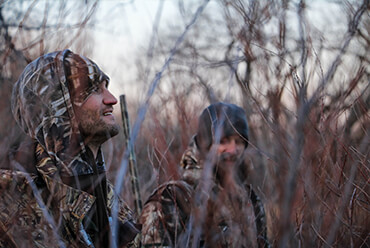 I am writing my first article in Liège, Belgium, which played one of the key roles during World War I, putting up stiff resistance to the three times larger German army advancing through Belgium towards France. The city, defended by a system of twelve forts, detained the aggressor's troops until the largest cannons of this conflict were brought in - the 420-mm M-Gerät mortars, which fire resulted in the surrender of 30,000 defenders. The 12 days of the siege resulted in a delay in the implementation of the Schlieffen plan and, as a result, the defeat of the entire invasion of France. The city of Liège was awarded the French Legion of Honor.

Why am I writing about World War I instead of the Fabrique Nationale de Herstal plants? I will probably write about FN (Fabrique Nationale d'Armes de Guerre) soon, and this time my thoughts were focused on my previous visit to Belgium and the memories of the 100th anniversary of the outbreak of the conflict. A conflict that has had a huge impact on the way modern warfare is conducted, including the design of field uniforms.
European troops from the 17th century were characterized by a huge variety of frontal units, and uniform designers liked to dress their soldiers in blue, white, red and yellow. The French army has outdone itself, dressing the infantry in blue combat jackets cut in the center by a cross composed of two white stripes. They couldn't make aiming any easier! 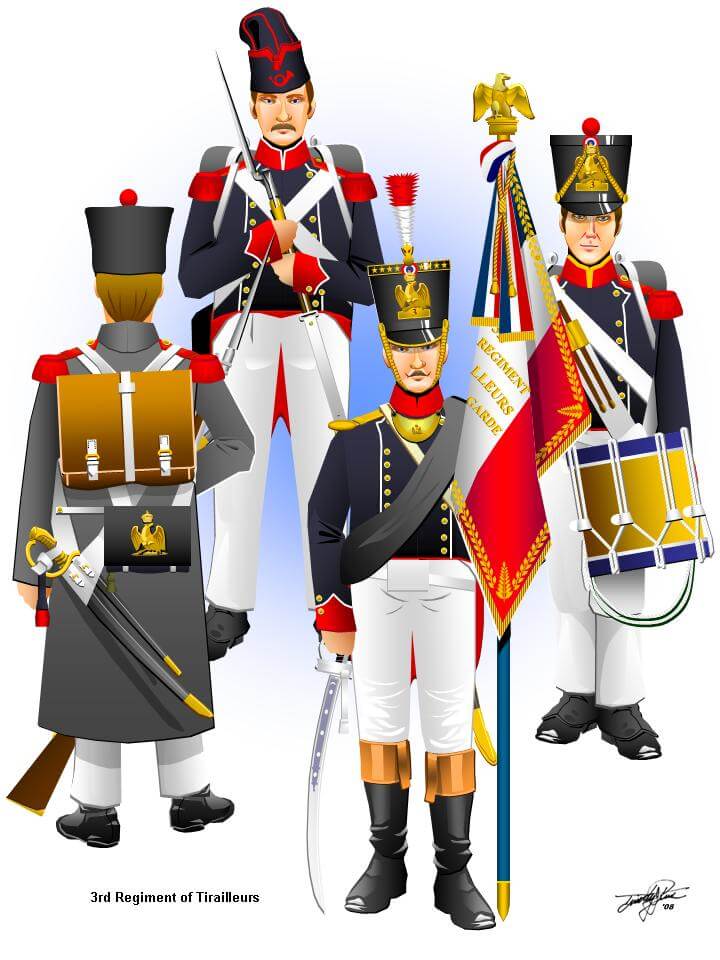 During the fights on the American continent, the indigenous inhabitants of America were very surprised to see the richly decorated, bright uniforms of the English or French, describing them, for ease, as red or blue jackets.
The red color of British troops went down in history thanks to the Crimean War. The previous one, from 1854. In the Battle of Balaklava, the Scottish unit bravely faced the much more numerous charge of the Russian troops. You surely know this term, thanks to the later published, but concerning a completely different conflict - the Battle of Guadalcanal, the book, and its adaptation - "The Thin Red Line".
It was extremely foolish to use colors so unnatural against the background of a forest or a steppe, making it easier to aim. The Indians also quickly noticed epaulettes and embroidery that distinguished officers, targeting them in the first place ...

The same was done by European soldiers, searching for the enemy officers and non-commissioned officers, and the more and more precise weapons caused huge losses in the officer corps. 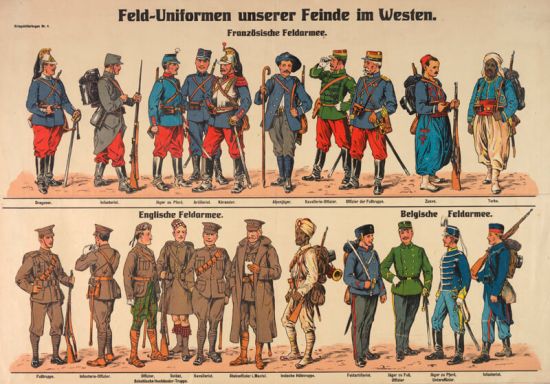 German poster from World War I: 'Uniforms of our enemies'
Photo: http://www.thehistoryof.info/?p=21

In this way, officers in the trenches of World War I, for the first time in history, began to think en masse how to cover the insignia, how to soil red pants with mud, how to blur the silhouette with long, gray coats. This was especially important in a trench attack, when the least conspicuous soldiers had the best chance of not getting a bullet.

The first masking activities were aimed at minimizing losses, but at the end of the war, this art became a permanent feature of the trenches on both sides. During World War II, soldiers fought in subdued uniforms, as well as in the first camouflage patterns, such as the German Blockmuster developed in 1936. 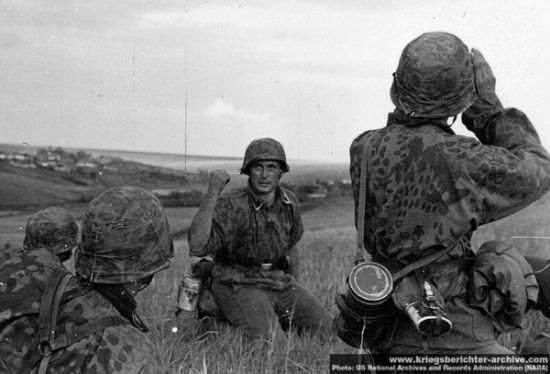 As the precision of the weapon developed, the specialization in the ranks of soldiers grew. More and more often, shooters organized ambushes on enemy troops, hiding themselves and their weapons in the selected area.

For a sniper, learning the art of masking is a condition for survival. Today, just blending into the surroundings may not be enough. The modern battlefield is saturated with an increasing number of optoelectronic reconnaissance devices. As technology evolves, the ways of neutralizing it will also evolve, but the classic principle of hiding from the eyes of the opponent still remains a fundamental principle of precision targeting.

Moving on to practice - the idea is to blur the silhouette of the soldier and his equipment so that the observer would not be able to see the hidden figure. 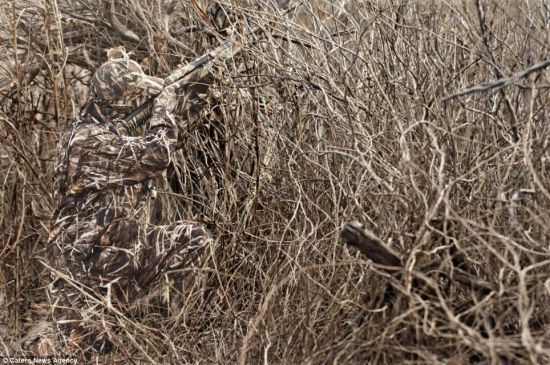 The key here will be to understand how vision works, especially the concept of spatial vision. It is based on the ability to detect potentially dangerous areas from the overall plan, i.e. elements that move or do not fit into the environment. Hiding a soldier from the observation mechanism is half the battle, so it is important to adjust your outfit and hideout to the environment so as not to stand out with color, movement, and not to disturb the natural pattern of lines and shapes of the background. The type of vegetation, growth angle, wind direction and strength, sunlight, natural landscape features, etc. should be analyzed very well.

The second important type of vision is central vision, which manifests itself in the ability to recognize the elements on which we focus our eyesight. In other words, if the observer manages to spot an anomaly in the observed area, but fails to identify known shapes - facial features, straight lines of a rifle, human silhouette, etc., then it is a complete success of the masking.
As we know perfectly well, man has a tendency to instinctively perceive previously known shapes, in particular to see facial features (this tendency has its name: pareidolia) in absolutely absurd objects, including the image of the Poor Mother of God on the wall of the apartment. Hiding facial features and the regular shape of the head in general is the first and probably one of the most important elements of masking. 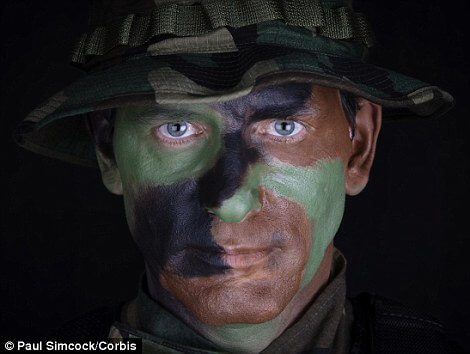 An example of the proper blurring of facial features
Photo: Paul Simcock (Orbis)

The analysis of the environment and previous tactical assumptions will suggest the selection of shades and how to apply them to the face - both the angle at which we paint the stains and their location will be important. One school suggests that you try to hide the characteristics of the face - the oval, the location of the eyes, mouth, nose, by painting spots asymmetrically. The second school teaches you to try to reverse the anatomy of the face and paint over the light areas of the face with a darker color and the dark areas with a lighter color. This has an excellent effect of depriving the face of three-dimensional features, which reduces the risk of detection also when the observer's eyes are focused on the area of the hideout.

Someone wise once said that, as a last resort, you can also paint your face similar to the pattern on your clothes. There is a lot of truth in this - even if the pattern does not quite reflect the background patterns, it is much better to be a single spot than two spots that stand out from the landscape. It is important to remember the basic rule of elegant girls - makeup sometimes wears off or melts, so similarly, or even more so - a soldier operating in the field has to "powder his nose" from time to time. Only by God, remove the mirror from your paint kits if you don't want to get hit in the back of your head with a hunting caliber bullet ...

Contrary to appearances, masking clothes is a very complicated activity. First of all, let's look at the clothes and remove any disturbing label patterns on the outside of the garment, which unfortunately happens with some producers. In the next stage, let's focus on such a deformation of the figure to blur all symmetry, because the shape of the human figure will be immediately noticed against the asymmetrical shapes of nature elements. 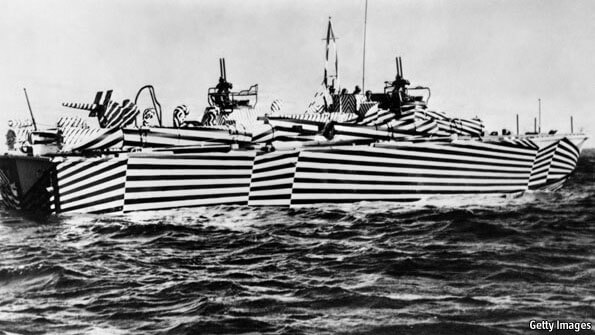 An example of blurring the silhouette - the hull and superstructure of the ship were divided into sections and blurred through the use of a clear differentiation of patterns
Photo: http://forums.intpcomplex.com/showthread.php?2702-Pareidolia-Pantheon

Using plant fragments, we try to make them look like a selected bush or a clump of grass - here the so-called Ghillie Suit comes in handy, i.e. a special outfit that blurs and covers the entire silhouette of the shooter, enabling the attachment of plants present in a given area. You can make such an outfit yourself, you can sew strings on the clothes - there are many possibilities. By the way, a curiosity: Ghillie Suit was invented in Scotland, where this art was passed down from generation to generation in hunting families, and during World War I - it was first used for military purposes. The term „ghillie” means "bush" in Old Scottish and perfectly reflects the first principle of becoming like the environment. 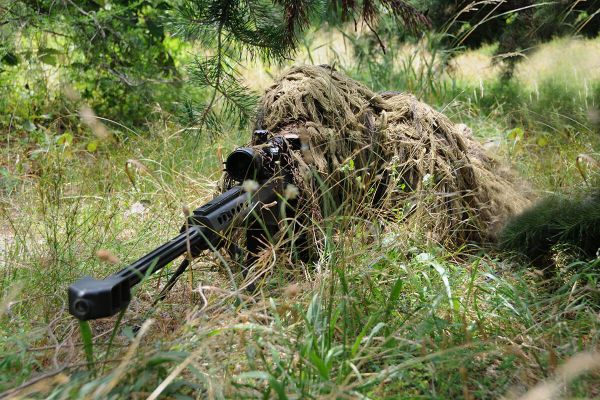 A sniper in a ghillie suit
Photo: http://www.military.com/equipment/ghillie-suit-accessory-kit

A good sniper / scout must carefully observe the terrain also in terms of changes in flora and terrain, because a fern bush that works well in a forest will not look great in the middle of a meadow. In fact, it will even become a cause of death if we encounter an enemy sniper whose eye immediately notices such an anomaly.

The change of camouflage elements must be smooth, during the march, so as not to attract the attention of a careful observer even for a moment. The preparation of the sniper position is subject to similar rules. Remember! Bringing a handful of needles from a tree a few meters away, in order to mask a fresh ditch, will be a fatal mistake, because the wind does not carry the needles that far - we mask only with what could be found in a given place. Therefore, making a roof covering or a camouflage cloak is best done by cutting a patch of turf, using it as a natural camouflage of the selected place.

The sniper's equipment must not reflect light under any circumstances. Everything, literally everything, should be disguised as carefully as the shooter. Wrapping the rifle with a rag or net is a fairly effective and simple way to break the regular shapes of the weapon. However, special attention should be paid to the optics and the area of the rifle bolt - due to the mechanics of its movement, it cannot be effectively covered with masking paint. 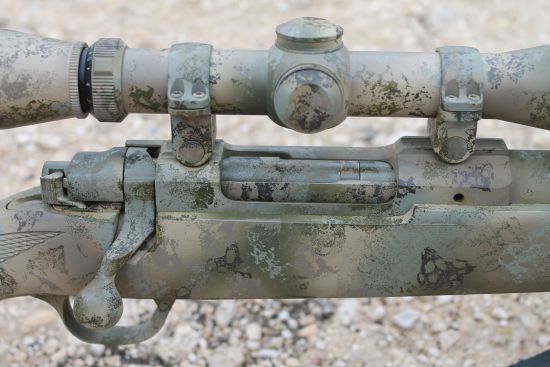 The rifle is covered with camouflage paint for the weapon
Photo: http://www.thetruthaboutguns.com/2013/11/tyler-kee/product-review-kg-coatings-camo-coating/

If we protect ourselves and the accessories from being detected by the trained eye of the observer, we should also take care of the sound and ... smell. Yes, the smell! The sharp smell of sweat or perfumed cosmetics stand out from the scent of a forest or a meadow like an unmasked man against a background of grass, and even the best hidden sniper can reveal his hiding place. In combat conditions, we use fragrance-free cosmetics, including anti-dogs and insect repellants.
Sounds - well, any metallic sound will be at least alarming, because the metallic form of elements is not natural in nature. Thus, all buckles, fittings, clamps and the like must be completely insulated from other metallic garments. 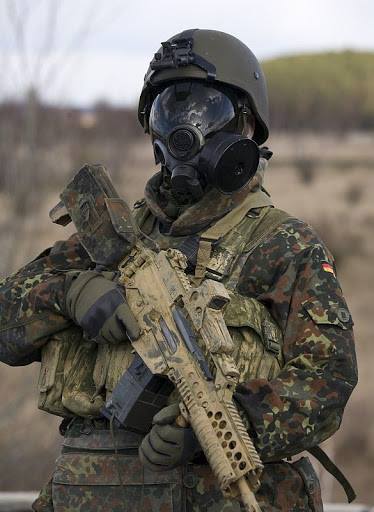 In addition to the masking itself, remember to make only such movements that harmonize with the dynamics of the environment - a running bush or a clump of moss will certainly attract the attention of every observer, and a regular shadow will reveal our position as quickly as our own shapes. Therefore, let us always try to stay close to the ground. And the cardinal rule – the masking can in no way limit our freedom of movement.

An example of masking a rifle
Photo: http://www.ghilliesuitsonline.com/ghillie-rifle-wrap.html

Finally, two words about the pattern known as "Moro". Moro is a specific pattern for working and protective material, developed in 1968 for field uniforms of the Polish uniformed services. 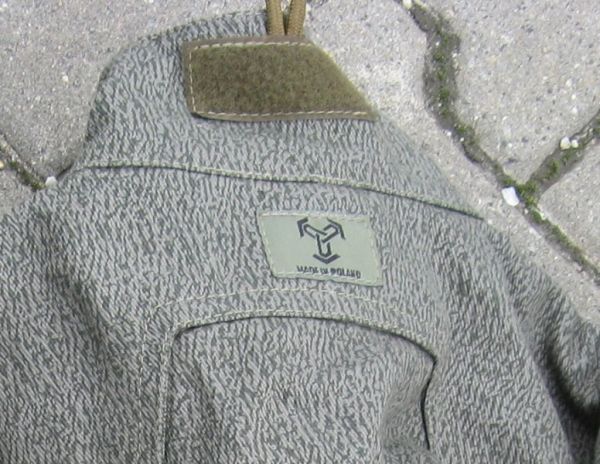 The spotted pattern, which is often mistakenly referred to as this, is the popular "panther" from 1993. 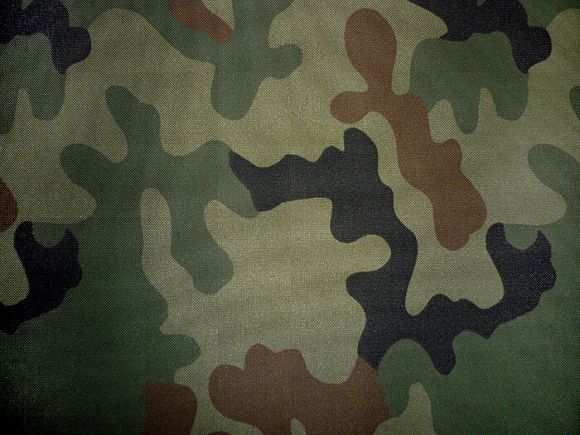