Navigation in the field 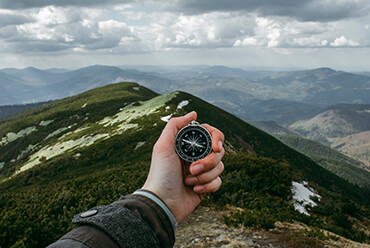 I wanted to wander off the trails… When there were two hours until dark and I was surrounded by a dense spruce forest, I regretted the decision to shorten the road. I got lost without having camping equipment with me. There was little time to find the nearest village.

The scheme of conduct in order to independently find civilized areas is similar in most cases. You should head down the terrain to find watercourses, and then follow them towards human settlements.

The task becomes easier when we have instruments that facilitate navigation, such as:

Determining the direction of the march with the help of the map and the compass should be started by orienting the map in such a way that the north direction indicated by the compass coincides with the north on the map. In this position, we can determine our own position by comparing the location of characteristic points (trails, rivers, mountain peaks, caves, etc.) in the field and on the map.

The key skill is determining the azimuth (the angle between the north and the walking direction). Thanks to this skill and prior determination of your own location, you can set the direction of the march to any point visible on the map. However, it should be clearly stated that this method is much less accurate than navigation using the GPS system.

How to set azimuth to a specific point on the map? You can see the whole process here:

We should also take into account the magnetic declination (the difference between topographic and magnetic north) by rotating the ring by the value given in the map legend, e.g. if the bearing is 50 degrees and the declination is 3 degrees to the west, set the value to 53.

However, I know from experience that taking into account the magnetic declination in Poland does not make any sense, as it is only a few degrees. Meanwhile, the margin of error when walking to azimuth is usually much higher.

The battery in the smartphone has died, and we do not have a map or a compass with us. Wild terrain around us. What to do in this situation?

Nature comes to the rescue. It should only be carefully observed:

Gnomon method: For at least an hour, mark the end of the shadow cast by a stick stuck in the ground. The starting and ending point will be determined by the east-west line. A line drawn perpendicular to this section will indicate north-south directions.

Marking the directions of the world with a watch: point the hour hand towards the sun. The bisector of the angle between it and twelve o'clock will indicate south.

Finally, I would like to warn you against the popular claim that moss grows mostly on the northern side of the trunk. This is bullshit. In fact, it all depends on many variables, but this is a topic for a separate article.