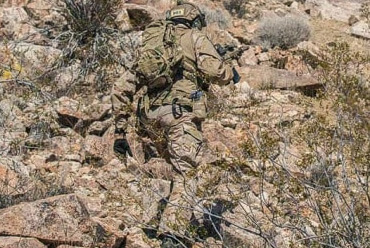 Camouflage is one of the most important elements of tactical operations carried out in the field. Properly developed military masking effectively blurs the contours of the figure, which, combined with technical preparation and the ability to conduct operations, ensures a high level of security. Therefore, troops around the world constantly cooperate with companies that deal with the development of camouflages - among the most valued and known are Crye Precision and Kryptek. The camouflage designs designed by Crye Precision are one of the most effective camouflages around the world, so I decided to take a closer look at the history of their legendary MultiCam® camouflage.

Currently, olive drab and khaki colors are the most recognizable colors among military lovers. Above all, however, they form the basis for the first camouflages - in England, green was initially used by foresters who unmasked poachers. It was only during the Napoleonic wars that this color was introduced to the uniforms of soldiers. With the expansion of the British Empire, green colors ceased to work in the Indian subcontinent. The solution to this problem appeared only in 1848, when Sir Harry Lumsden introduced a new color for the British uniform. Khaki, because we are talking about this color, perfectly matched its shade to local, foggy areas (from Persian, Khaki means the color of ash / dust). In this way, by combining colors, the first camouflages began to be created, the colors of which did not refer to the colors of the flag of a given country, but the areas in which soldiers moved.

MultiCam camouflage hides many elements, so before we get to know its whole history, we need to travel a short time, overview of American camouflage masks used by soldiers of the US. Army. The first commonly used camouflage was used in 1940 - it was developed by Norvell Gillespie - an editor in the magazine Better Homes and Gardens and a passionate who, while growing plants, combined art, science and technology (horticulturist). Camouflage designed by him - Frogskin 1. 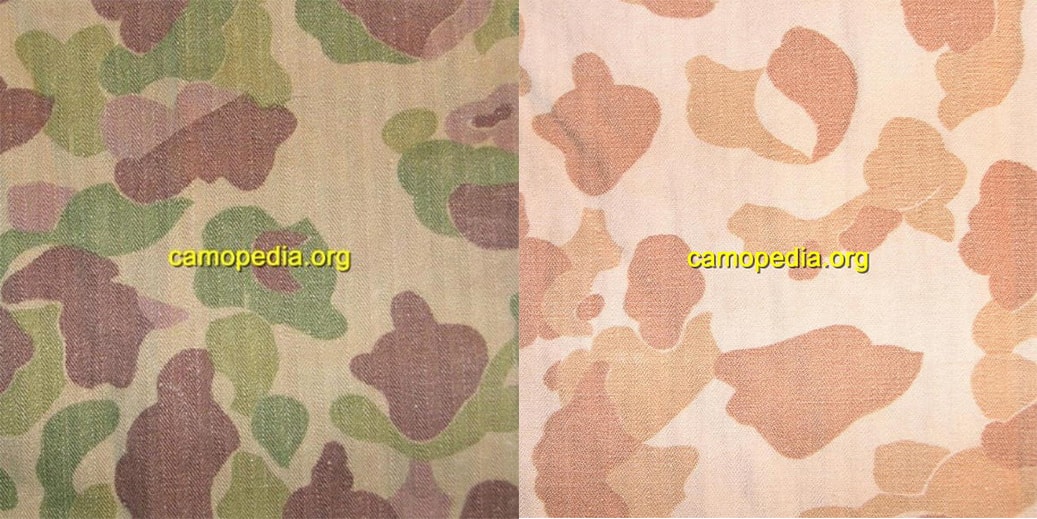 The road from Frogskin camouflage to Woodland
Fot.: camopedia.org

However, before the Woodland pattern was developed in 1962, the U.S. Army, seeing the then political situation in the Middle East and the need to intervene in the Israeli-Arab conflict, undertook to design desert masking.

The developed DBDU camouflage Desert Battle Dress Uniform (commonly referred to as Chocolate-Chip or 6-Color Desert Pattern) was created from 6 colors. The DBDU camouflage was officially presented in 1990, but its first widespread use was recorded during Operation Desert Storm "Desert Storm" and "Restore Hope". However, despite the fact that it worked in the desert of California, it did not meet the requirements of deserts in the Middle East. Therefore, the camouflage underwent numerous modifications, whose task was to increase the camouflage capabilities. It was only after the invasion by the Iranian army in Kuwait that the US Department of Defense began developing a new camouflage. The newly created 3-Color Desert Pattern masking has been colloquially referred to as "coffee stain" by US staff.

But what do Woodland and Desert Pattern have in common with MultiCam?

In 2004, the U.S. Scientific Complex Army Natick Soldier System Center in cooperation with Crye Precision developed the Scorpion camouflage (officially: Close Combat Uniform). Designed CCU masking was to replace and combine the existing 3-Color Desert and Woodland camouflage. The goal of this solution was to ensure maximum efficiency when conducting operational activities in a diverse area. Later, Crye decided to refine and improve the camouflage, creating its various color options. In this way, MultiCam® camouflage was created, i.e. a multi-environment masking solution. The properly coordinated pattern and color system meant that in 2010 MultiCam® Crye Precision was officially adopted by the United States Armed Forces for all tactical operations carried out in 2010 in Afghanistan.

It's time to learn how MultiCam® camouflages are created?

MultiCam® camouflages are developed on the basis of analysis and observation of the most repetitive elements of the natural environment. The formulas also take into account factors related to the climate, changes in weather conditions and terrain, as well as the intensity of light during the day. The main assumption of the MultiCam® camouflage concept is to ensure the highest level of efficiency. The designs created are a reflection of the initial designs, with customer suggestions and numerous tests, but we'll talk about that in a moment. 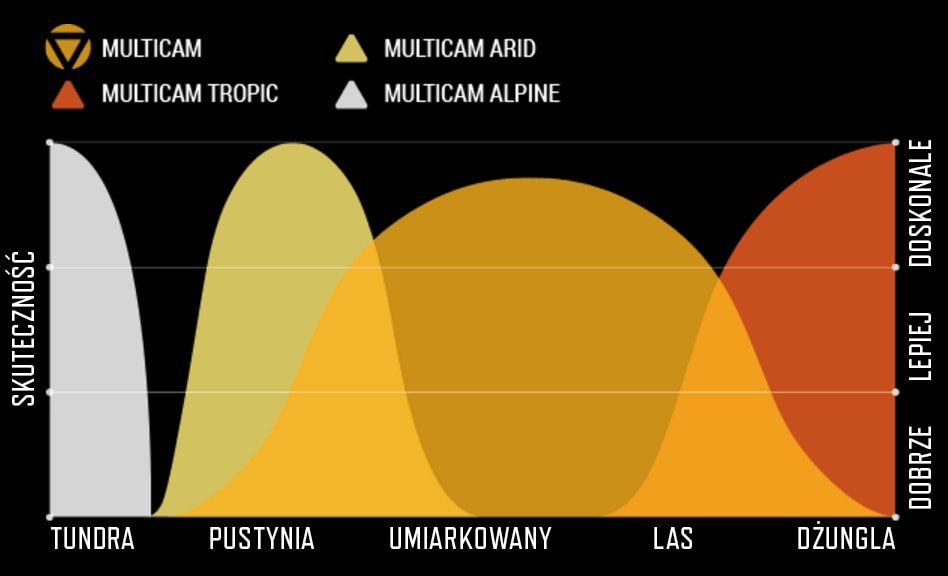 Camouflage effectiveness chart relative to the area where operational activities are carried out.
Fot.: http://multicampattern.com/

After the first stage (observations and analyzes), a preliminary camouflage pattern is developed. It is then subjected to numerous tests that allow Crye Precision to guarantee the effectiveness of a given masking pattern during field operations. An additional element checking the effectiveness of camouflage are consultations with a group of clients. Only after considering the suggestion is the pattern refined. After creating an improved version of camouflage, it is again tested. Only when the design passes all the previously set requirements, is it introduced to the market. 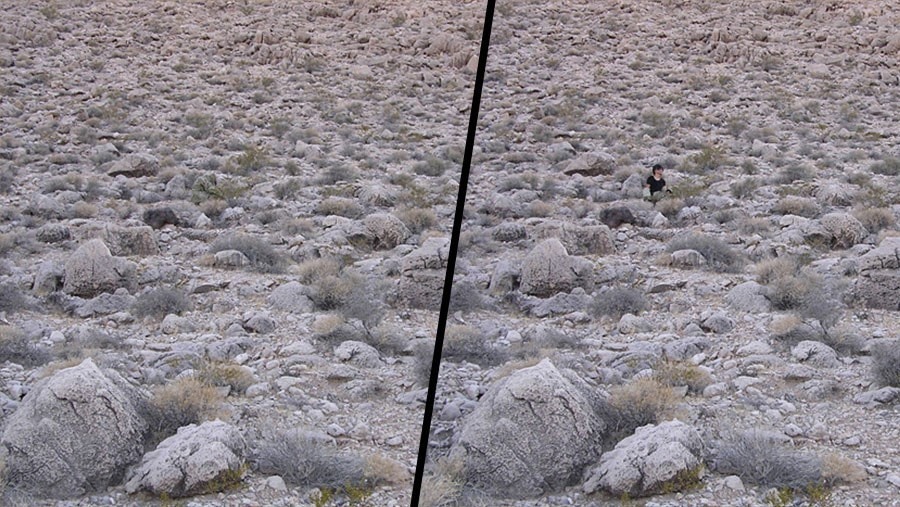 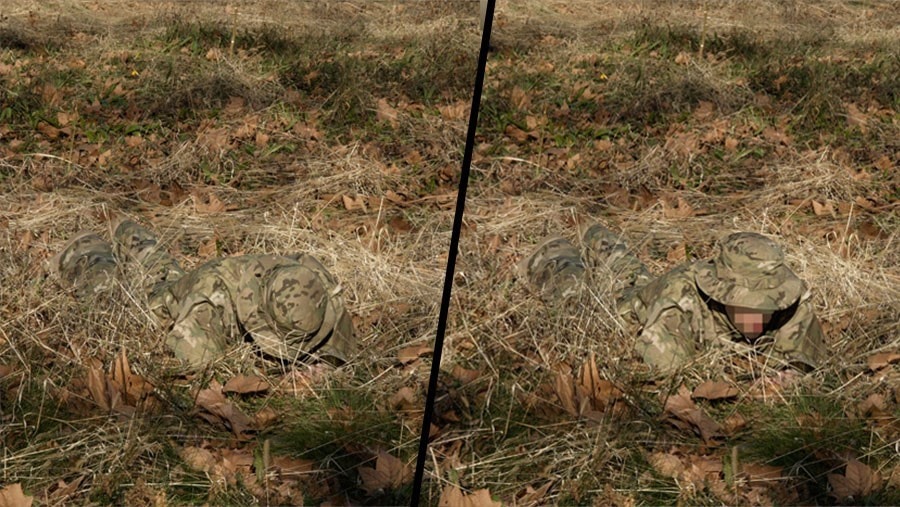 Multicam in a grassy environment 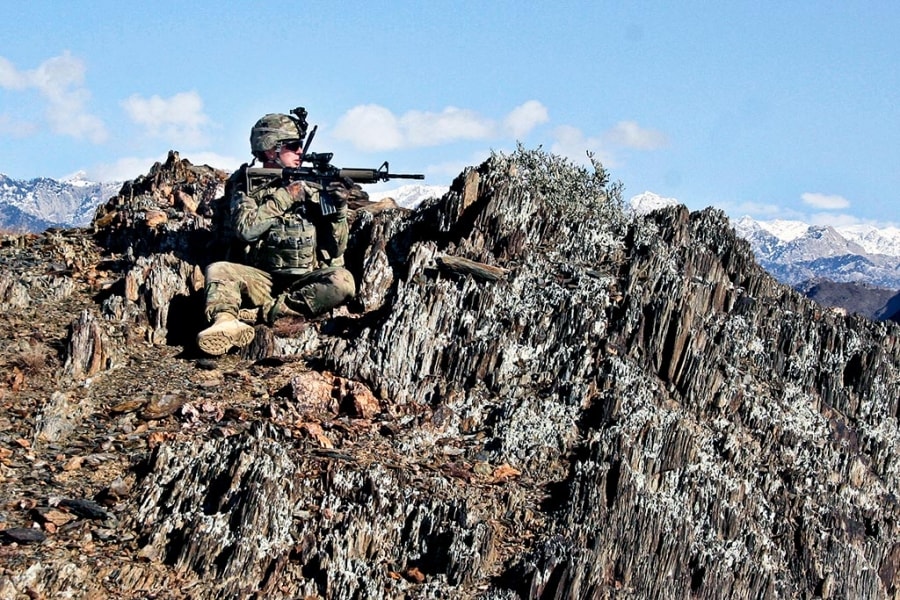 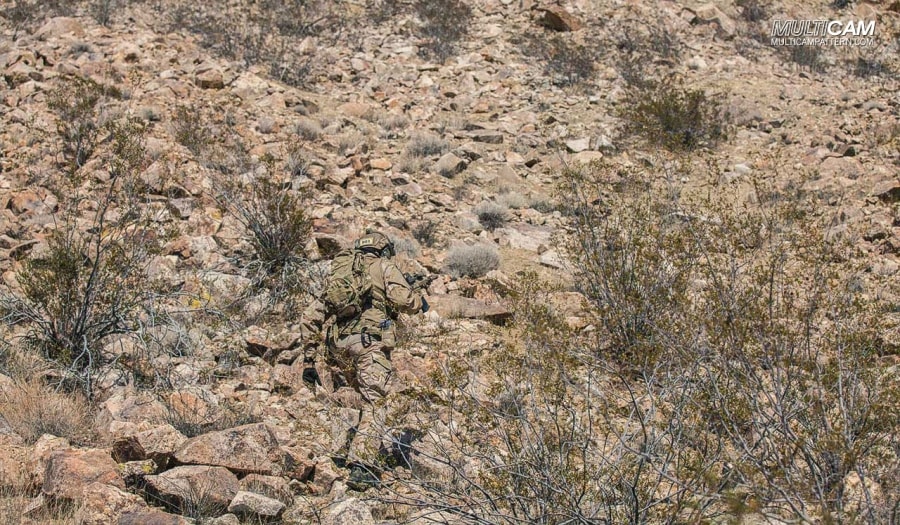 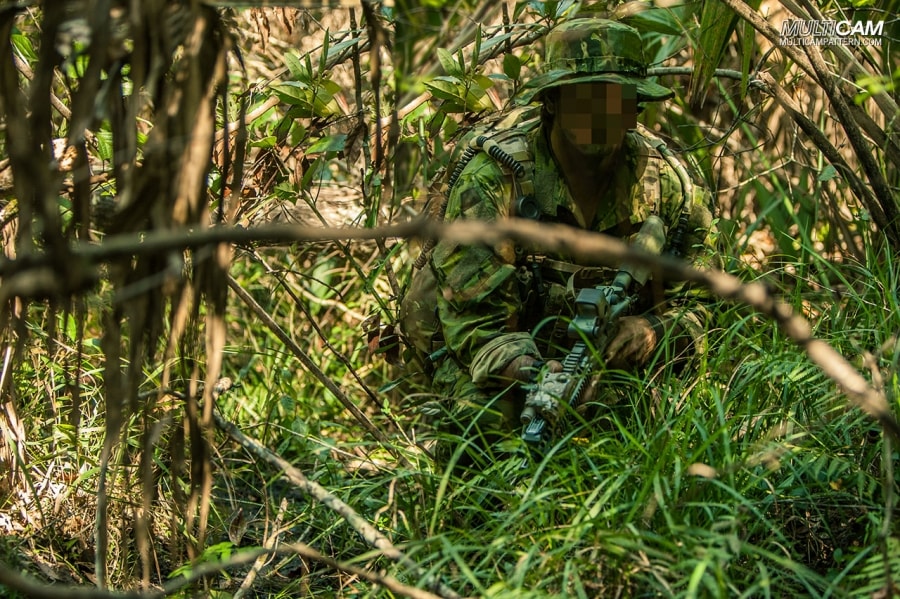 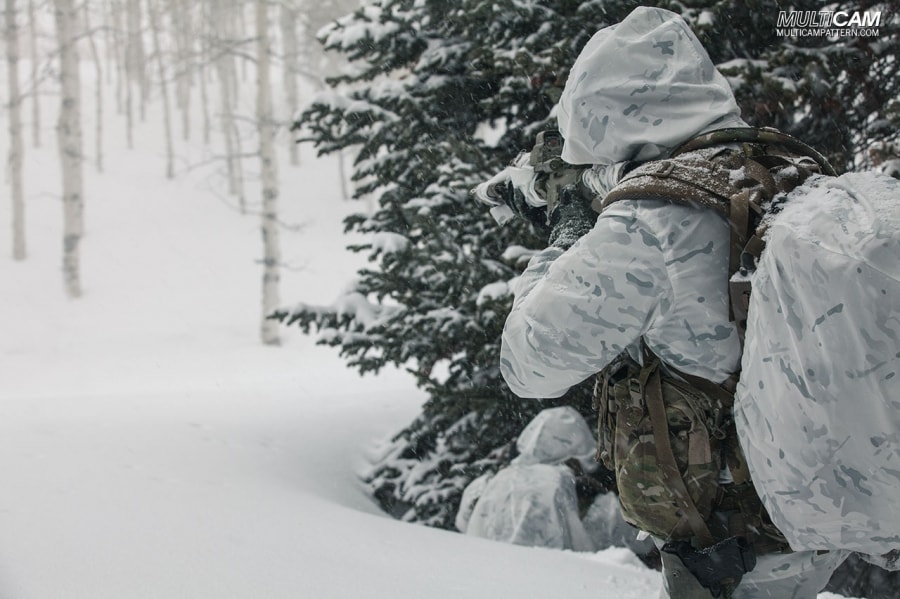 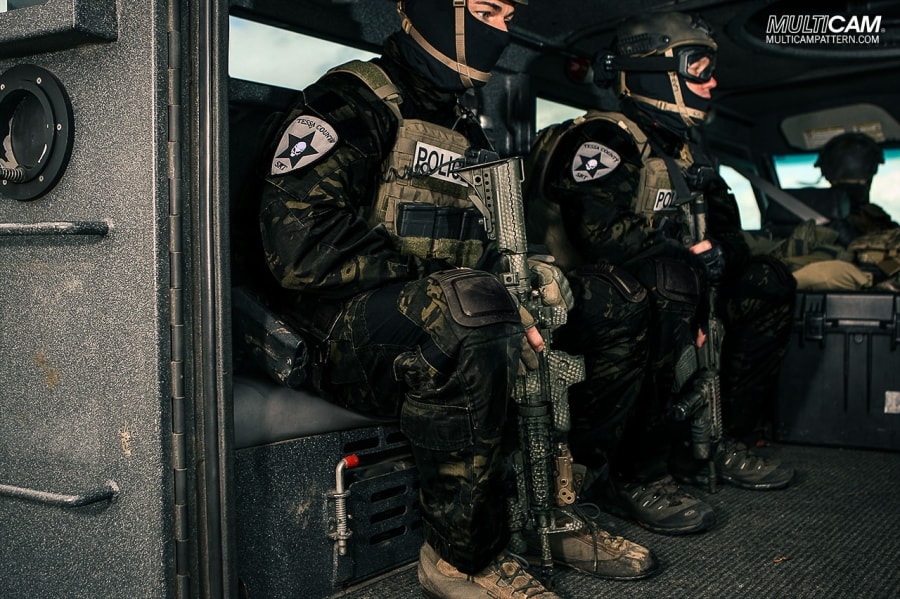 Application of the MultiCam® camouflage types shown in the natural environment: 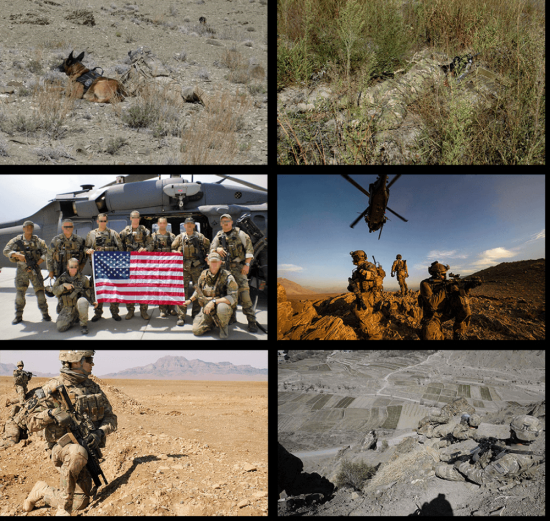 Example use of MultiCam Camouflage

Finally, a curiosity, i.e. MultiCam® in other countries:

1 Frogskin - the name of the camouflage adopted by soldiers of the U.S. Army. Camouflage was developed from 5 shades of green and 3 shades of brown.