MOLLE, LCS, OPS, QR and others - specification of tactical vests 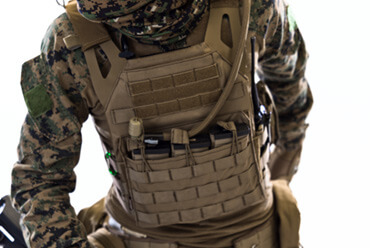 Often on many military or tactical forums, there are questions like "what tactical vest to start with" or "will anyone recommend a good tactical vest to ASG". It is known that each user has his own opinion and it is not always clear which vest to actually choose. That is why we have prepared for you a clear statement to help you understand the specifications of tactical vests and the functions of individual elements. We invite you to read it briefly!

Modular lightweight handling system for US Army soldiers. The MOLLE system has been designed to increase the mobility of US Army soldiers and provide them with greater carrying capacity than the ALICE system.

Modular pocket and pouch attachment system developed and patented by NSRDEC. It consists of horizontal rows of tapes, each 25mm (1 inch) wide and stitching every 40mm. PALS is part of the MOLLE system. 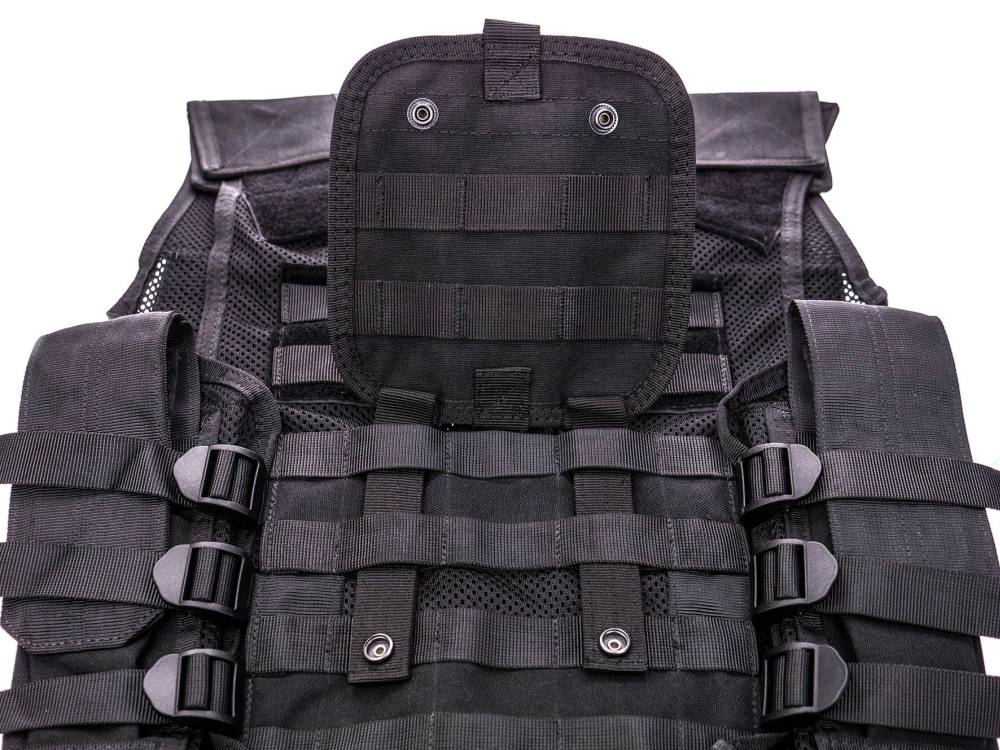 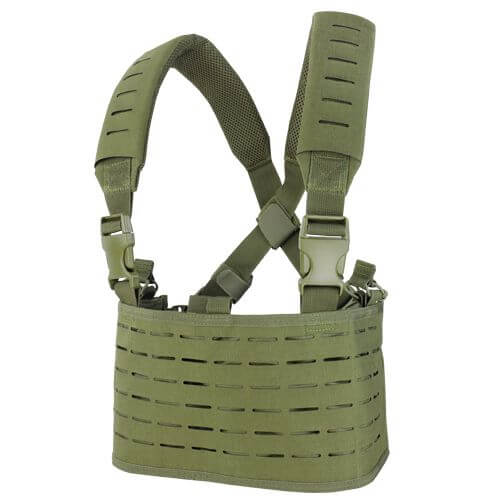 An American personal gear transfer system that replaced the LCE and MLCE systems.

The ALICE system is the result of the LINCLOE (Lightweight Individual Clothing And Equipment) program, the idea of which was to develop a lightweight transfer system that would reduce the overall load on soldiers.

Tactical vests, which were used during operations on the Indochina Peninsula (1961–1975) during the Vietnam War era. They provided adequate air flow, which in turn increased the carrying comfort during hot weather.

It is because of proper air circulation that some units, despite the order to wear flak jackets, decided on LBV vests, at the same time exposing themselves to greater damage during the explosion.

In later years, LBV vests were modernized to increase the level of protection and safety of soldiers, protecting them against emerging threats, including IED bomb explosion. 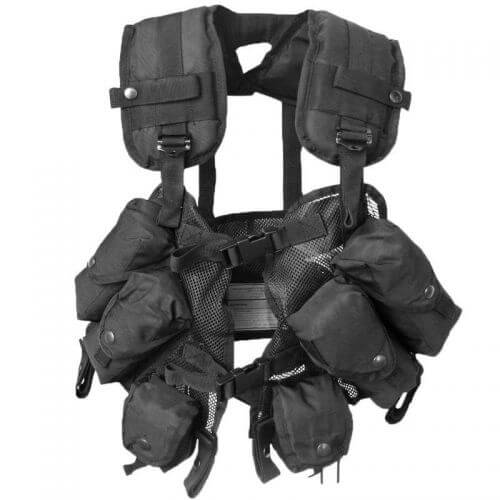 Tactical vest designed to increase the amount of ammunition carried by soldiers. The FLC model allowed even weight distribution of the carried equipment.

Vests with OPS specification provide comfort during fast movement and help to protect the user while on duty. OPS vests and chest rigs have built-in or modular magazine pouches. 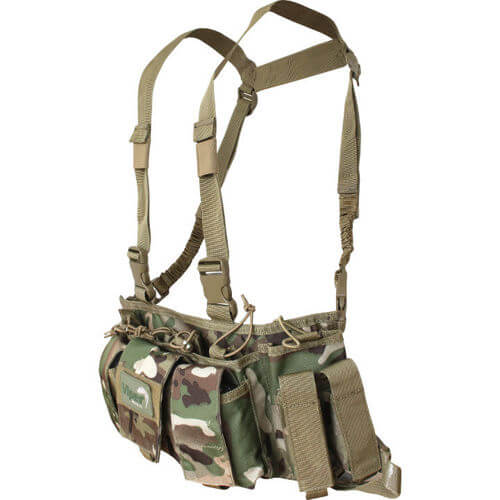 A non-profit organization cooperating with law enforcement agencies in the field of law enforcement and conducting tactical and protective training for special units of police and soldiers.

Low profile vest (outer), so-called plain has a body-fitted construction and is most often worn under a Plate Carrier vest. Most low profile vest models are designed for soft ballistic inserts.

Soft ballistic inserts protect against debris of those places on the body that are not protected by hard inserts. In addition, they reduce and absorb the impact force of a hard ballistic insert. The combination of Plate Carrier with a plain or concealed vest allows you to completely protect your body.

The cummerbund belt increases the carrying comfort of the vest. Depending on the size, type and manufacturer, the cummerbund is equipped with pockets for hard or soft side ballistic inserts. 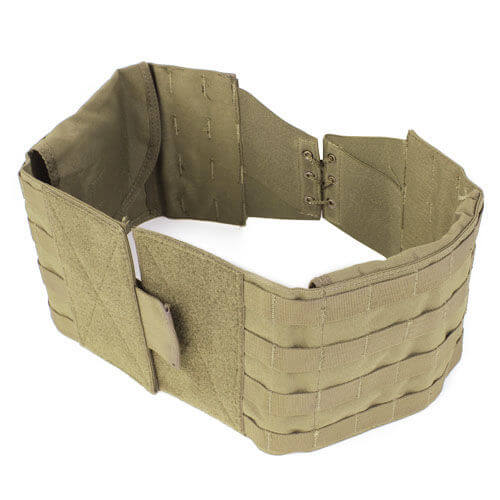 A separate ballistic plate pocket is a perfect solution when the vest or cummerbund belt is not equipped with a ballistic insert pocket. By using these types of pockets, you increase your level of protection during field operations, on a mission, or during tactical operations. 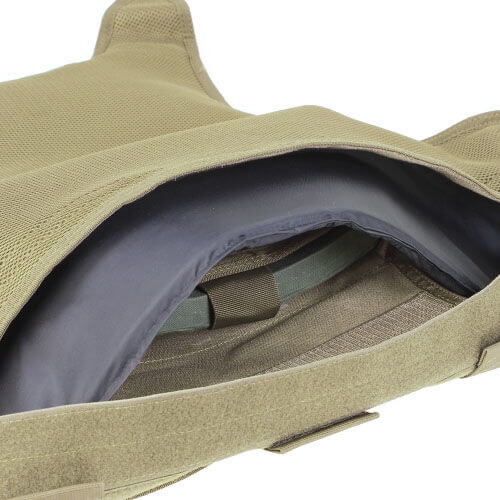 Quick-Release buckles are extremely useful at some critical moments on the battlefield or during hunting when you are forced to throw off your vest.

It is at the moments when time is the most important, the ability to quickly drop the vest, shows the difference between ordinary buckles and QR buckles. 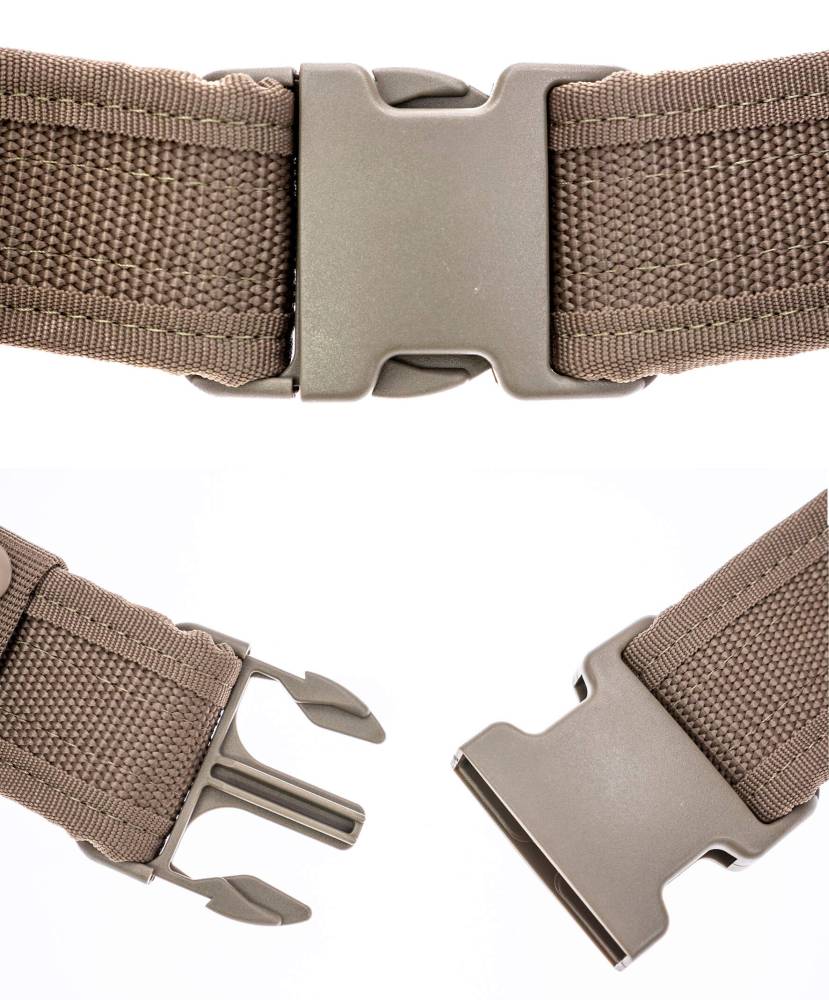 Vests with pockets for irrigation (hydration) system are much more functional compared to traditional, classic models.

In a situation where access to water is limited, it is worth wearing a vest compatible with a hydropack or one with PALS straps to which an external hydration system can be attached.

Remember! Regardless of whether you play a paintball round, fight for the country or take action on the action for several hours, it's good to know that hydration is as important as the amount of ammunition. 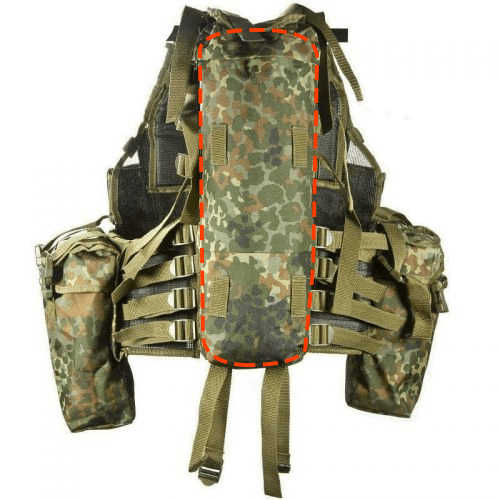 Rescue handle for easy pulling out of the water, pulling away on the battlefield or evacuating a wounded person. 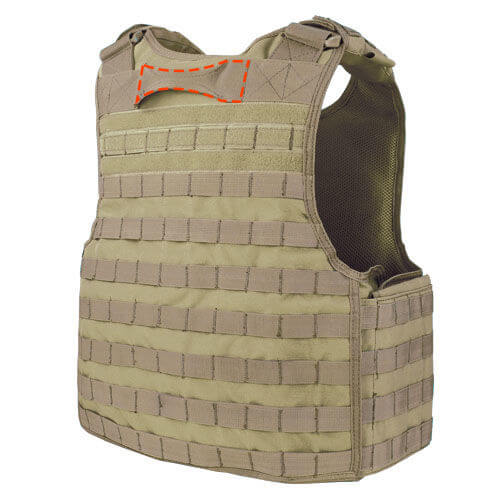 The ability to fully adjust tactical vests (vertically and horizontally) increases wearing comfort, convenience of use and freedom of movement in the field.

Shock Stop - so-called shooting panel is a special overlay or built-in panel that absorbs weapon recoil and facilitates stable holding of the butt in the right position. 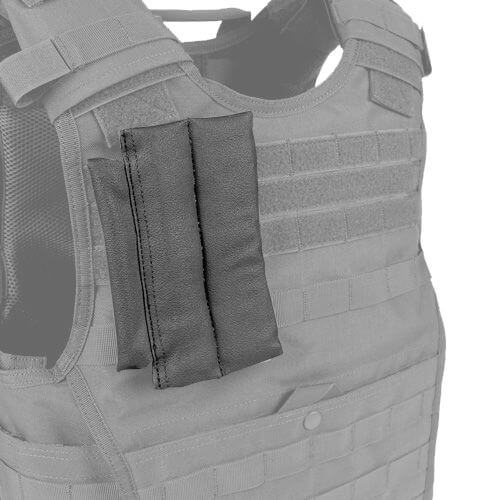 H-Harness is a H-shaped harness. This arrangement guarantees even distribution of the weight of the equipment and protects against excessive overheating of the body. H-type shoulder straps, compared to the Y type, provide greater comfort and are easier to adjust. 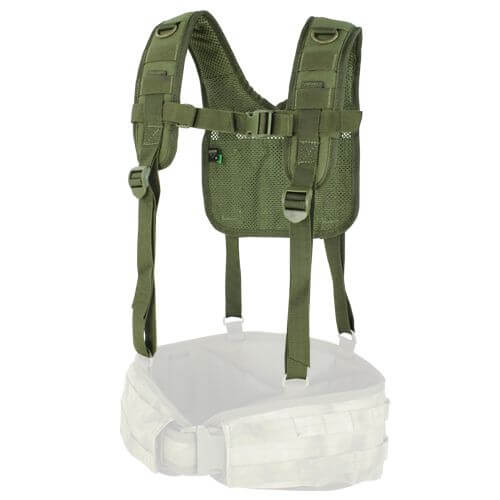 The low-profile pocket has a compact design, i.e. a lower and smooth external wall profile. This means that the pocket with the contents inside is flat on the outside. This design facilitates convenient and imperceptible transfer of content. What's more, the empty pocket / pouch low-profile does not stick out. 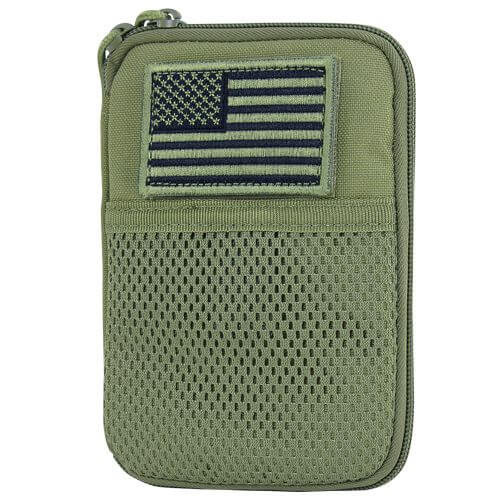 The D-Ring is a D-shaped piece of equipment used primarily as an attachment point. The D-Ring allows you to attach additional equipment and equipment, and attach a chest ring to the tactical belt.

D-Rings are used not only in tactical vests, but also in backpacks, weapon suspensions etc. 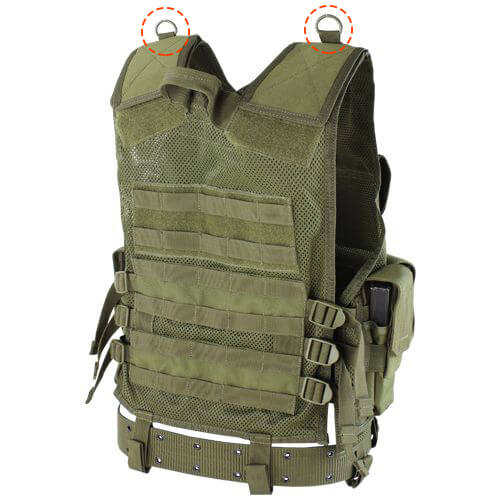 Patch Panel / Velcro Morale Patch Panel is a specially designed and designated place on the tactical vest, which is lined with Velcro, e.g. Velcro. 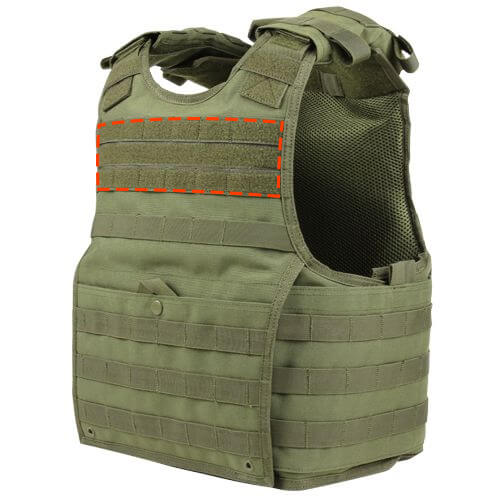 MOD straps is a type of attachment for MOLLE equipment. They make it easy and convenient to attach equipment, tactical equipment, as well as various types of military accessories.

MOD straps can be attached to any equipment with MOLLE / PALS system. 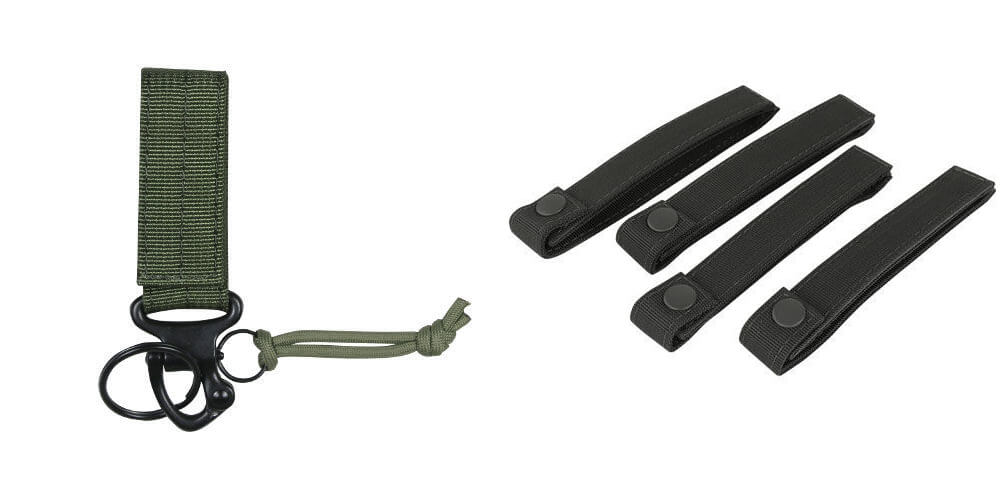