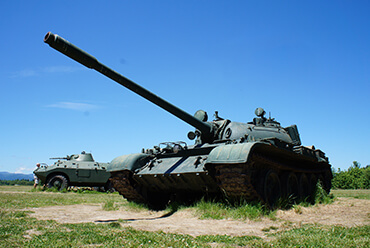 As our trusted survivalist Kajetan Wilczyński says: a tank! The soldiers using the caterpillar wagons have their holiday – Tankman’s Day is June 17. The Feast of the Armored and Mechanized Forces is a reminder of the arrival to the homeland of the 1st Tank Regiment, which was created in France on the initiative of, among others General Józef Haller. In mid-June 1919, 120 light Renault FT 17 models were delivered to Łódź, which made the Polish armored forces fourth in the world in terms of strength. It is worth noting that it was the first armored weapon of the Second Polish Republic, which, shortly after its formulation, underwent a baptism of fire at the Battle of Bobruisk. On the occasion of Tankman’s Day, we decided to act outside the box and created a list of 5 noteworthy songs about tanks or songs and videos related to armored weapons. We invite you to check it out!

The 1960s mega-production, “The Four Tankers and a Dog”, got many songs, including “Ballad about tankers”, better known as "Rains restless" - from the very first words of the song. Edmund Fetting sang about Rudy and Szarik on the basis of Agnieszka Osiecka's text and to the rhythm of a melody composed by Adam Walaciński.

What machine was - let's risk this statement - the most famous tank in Polish pop culture? The Rudy 102 was, depending on the section, the T-34 1941/42 model or even the 5-seat T-34-85, i.e. medium tanks of Soviet production. It is worth noting that the T-34 was the basis of the armament of the Soviet armored forces in 1941-45, and its production during World War II surpassed all other models, also in other countries. An interesting fact is that the song about the faithful armored personnel can also be heard in German and Czech, because it was in the languages of our western neighbors that the dubbing to the legendary series was made.

Ghost Division - armored forces in the rhythm of heavy metal

Who were the T-34 tanks against, such as the serial Rudy 102? One of the most famous German units on the Eastern Front was the 7th Panzer Division, also known as the Ghost Division - very fast and appearing out of nowhere. However, the song of the Swedish heavy metal group Sabaton relates to an earlier episode, namely the attack of Major General Erwin Rommel on France. If you want to listen to heavy guitar blitzkrieg sounds, reach for power metal track by Swedes.

Abrams in camouflage, or rap about tanks

The rapper Jeżozwierz, known in the Polish hip-hop underground, dedicated a whole song to Abrams. You don't need to be an armament specialist to know that it is a US-made main battle tank, produced from the very beginning of the 1980s until today. The continuously modernized M1 Abrams is produced with depleted uranium armor plates and without depleted uranium e.g. in the export versions M1A1 and M1A2. The Polish rapper also referred to the content of this radioactive isotope in Abrams anti-tank missiles. Tank rap - is it possible? Yes, it is!

How to make a modern music video about Soviet relics?

The most modern song from our list is Uebok (Gotta Run) by the Belgian producer Apashe, featuring a Russian rapper named Instasamka. References in the text to Rambo are a bit too little to treat the work as dealing with armored forces. Fortunately, the BMP-1 armored infantry vehicle is racing across the fields in the video. Interesting fact - the BMP-1 combat vehicle was produced only in the USSR and Czechoslovakia, although in 1966 Poland received permission to license the production of the vehicle. However, the cost of its launch turned out to be too high - the idea was abandoned.

In the video clip, apart from the BMP-1, you can also see other relics of the Soviet system, including drifting Lada, in the background of which a man lights a cigarette, using a gas burner. The picture is also completed by men in headphones, a bear or Soviet architecture - what more could you want from a Russian music video?

Tank - Kaczmarski sings about the T-34

"The Russian tank will not fight for the Poles" - of course, we are talking about the Warsaw Uprising. Kaczmarski sang a moving text with a strong voice, inspired by the idea of Włodzimierz Wysocki. The Polish bard wrote about the taken off headphones, buried caterpillars and the cynical inactivity of the Red Army, which was waiting nearby with the T-34 we have already discussed.

Of course, there are definitely more songs about tanks, as well as music videos in which the surplus creates a unique military atmosphere. Sabaton himself has dealt with armored vehicles in many songs, such as Panzer Battalion or The Future of Warfare. Tank metal also triumphs in Poland, because the Sabad team sings about the undefeated Polish tank (Mighty Polish Tank), which appears in the song as much better than American armored vehicles.