Fire - the basis of survival 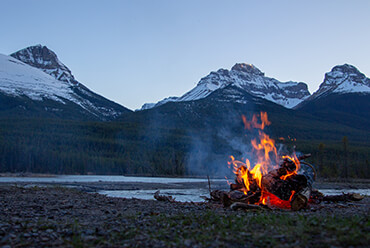 The Alps 2016. A small fire with its glow separated me from impenetrable darkness. In the background, all I could hear was the disturbing sound of a sliding rock avalanche, and each murmur seemed to be a bear that had smelled my provisions. Years later, I still cannot imagine that night without a fire that was lit before.

There are two main types of bonfires , useful in survival:

In turn the material needed to light a fire, i.e. fuel, is divided into three categories:

Hearth, i.e. the place where the fire will burn, must be secured against the uncontrolled spread of flames. Leaves, sticks and other flammable objects lying on the ground must be removed to form a circle of bare earth. Particular attention should be paid to dry grass, that can spread fire in no time. A circle of bare earth should be surrounded with stones or wet logs. The quality of the flame-blocking material must be taken into account. Stones should be smooth as porous stones can explode when heated, injuring people in the area.

It's a good idea to light a fire in a natural or previously dug basin. Thanks to this, the slight flame (in the early stage of ignition) will not be suppressed by gusts of wind.

Before we start lighting the fire, let's remember about the so-called burning triangle.

In short: to create a flame you need oxygen contained in the air (by blowing, we can supply more of it), pre-prepared fuel (kindling, lightwood and proper fuel) and a heat source (matches, lighter, tinder). If one of these three elements is missing, we cannot count on lighting a fire.