Crossing borders: Chernobyl part IV - Life in the Zone in the past and today 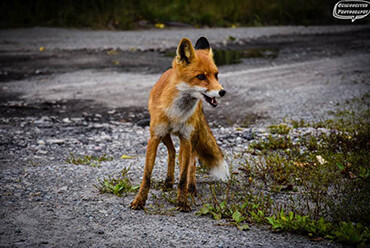 There are many legends and myths in Poland about the Chernobyl events of 1986. Many people think of this place in terms of strange creatures, mutated dogs and a desert without vegetation, others associate with a computer game and the struggle for survival, others more knowledgeable about the ruins and treat it as a dead city after the catastrophe in 1986. Many people ask me about my trip to that area and why was it my dream? I am pleased that I can share my interests, lead them out of mistakes and sketch a real picture of these wonderful (for me) places. 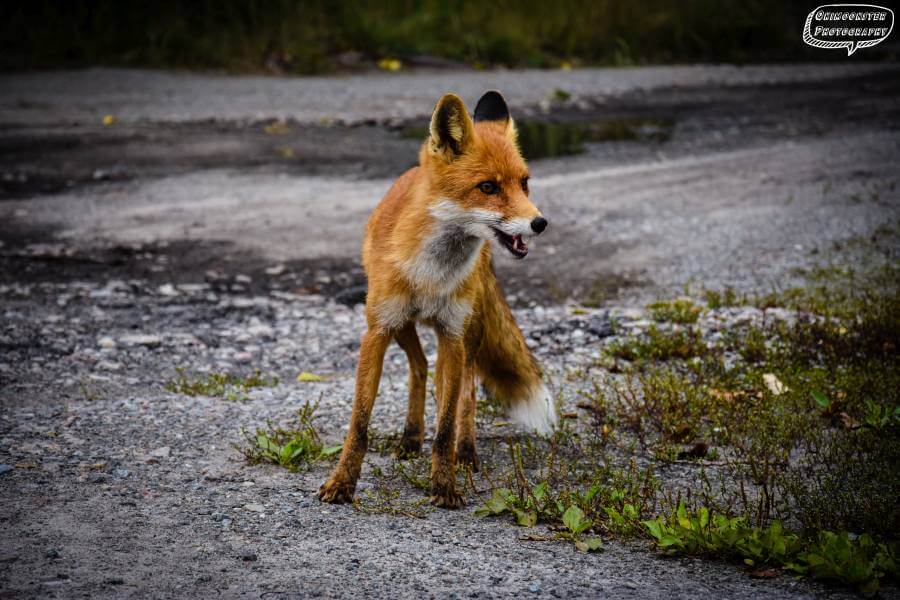 Pripyat and Chernobyl were two large urban centers, and functioned as normal large cities. People lived and worked in them, enjoyed themselves and experienced the hardships of everyday life. They have the same lives as we do now. Today, dead Pripyat has one inhabitant. It is a fox named Siemion. Who gave him that name? Perhaps the guards in the zone who make sure that it has something to eat, even when there are no tourists. Because it is mainly they who pamper and feed the animal with imported sandwiches and sweets. The fox is trusting, he approaches anyone who wants to bribe him, even with a small bite, so you can feed him from your hand. Meeting with Siemion was one of the few great moments in the zone. You can have different opinions about feeding animals, which should be predatory and be able to take care of itself. Only Siemion took advantage of the situation and adapted in his own way to the conditions in the extinct Chernobyl zone. And rabies? It's dangerous! An irradiated monster? And I was able to meet such questions. None of these things apply to this fox. Animals in the zone are monitored. Their population is counted and studied, such as stray dogs in the zone - descendants of these abandoned dogs, as if for a moment by their owners. Some of the animals did not wait for the return of their beloved owners, others escaped and lived in the zone, and their subsequent generations run around Chernobyl to this day. There are more and more animals, there are bison, foxes, lynxes, huge catches that nobody catches, giant terns, eagles and waterfowl of all kinds, and there are several times more wolves than in reserves. There are bears and wild horses. Even once the "rusted forest" has grown green in recent years. Nature is doing well without people and is taking over the area. It is a real paradise for bushcrafters, survivors and urban expolorers who can make their ideas about what the world will look like at its "end". 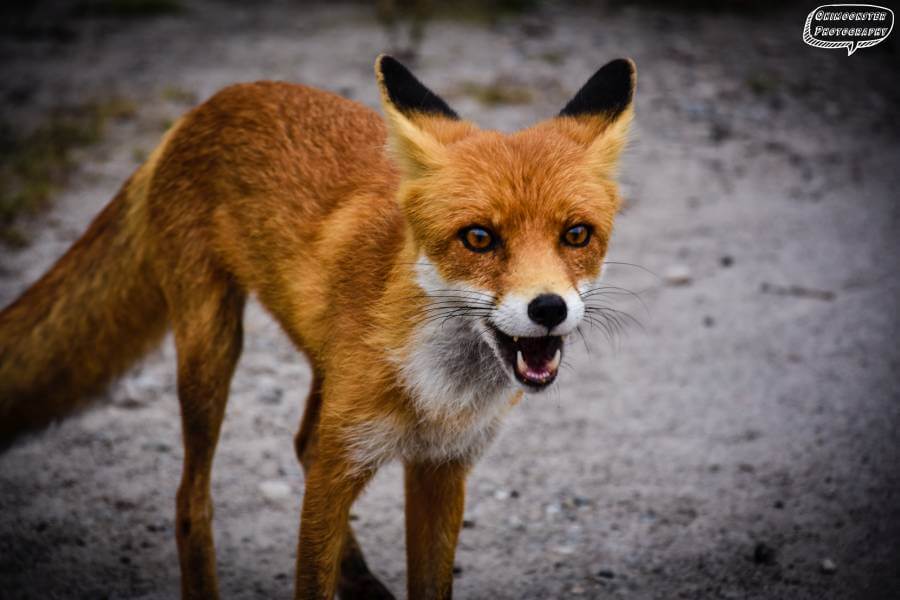 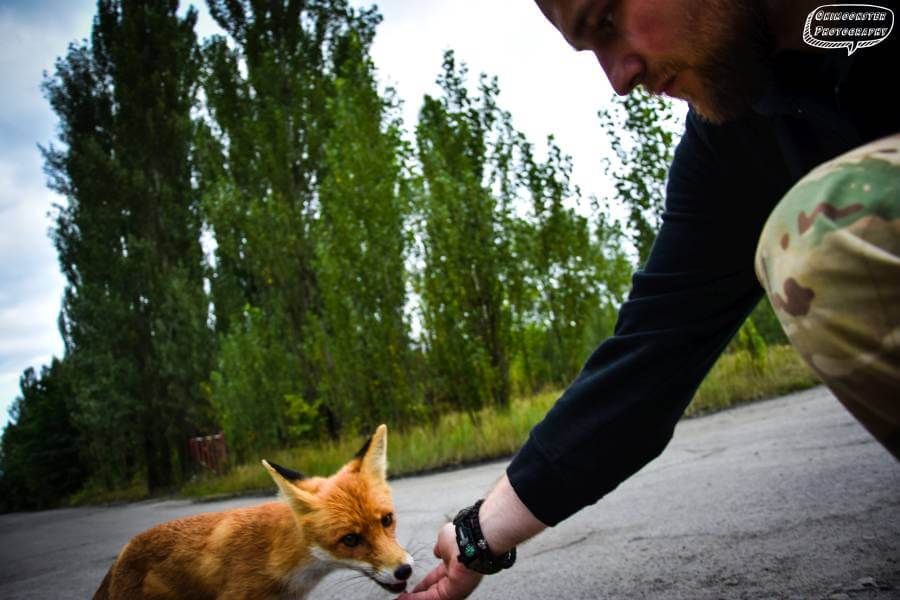 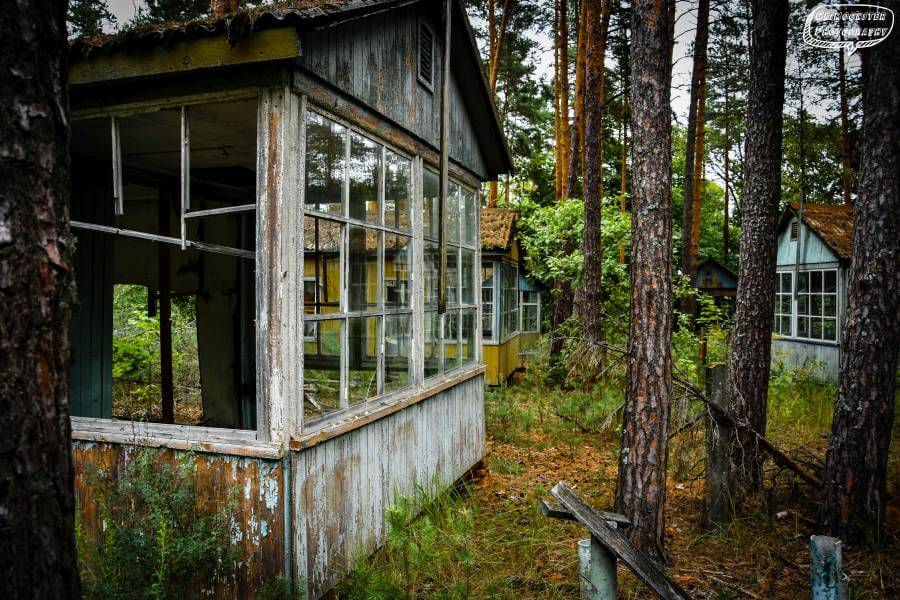 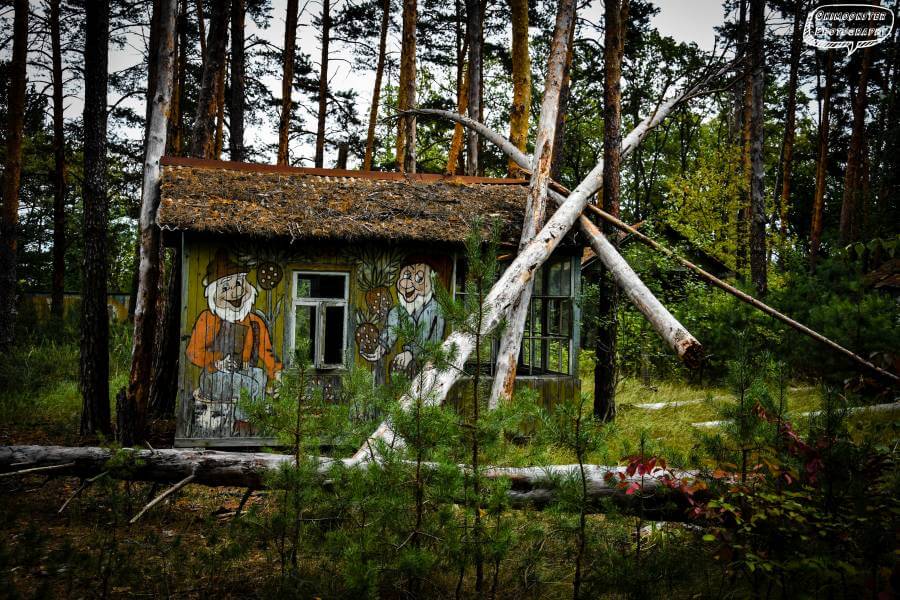 Areas acquired by nature today were once under the authority of a man who tried to tame this wild part of nature and make friends with it. Get a little closer. Halfway from Pripyat to Chernobyl, there was the "Emerald" recreation center, where young pupils of schools in Pripyat rested, families with children, and power plant employees who were entitled to forced rest. Charming wooden houses by the river in the middle of the forest resemble our Polish holiday resorts, where most of us spent, many a vacation. Today in ruin, there are silent witnesses that we will no longer hear the laughter of carefree children playing in these woods.

In non-urban areas there were forests and arable fields, managed in so-called kolkhoz, or agricultural production cooperatives. Land and crops belonged to the state, but they gave work. The invention of the old system, after which there were wrecks of agricultural machinery, as well as the "Magic Bus", in which I had to have a photo referring to one of the last photographs of Christopher McCandless, also known as Alexander Supertramp - a man who shaped my idea of traveling and way of life. The bus traveled around Pripyat, bringing people to work, and youth and children to local schools. There are many machines here, including those that removed the effects of the Chernobyl disaster; all filled with concrete, which gives clear indications on the dosimeter. Not far away I also come across a fairly large cannon. This is the wreck of the ISU-152 self-propelled gun. Was there an armored battle that nobody writes about? Not exactly. The battle, yes, but with the effects of a power plant accident, and the gun, thanks to its thick armor, protected the operator from radiation, serving, for example, to destroy buildings with its mass. 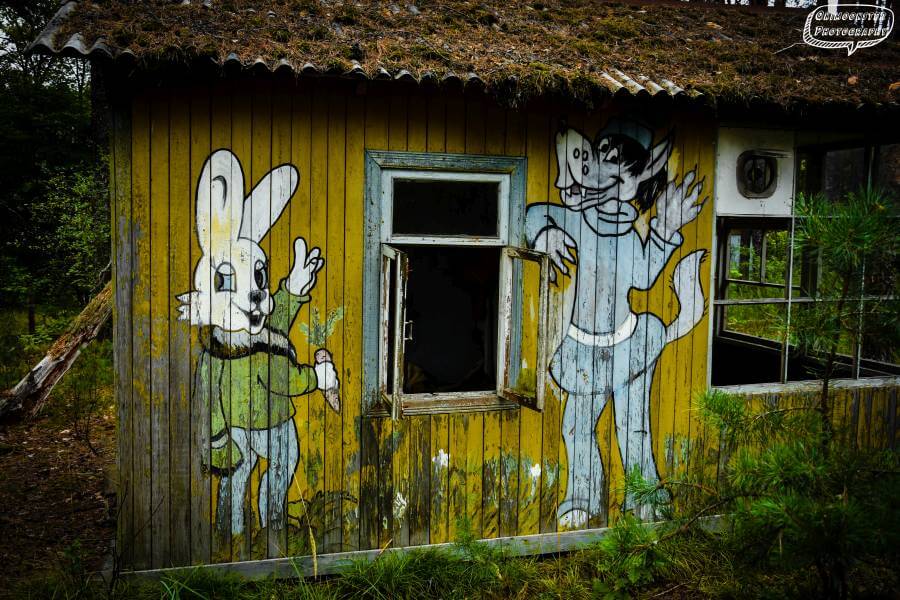 and known to the elders, Wolf and Hare
Photo: Patryk Qki Kwela 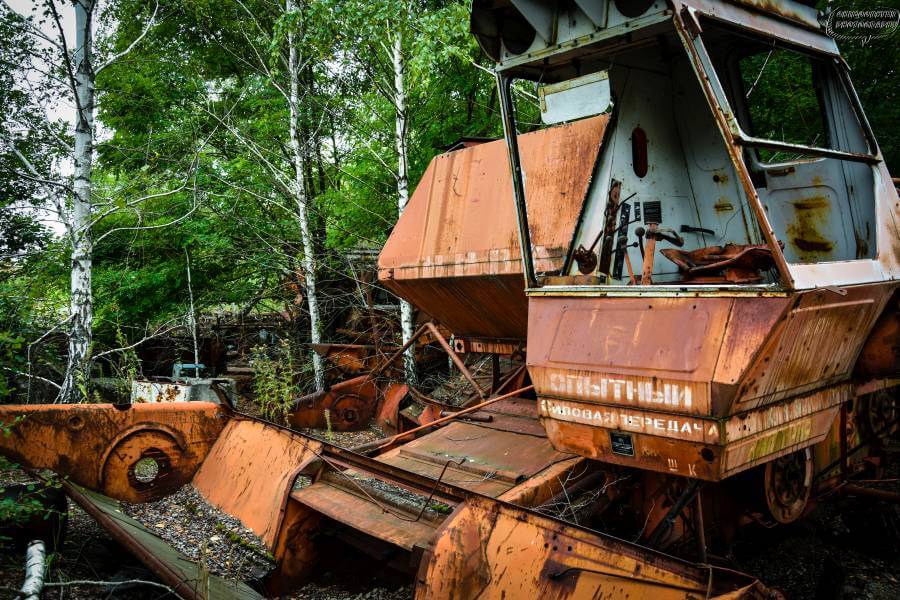 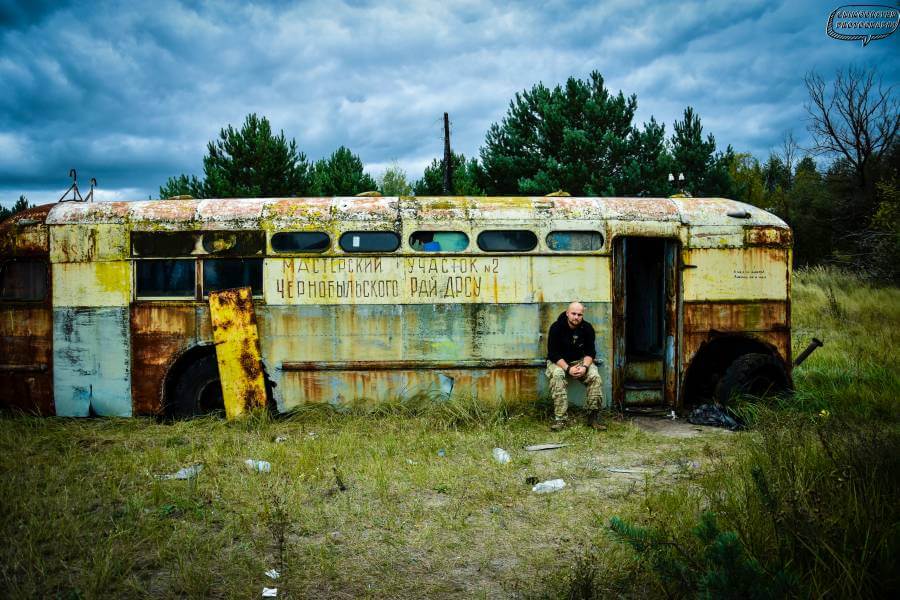 Someday I will reach Alaska to take a similar picture of the right magic bus
Photo: Patryk Qki Kwela 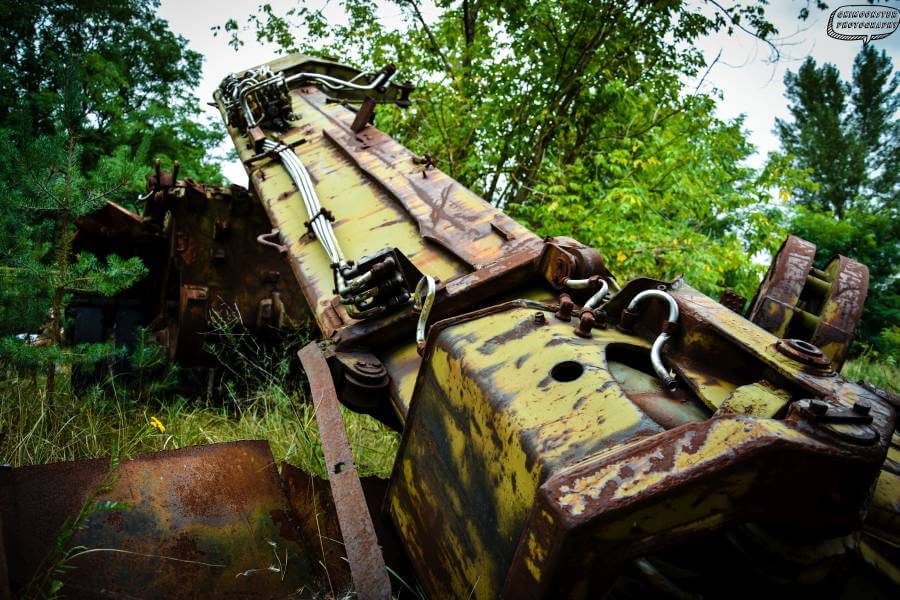 Machinery for removing the effects of the Chernobyl disaster
Photo: Patryk Qki Kwela 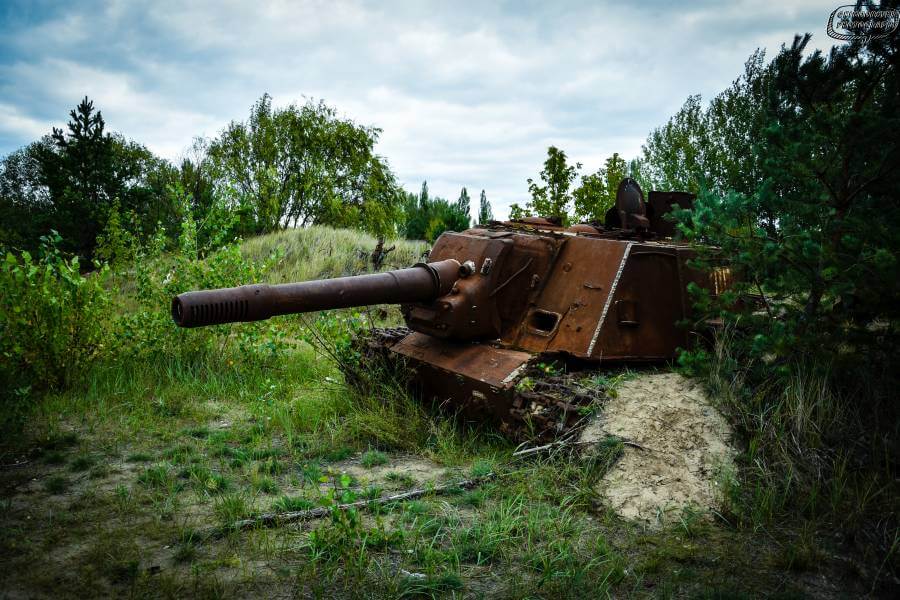 To get from Kiev to the city, it was enough to get on the train. A few hours and we would be there. Today, trains that took part in the evacuation of residents are standing on the tracks near the city. Locomotives and wagons are standing or lying on their side, waiting for the last whistle. A great treat for fans of the books from the Metro series by Dimitr Glukhovsky. Entering such a composition, you can feel like in a postapo world embedded in his novels. I sat on this train nostalgically for a moment, thinking about what views I could see from his window, what people I would meet on the way. Because the destination does not count, but the beauty of travelling. My way to this place is the years of dreams and implementation of minor tasks and goals, it is a joy of passion and hobby, which is the exploration of abandoned buildings, bushcraft and survival. During my travels, I met comrades from Poland, real enthusiasts of knowledge about the Zone, people who wanted to get to know the locations from the game, or fans of Glukhovsky fantasy, as well as people who remember what was happening in Poland at that time. I met stalkers with gas masks and wonderful Ukrainians who looked after us during a visit to the Zone.

Today I wrote and externalized more than in previous entries. The Exclusion Zone around the Chernobyl nuclear power plant, Pripyat, destroyed villages fill me with so many extreme emotions from sadness and nostalgia to joy and excitement. I want to show you the recesses of the Zone, to convince you to understand what a passionate and hobbyist is guided by, and what path and purpose each of us is taking. Chernobyl was my target. And this is not the end, now it will be only darker. 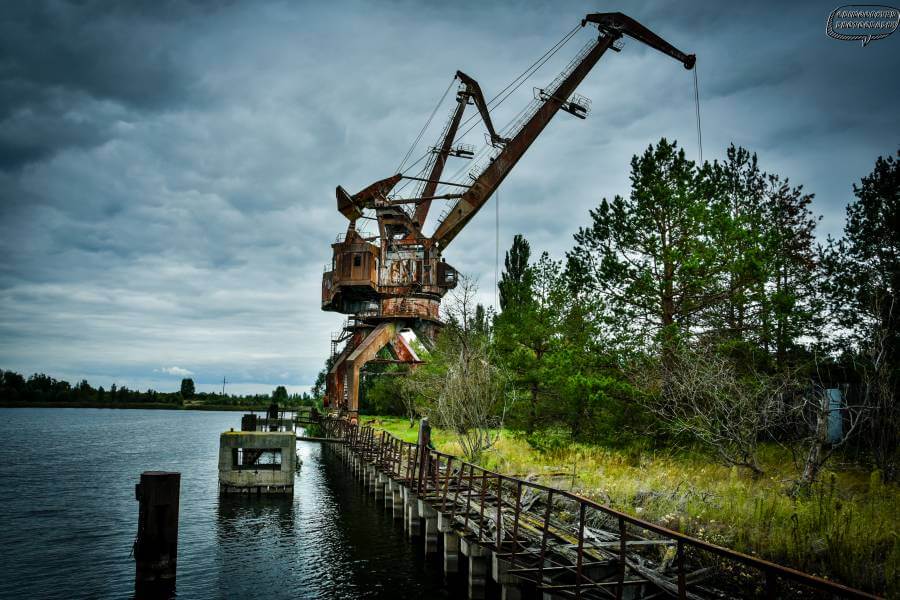 The port and cranes towering over the area
Photo: Patryk Qki Kwela 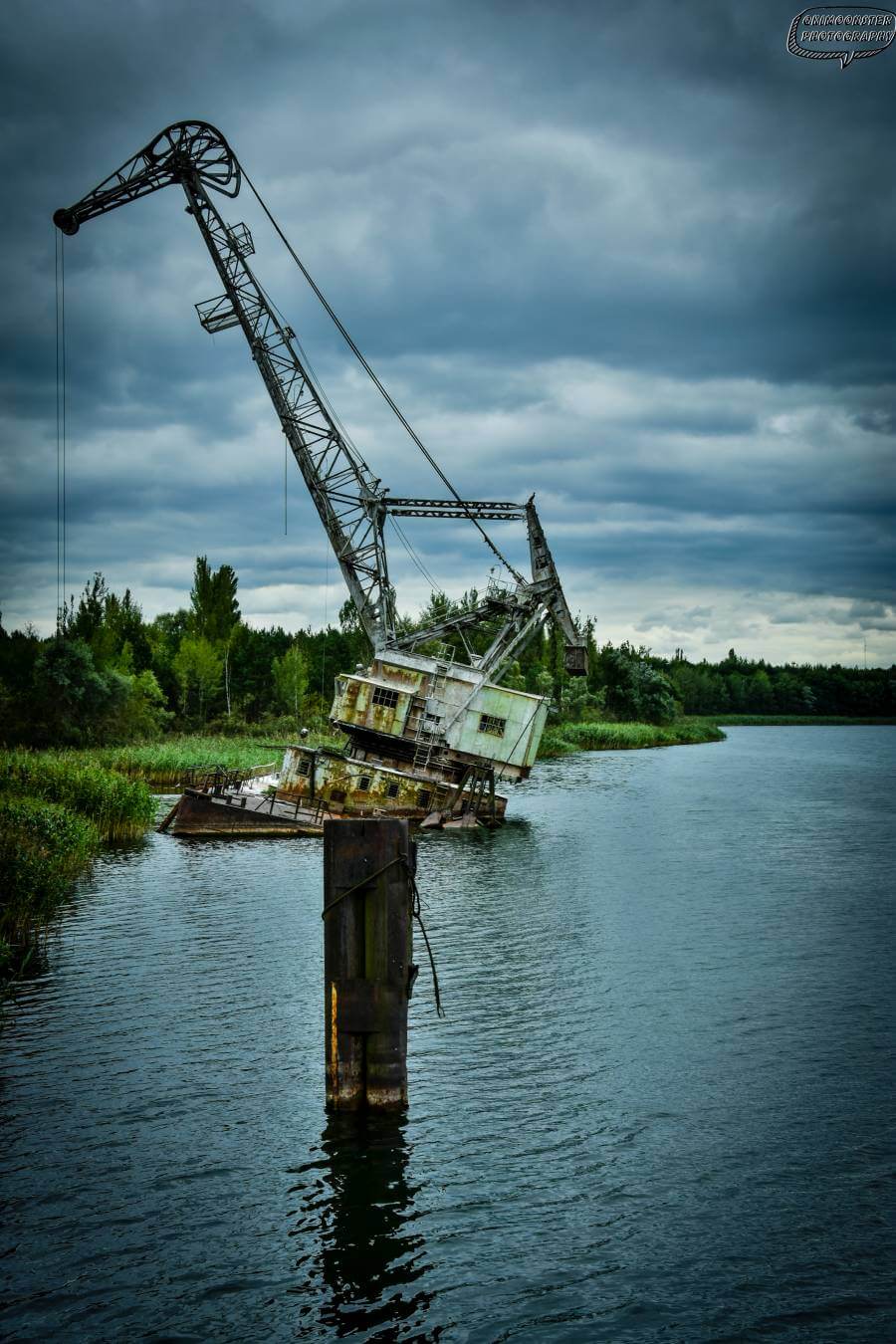 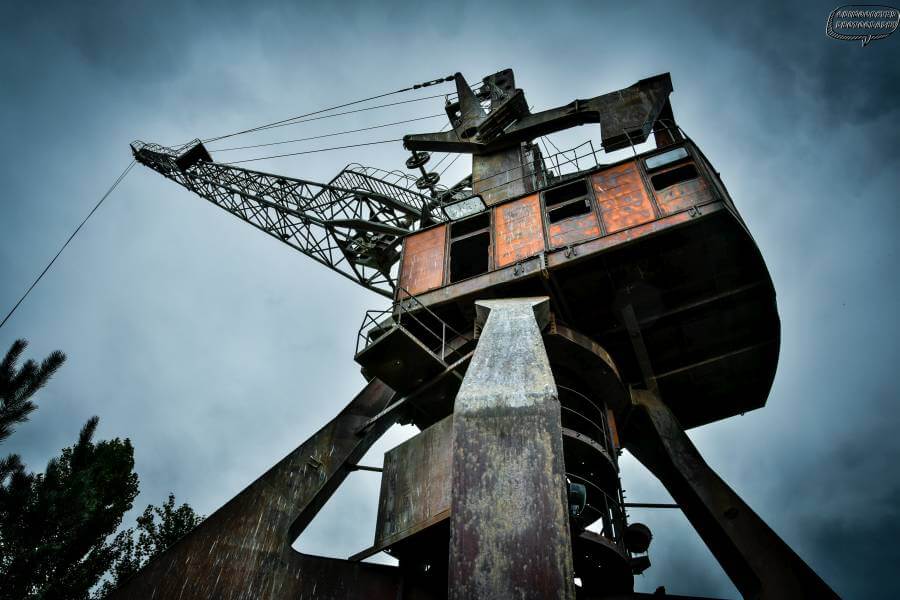 One of the cranes - I could not climb it because of lack of time, but I will go back there
Photo: Patryk Qki Kwela 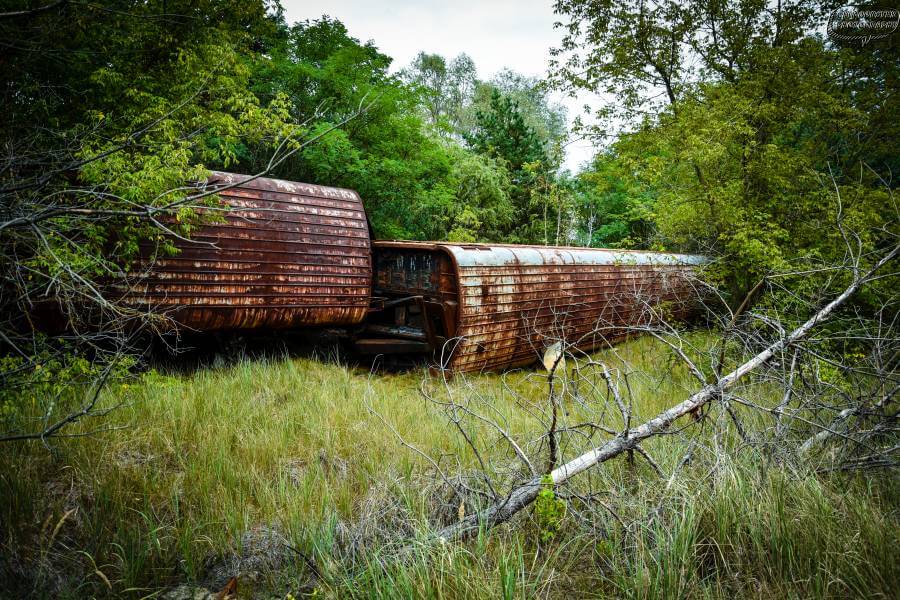 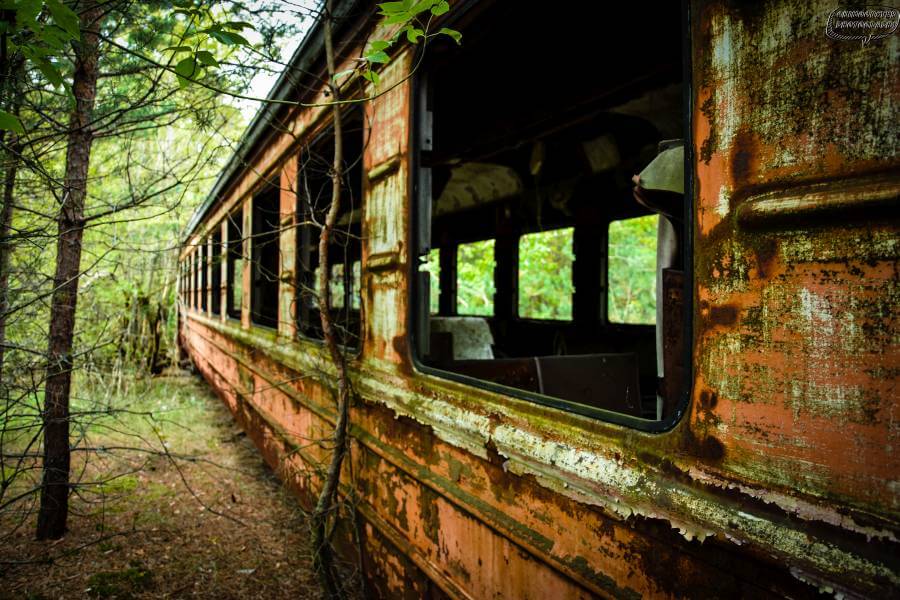 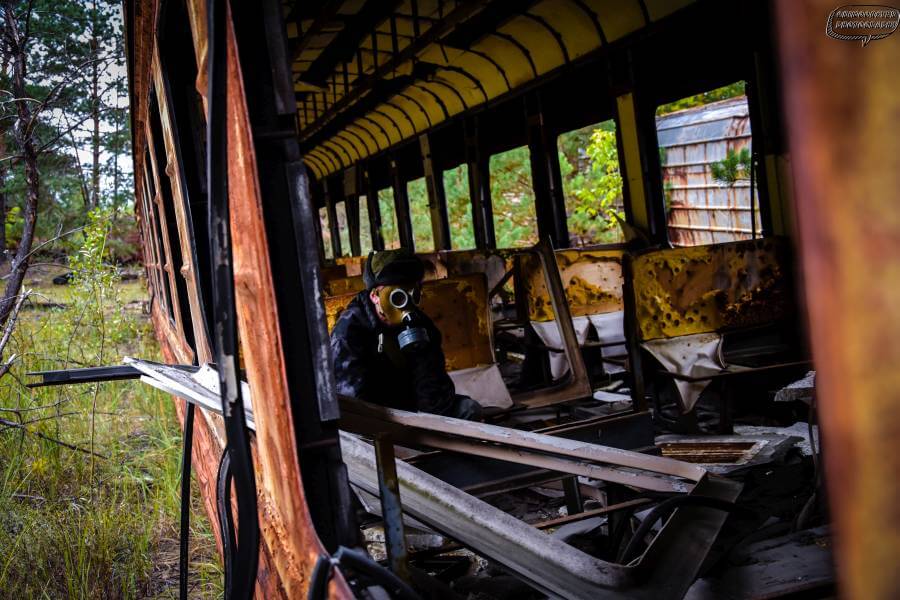 Crazy people who got in my way
Photo: Patryk Qki Kwela 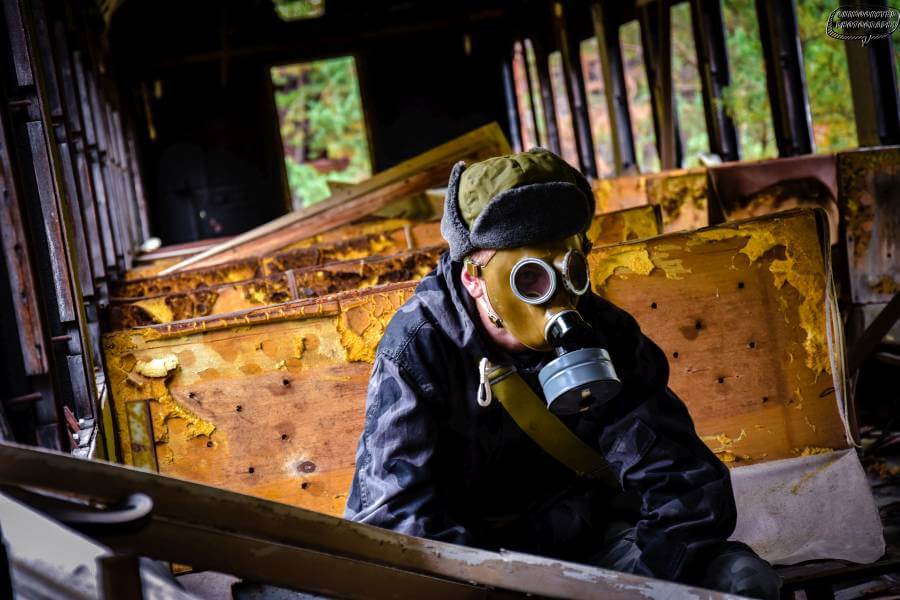 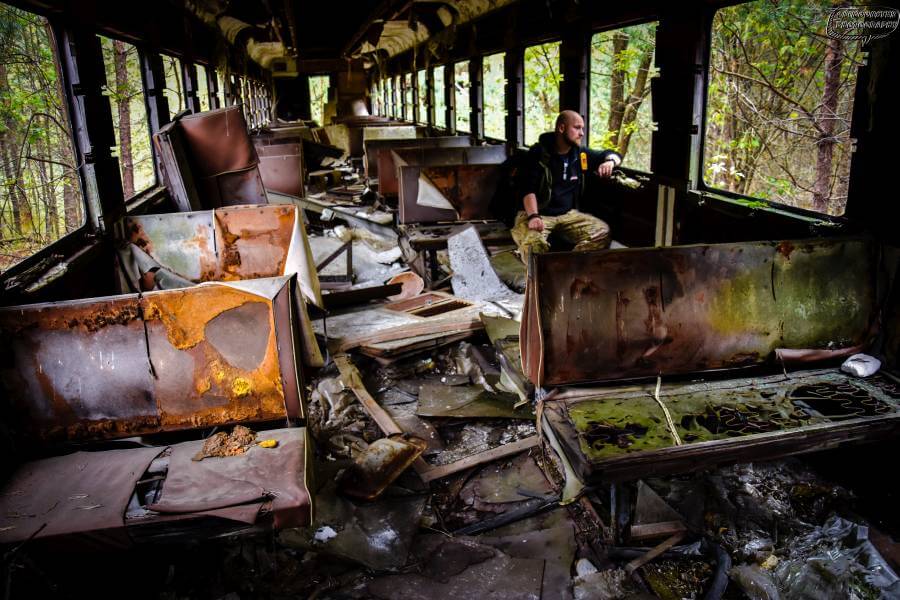 How could such a journey look like and what would be its purpose
Photo: Patryk Qki Kwela 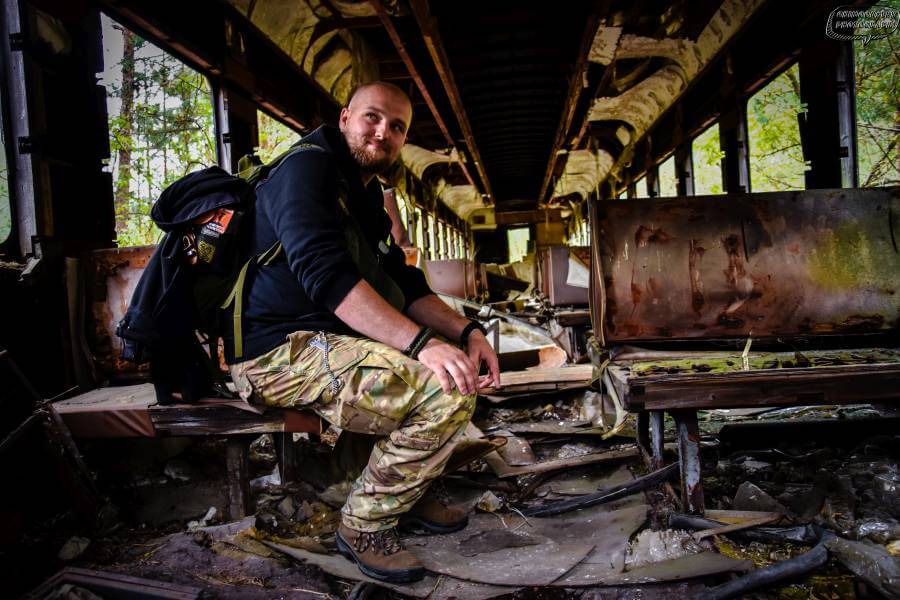 And the question is how did I get to this place, and why does it fill me with such excitement?
Photo: Patryk Qki Kwela 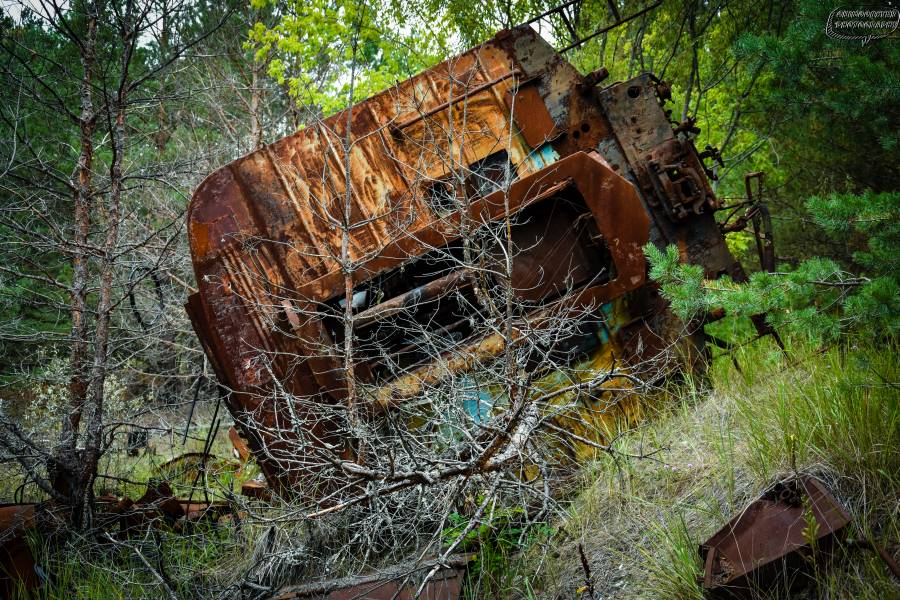 Passion for bushcraft, exploration and survival - all in one
Photo: Patryk Qki Kwela

He crossed the borders: