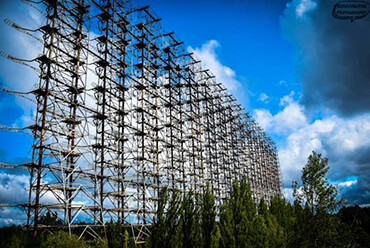 In Poland, called the "Moscow Eye" - a mysterious object near Chernobyl: what is it and does it work? What some heard about it, they talked about its legend, which has grown to the size of a creepypaste. Some time ago, the media contributed to the spread of interesting stories about what is happening there, describing that this radar is still working and broadcasting, which was to prove the recording of the characteristic clatter. What is happening there and what is the truth?

Literally and mysteriously called by Poles the "Eye of Moscow" reflects the fear of surveillance of eastern services during the Cold War. Americans refer to him as "Russian Woodpecker", which is related to the influence of radar waves, which on some frequencies caused characteristic disturbances resembling the knock of a woodpecker. For the Russians, it is simply Duga, which is a radar operating in the installation system of the Soviet strategic non-horizontal radar, whose task is to protect against ballistic warnings of ballistic missiles flying over the territory of the USSR. Duga is a set of two antennas, smaller with a height of 90 m and larger with a height of 150 m. The length of the entire structure is over 900 meters. It's hard not to notice such a large construction. For comparison, the height of the Statue of Liberty is 93 meters. 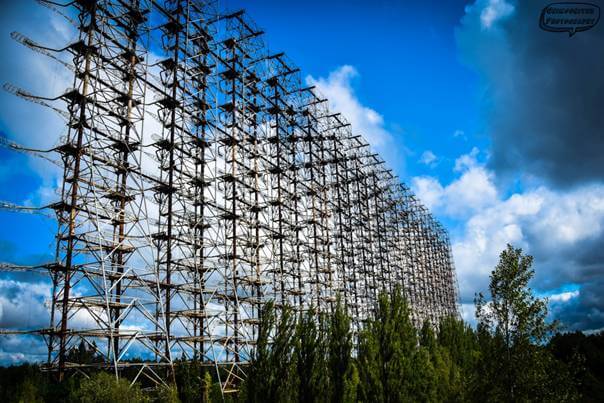 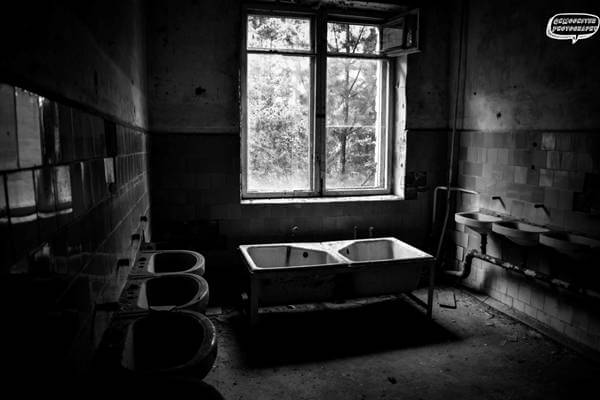 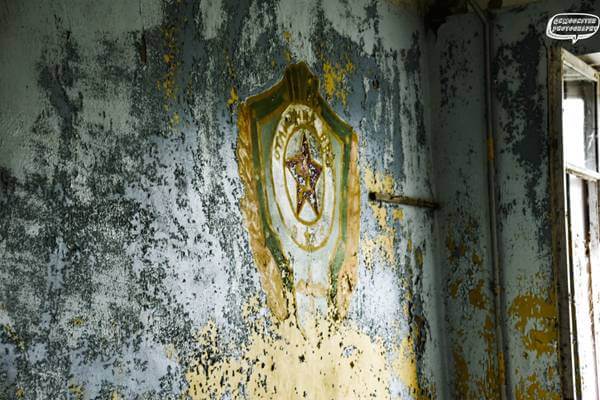 Sign of the past times
Photo: Patryk Qki Kwela 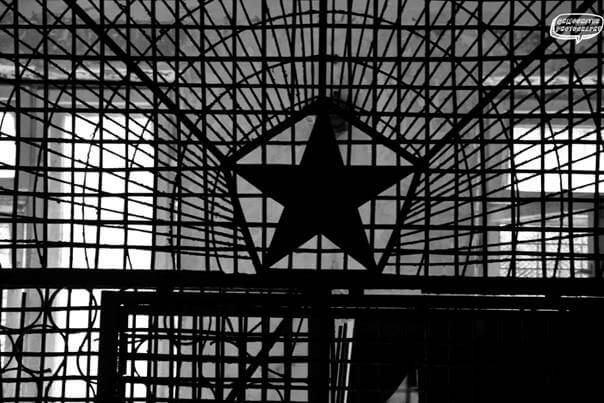 The ubiquitous star of the USSR
Photo: Patryk Qki Kwela

The radar is located about 11 km from Pripyat, and is visible from the roof of a 16-story apartment block. This means that the inhabitants of Pripyat knew about its existence. However, did any of them work there? No, because it was easier to build a complete garrison town - Chernobyl-2, where the army was stationed, as well as employees and their families, especially for radar and secrecy. 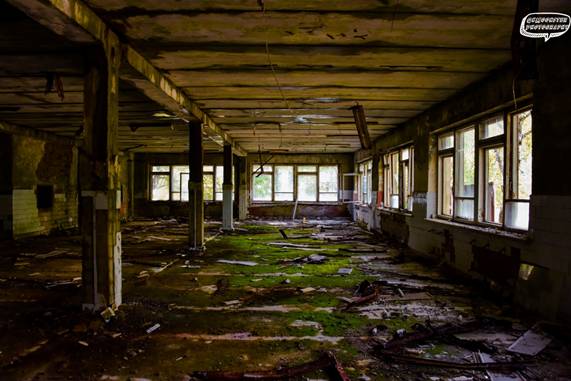 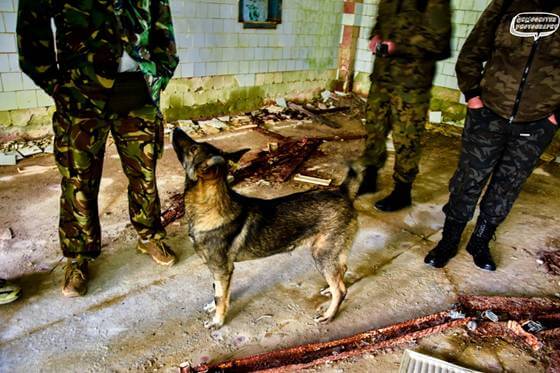 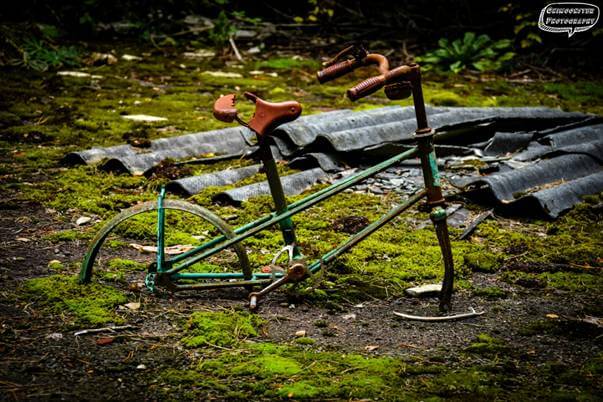 Children's bike in front of one of the kindergartens
Photo: Patryk Qki Kwela 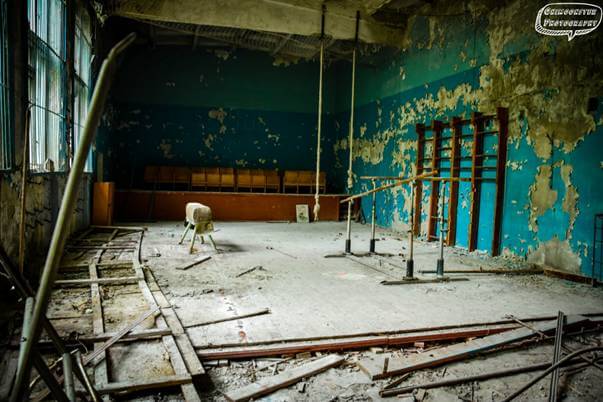 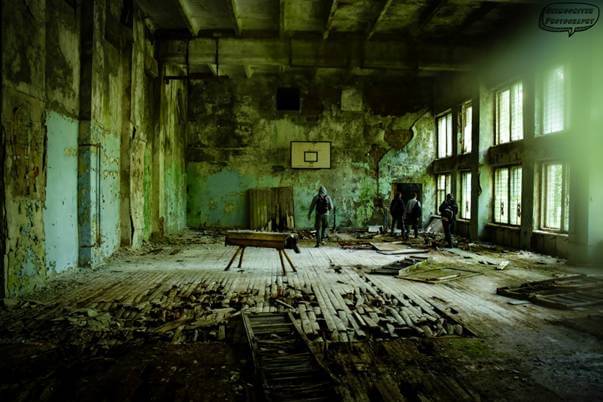 There were many schools and cultural centers in the city
Photo: Patryk Qki Kwela

For the city to be self-sufficient, there were shops, a school, a kindergarten and a theater in a walled and gridded area. Families had no reason to leave because everything was in place. Duga radar for an Urban Exploring fan is a real challenge, 20 footbridges to the very top of the highest antenna - I got myself up the ladders to half the antenna, from which I had a view of the entire zone, the red forest and the Chernobyl power plant. 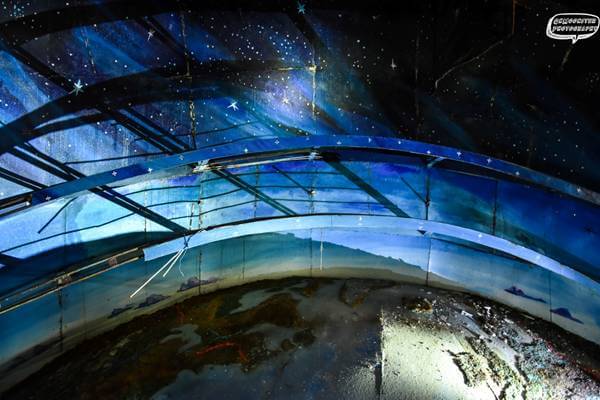 Presentation of the sky in one of the rooms
Photo: Patryk Qki Kwela 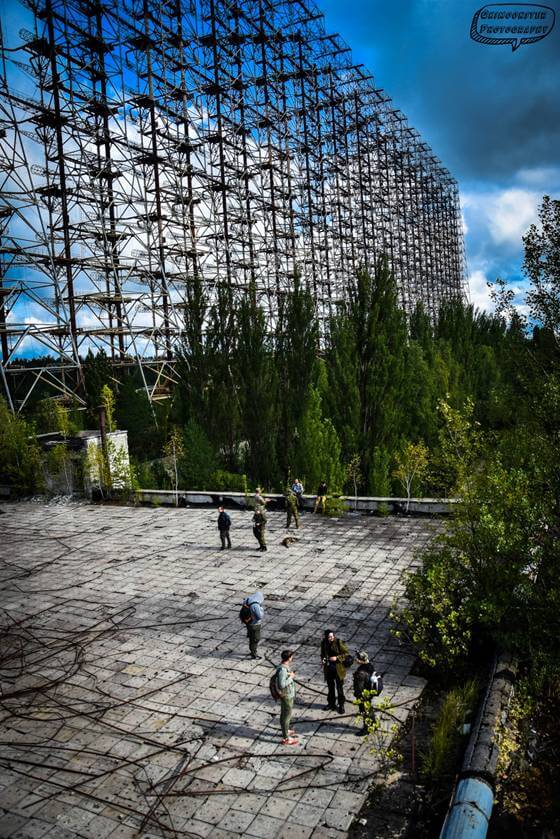 View of the larger of the antennas
Photo: Patryk Qki Kwela

I love to climb tall objects, just like I like to walk in the mountains. Height is not terrible for me, it drives me this kind of adrenaline, but I do everything sensibly and not crossing the borders. The antenna is no longer in a state reminiscent of its glory years. Not long ago, the environment of Urban Explorators and Chernobyl admirers spread the news of the death of one of the experienced Belarusian Stalkers (Stalker is a person who often entered the zone illegally), who fell from one of the antennas, climbing it at night. The structure is already rusted and part of the dipole mesh has been removed. However, the whole installation still towers proudly above the surrounding area. 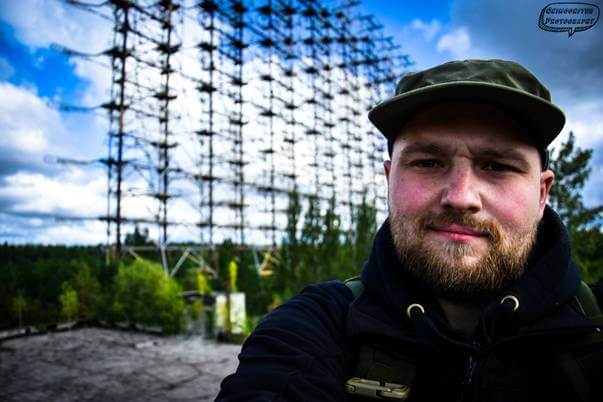 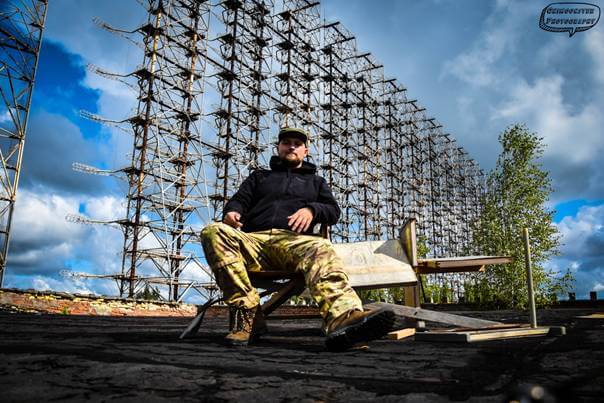 An ideal place to relax on the roof of the highest radar service building
Photo: Patryk Qki Kwela 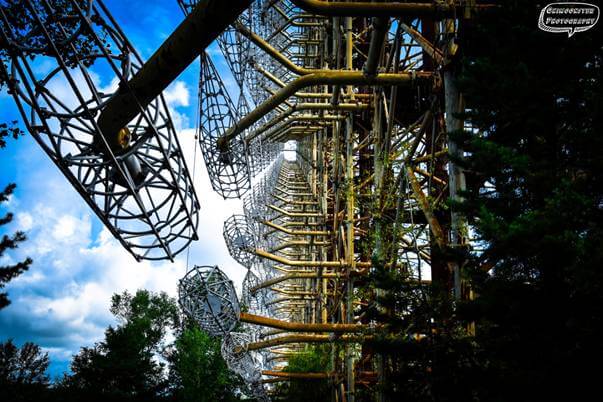 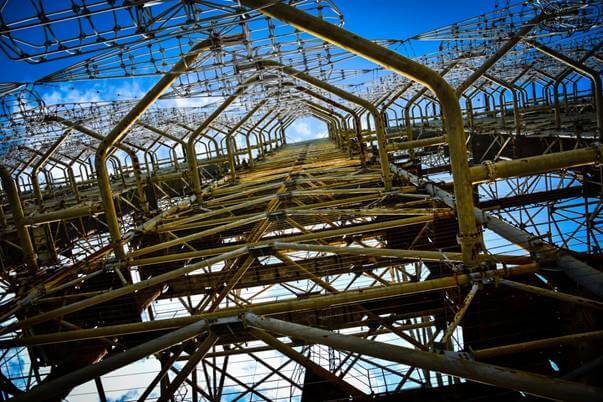 The height of the antenna impresses everyone
Photo: Patryk Qki Kwela 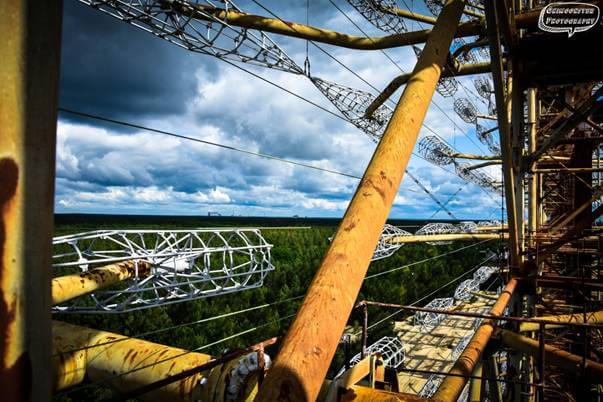 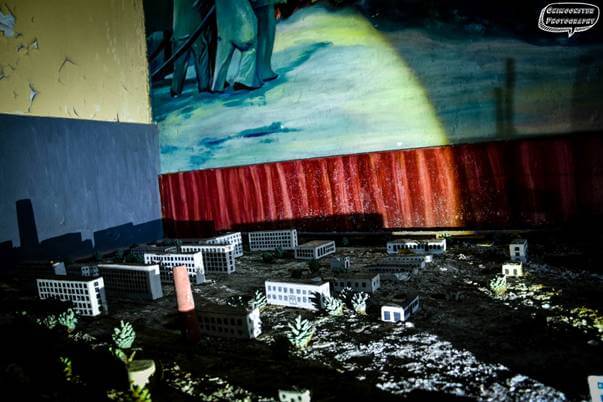 Mockup of the city in one of the rooms in the town
Photo: Patryk Qki Kwela

In 1988, 2 years after the Chernobyl disaster, the station was closed because it turned out that the antenna would not work due to high radiation. Many legends have been created about the object, including that it was intended to control the weather over the sky of the Russian Federation, and even control human minds and contact secret agents in the United States. Today, only empty buildings can be seen, and the antenna itself pleases the eyes of tourists from around the world. 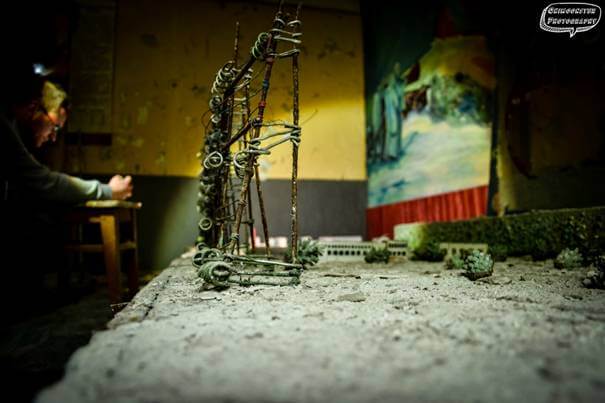 Mockup of the Duga radar itself
Photo: Patryk Qki Kwela 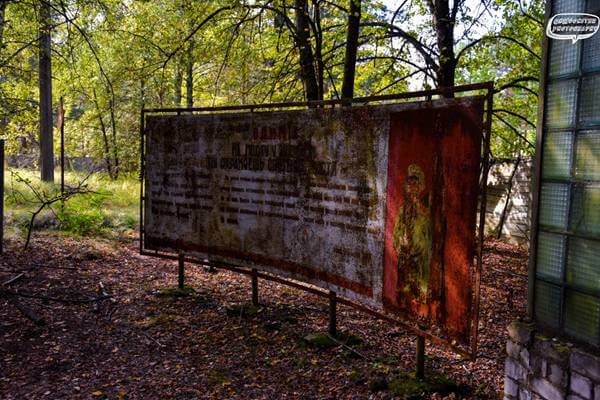 Propaganda board in a military unit
Photo: Patryk Qki Kwela 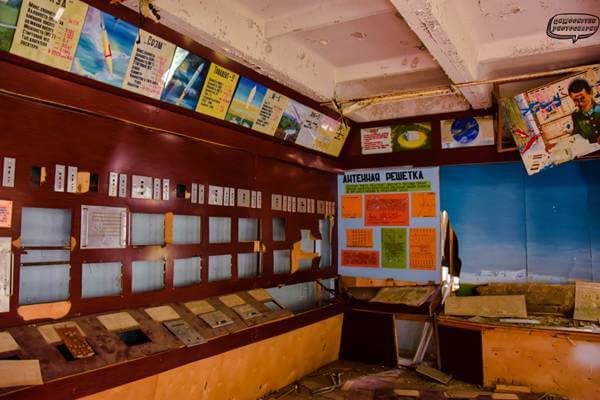 During my trip, I visited many extremely interesting places in the Exclusion Zone around the Chernobyl nuclear power plant. My travels are not only buildings in Chernobyl and Pripyat, but also many smaller, interesting locations near these cities, such as an abandoned holiday resort, port on the Pripyat River. I had the opportunity to see such iconic objects as the Hospital or a very irradiated gripper that cleaned the zone. And in a week I will tell you more about the mysterious Chernobyl.

Half panorama view of the vastness of Duga radar
Photo: Patryk Qki Kwela

The borders were crossed by: