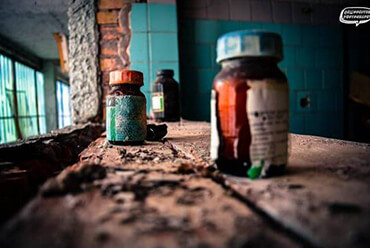 More than 30 years have passed since the disaster caused by the Chernobyl nuclear power plant accident. The area of over 125,000 km2 has been contaminated. These are both forest and urban areas. The power plant area, the forest later called "Rudy" and the city of Pripyat, located about 4 km from Chernobyl, where most of the plant's employees and their families lived, were most affected by radioactive fallout. 49 360 people were evacuated from the city after the disaster. Pripyat before the catastrophe was a pearl of Russian cities - a rich center, to which even people from the capital came for shopping. The second largest employer was the "Jupiter" plant, which is associated with secret urban legends.

"Jupiter" was an industrial plant located in the western part of the city on 11 Fabryczna street. It dealt with the production of electronic components for radios and more. The plant was commissioned in 1979, it was to provide employment to people not working in a power plant. The plant dealt with the production of audio devices: tape recorders, radio receivers and radio stations, as well as the production of reel tapes for Jupiter tape recorders series 204 and 206. Cooling towers located on the site of the plant were part of the water treatment system, pumping stations and sewage treatment plants. 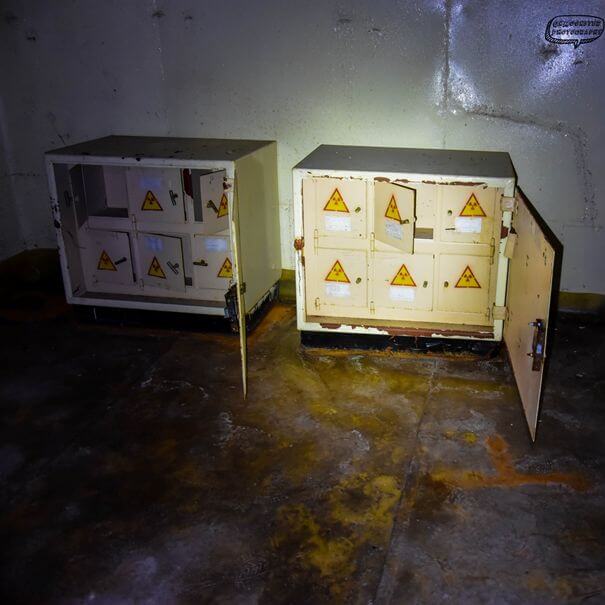 What was produced in "Jupiter"?
Photo: Patryk Qki Kwela 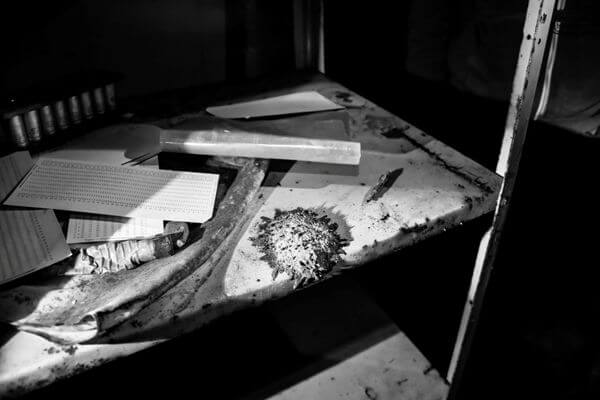 A bookcase at the plant with a strange substance.
Photo: Patryk Qki Kwela 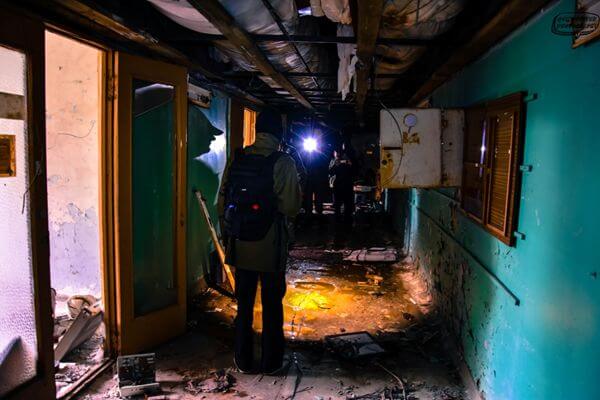 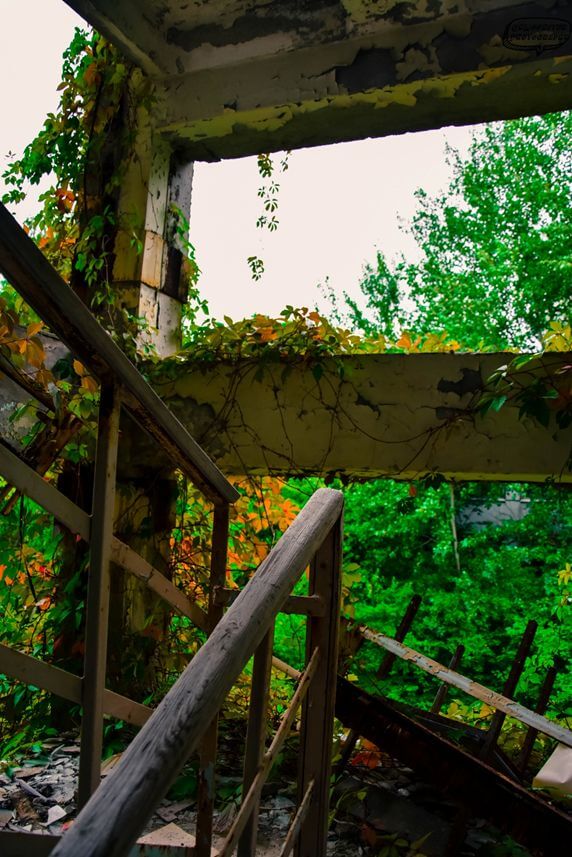 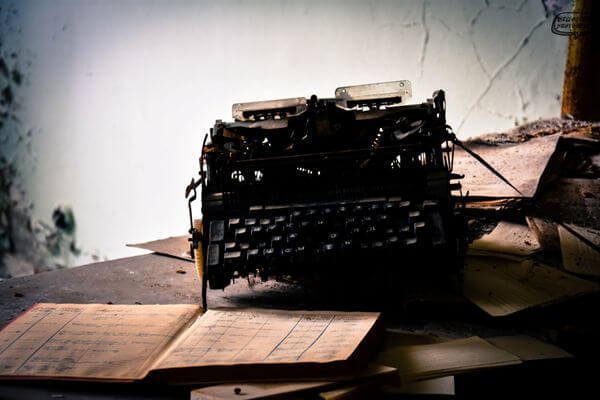 A large workplace, and a lot of bureaucracy and documents.
Photo: Patryk Qki Kwela 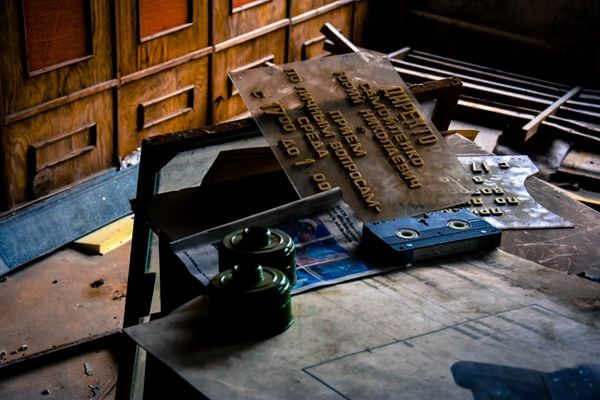 Tapes, bottles, boards, everything from the time of "Jupiter".
Photo: Patryk Qki Kwela

After the evacuation in 1986, the building was completely abandoned. For several weeks it was the target of intensive decontamination, i.e. removal of radioactive contamination. In the same year, it was taken over by the company "Spectrom" and transformed into a radiology laboratory, where research was carried out on various decontamination techniques and instruments for measuring doses of ionizing radiation as well as the production of parts of the Sarcophagus were tested. The plant closed in 1996. 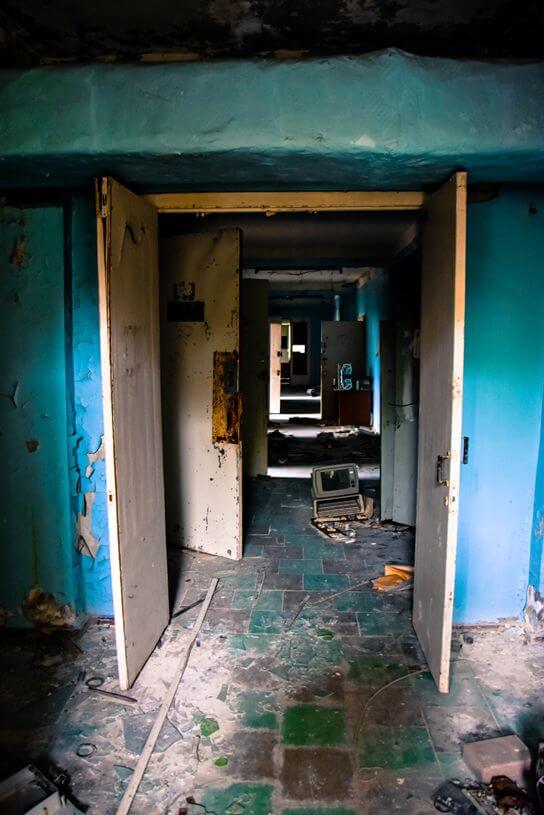 Corridors, where once people milled about.
Photo: Patryk Qki Kwela 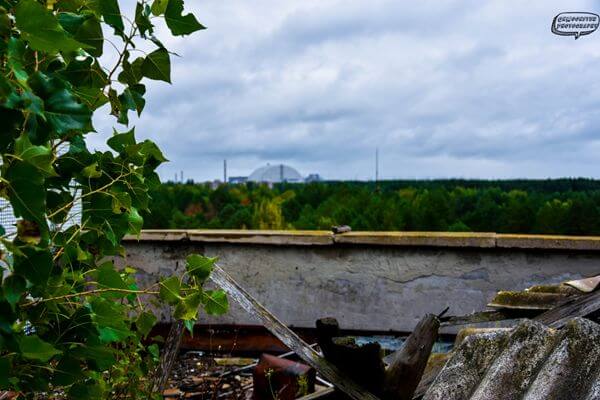 From the roof of the plant you can see the destroyed power plant reactor and the Ark over it.
Photo: Patryk Qki Kwela 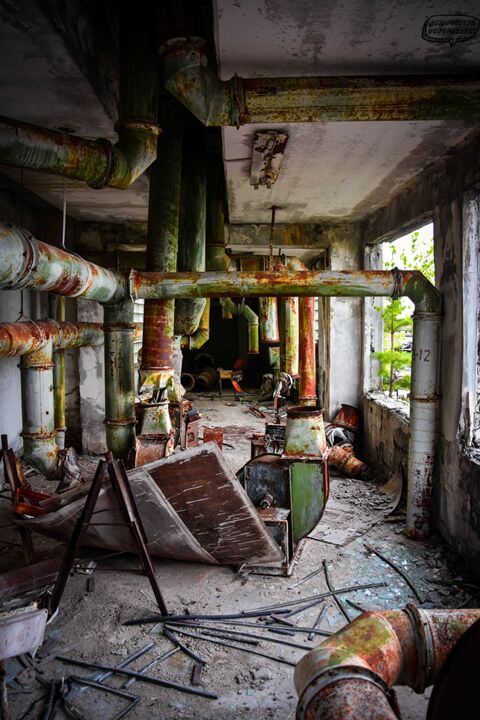 Pipes in the rooms on the roof of "Jupiter".
Photo: Patryk Qki Kwela 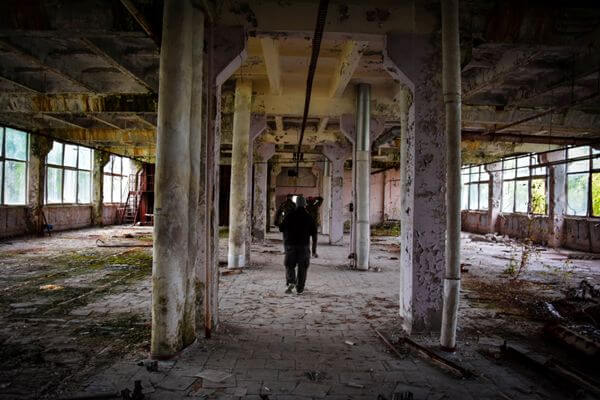 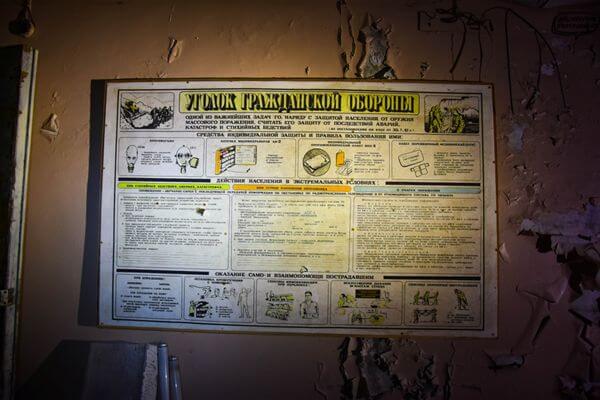 Each smaller or larger urban center in which people live and work has "urban legends". Sometimes these are specific people, dark places or stories about situations passed down by grandmothers gossiping in the store. The village of Pripyat, although abandoned and contaminated with radiation, also has such legends. One of them concerns the "Jupiter" plant, and exactly what this plant produced secretly during its operation. Some sources and legends say that "Jupiter" processed and recovered military plutonium from spent nuclear fuel from the Chernobyl nuclear power plant. These statements are not in favor of the veracity of the former employees of the "Jupiter" plant, who refer to the poor security of the facility, such as a 2-meter wall, or the proximity of such a large city as Pripyat. 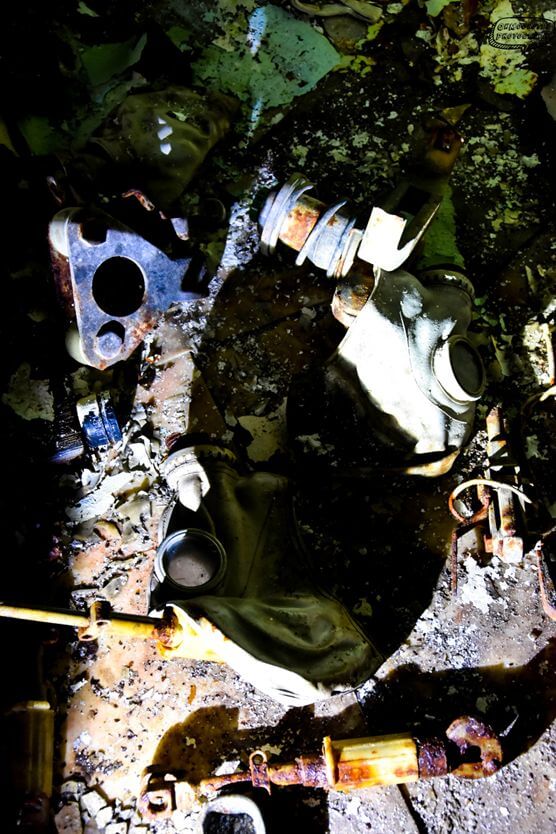 In the USSR, every building was prepared for war.
Photo: Patryk Qki Kwela 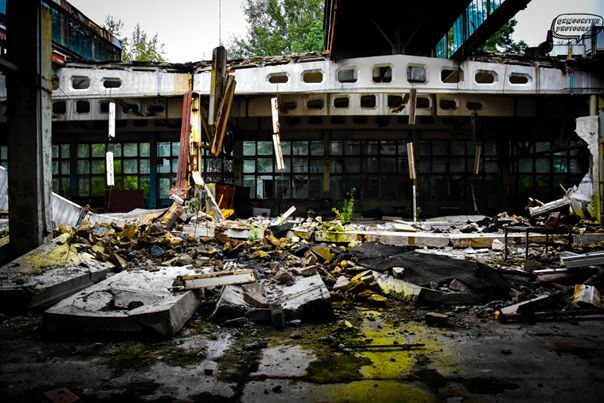 One of the collapsed warehouses.
Photo: Patryk Qki Kwela 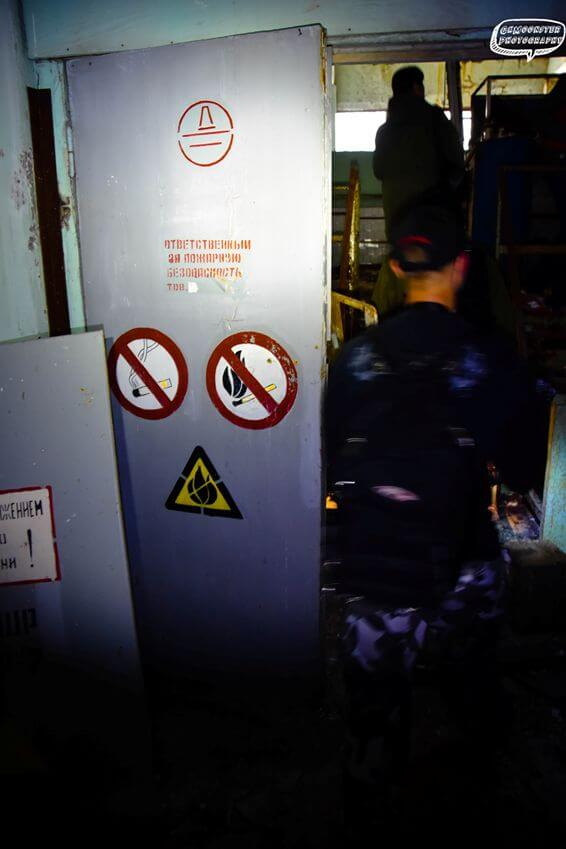 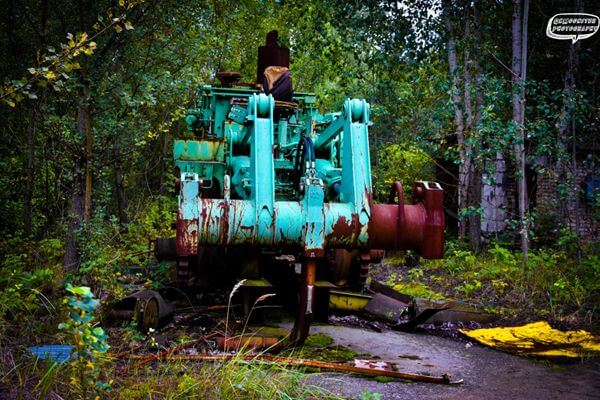 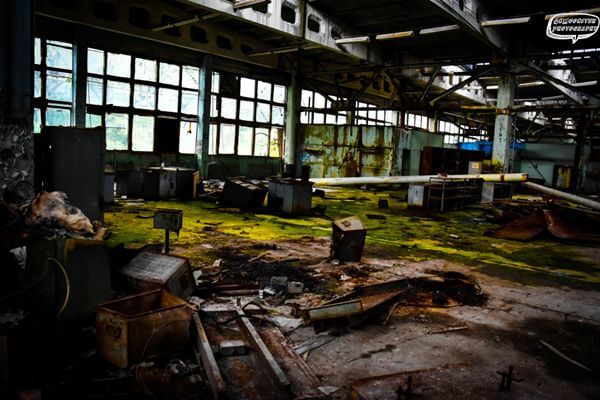 Production hall
Photo: Patryk Qki Kwela
Dosimetric gates left in the buildings, warnings and signs on how to handle radioactive materials, or decontamination rooms are the remains of a radiological laboratory, which operated here until 1996. 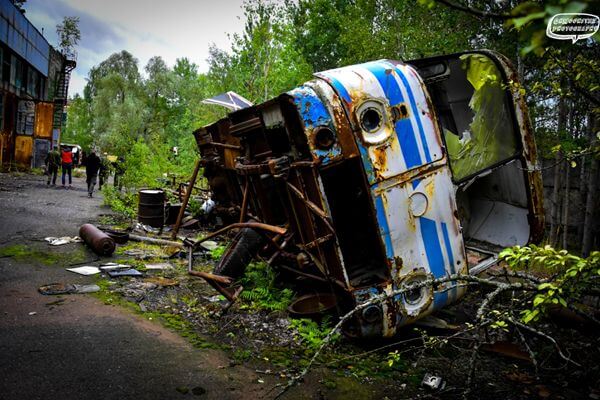 In the vicinity of the plant there are a lot of vehicles left after the evacuation and end of operation of the plant.
Photo: Patryk Qki Kwela 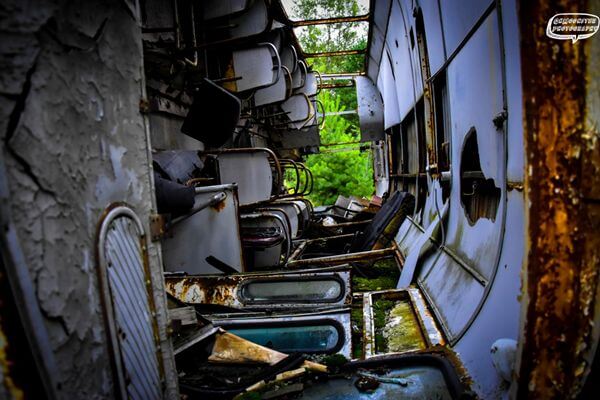 An overturned bus from the era when the plant was still working.
Photo: Patryk Qki Kwela 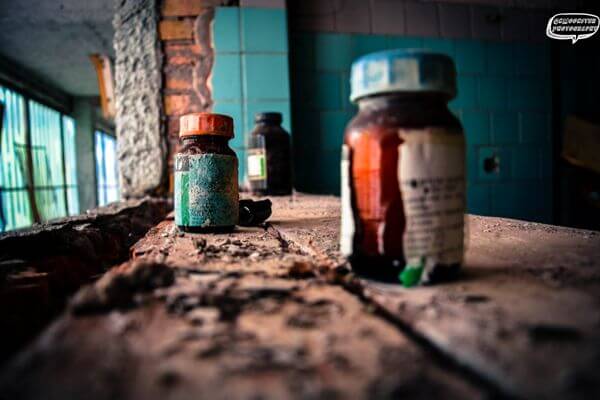 Sometimes you can find bottles with chemistry that is helpful in working with photosensitive tapes.
Photo: Patryk Qki Kwela 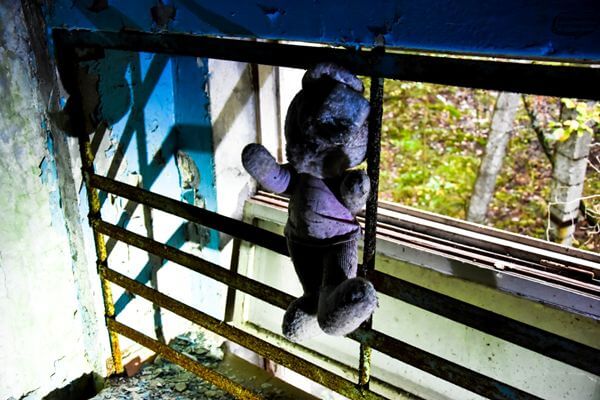 Photographers can fake a horror atmosphere. This is the work of one of them.
Photo: Patryk Qki Kwela 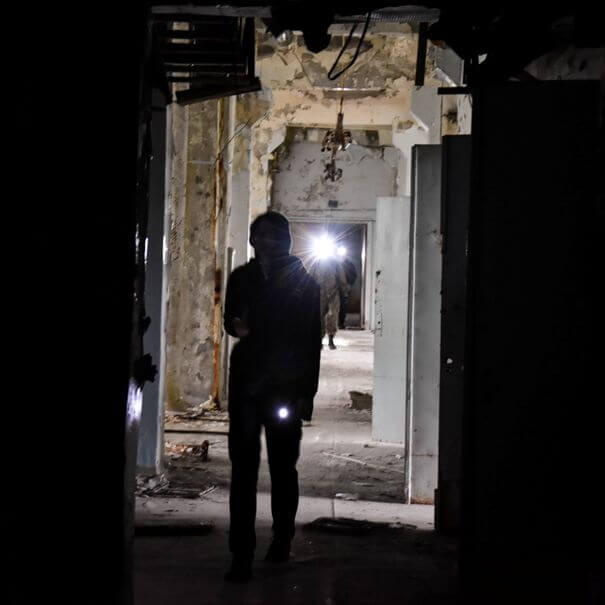 From "Jupiter" I will follow my small private dream, Radar "Duga" located in a mysterious ghost town.