Cooking in a Hungarian cauldron - recipes and tips 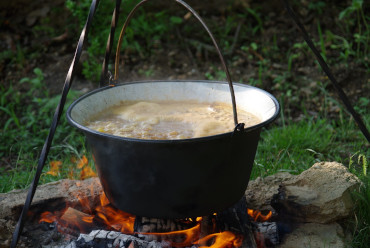 The cauldron, which comes from Hungary, has a long history that will interest not only gourmets. It is no coincidence that it appeared in the Magyars - the nomadic people after a whole day on the road needed a large amount of quick and easy-to-split food. The answer was one-pot dishes, the preparation of which was made with the use of bogracz, more widely known as the Hungarian cauldron. A capacious pot is hung over a fire or a hearth, which is helped by a semi-circular handle. It is worth noting that although the name pot has become synonymous with the dish most often prepared in it, you can prepare much more in them than just goulash soup. Try and discover the advantages of cooking in cauldrons, the most important of which is the fantastic, unique aroma that you can easily get in the garden or at the campsite.

Which Hungarian cauldron to choose?

When looking for a cauldron, you will come across cast-iron models and those decorated with enamel. It is worth paying attention to the second of the above-mentioned proposals, because enameled Hungarian cauldrons are characterized by the highest aesthetics and are resistant to rust. A layer of powdered glass protects it and also prevents food from burning - the heat is distributed evenly. This is one of the reasons why it is easy to care for an enameled cauldron, because you don't have to burn the leftovers with a fire. It is also important that you can use all kinds of cleaning agents to clean it. 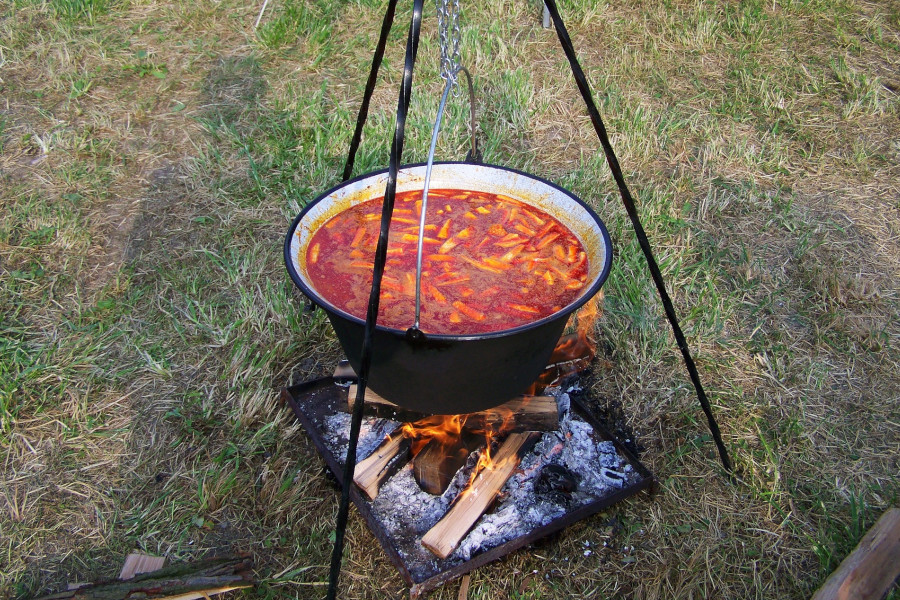 A small fire or hearth is enough to quickly prepare a large amount of food, using only one, roomy pot - the perfect solution for a trip.

If you are looking for cauldrons on the website of the military online store, be sure to pay attention to its size. The largest pots with a capacity of a dozen or even more than 20 liters will be useful only during multi-family meetings or, for example, during tournaments or rallies. If you are going out into the wilderness with the closest family or with a few friends, take a ten- or six-liter Hungarian enameled cauldron with you. If you are going for a solitary bushcraft - choose a model with a capacity of 4 liters. Unless you are going to improvise when building your own structure for hanging the cauldron, take a tripod with you. By adjusting the chain with a hook attached to the set, you can easily set the height of the pot over the fire, thus changing the temperature inside it.

Goulash and halashle - 2 recipes for dishes in a cauldron

The climate south of the Carpathians is much warmer and slightly drier than in Poland. The fertile soil of the Pannonian Basin allows the cultivation of grapes, peppers and grains, and the rivers, as well as Lake Balaton and other lakes provide many fish, e.g. zander, carp, catfish, pike and sturgeon. All the above-mentioned treasures can be thrown into a Hungarian cauldron - even in the form of wine, grapes, and fish, although Hungarian cuisine is not necessarily associated with them. How to make a Hungarian cauldron in two classic ways? 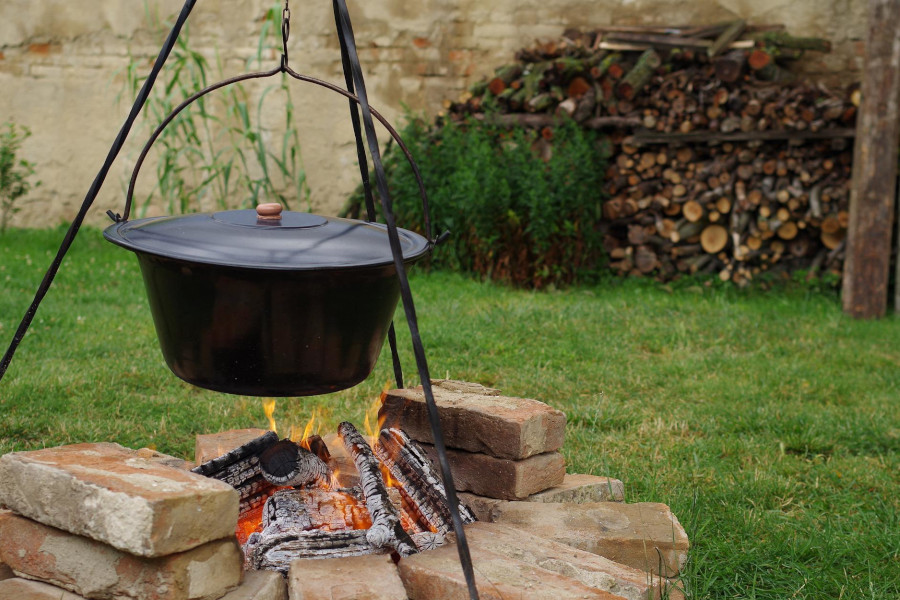 A lid will come in handy for making the goulash in the cauldron - the meat will soften faster.

A recipe for a goulash in bogracz

Only with time Hungarian shepherd's dish became a national delicacy of our nephews from Balaton. The evolution of the dish took many centuries, and to obtain its present form, paprika was needed, which had to be delivered from America first. The goulash, also known as pörkölt (which in Hungarian means "browned"), can be cooked at home, but it will taste best only in a cauldron hanging over the fire. Only a few ingredients are needed:

Contrary to popular belief, the goulash can be made of any type of meat, including fish, game or chicken. The most classic stew varieties, however, are sertéshúspörkölt and marhapörkölt. Translated from Hungarian, the prefixes mean pork and beef respectively. Especially the last of these types of meat is good to cut and marinate in advance - this way it will soften faster.

If you want a more interesting color scheme, choose peppers of different colors, but only for aesthetic purposes.

The selection of spices is a personal matter, but it is definitely worth focusing on a bit of spice, in which hot paprika and black pepper will lead the way. It is best to choose white wine with pork, and red wine with beef.

Preparation of the goulash:

After heating the oil in a cauldron and frying the chopped onion in it, add the cleaned and chopped peppers and diced meat. After a few minutes, add the spices and tomatoes, then cook, preferably under the lid on the cauldron. Wait until the meat is tender, stirring occasionally. Finally, it's time for wine and any seasoning - just use your taste. 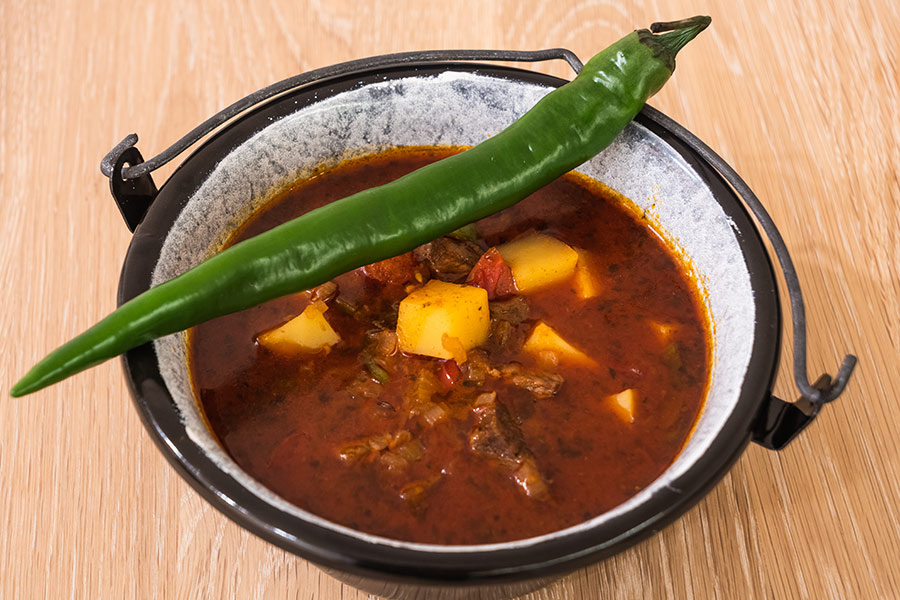 . Wait until the meat is tender, stirring occasionally. Finally, it's time for wine and any seasoning - just use your taste.

Halashle - a cauldron with fish soup

If the stew in its most interesting variety can be with fish, then halashle must be with it. The traditional Hungarian fish soup comes from the regions located on two rivers - the Danube and the Tisza. To prepare the halashle in the cauldron, you will need:

Traditionally, carp is added to halashle, but it can actually be any river fish, such as trout or even cod. Before cooking, the fish should be gutted, filleted and cut.

For halashle, the best choice is yellow onion and spicy, pitted chili peppers or cherry peppers. Of course, if you're not into spiciness, a sweet change will do as well. Tomatoes will introduce a milder aroma and a hint of acidity, which will be more convenient to take with you in a can. Among the halashle versions, there is an option with carrots and potatoes, which will provide more calories.

Traditionally, Hungarian fish soup is cooked in lard, but you can also use butter or vegetable oil. Spices are mainly loose paprika, bay leaves, allspice, pepper, salt and parsley.

The first step in making halashle is to fry the onion in oil until it is translucent and add a few cloves of garlic. Then add the peppers and tomatoes and add the broth to the Hungarian cauldron. After cooking for a dozen or so minutes, it's time for fish and spices - mainly loose paprika, bay leaves, allspice, pepper, salt and parsley. After a quarter of an hour, the dish should be ready! 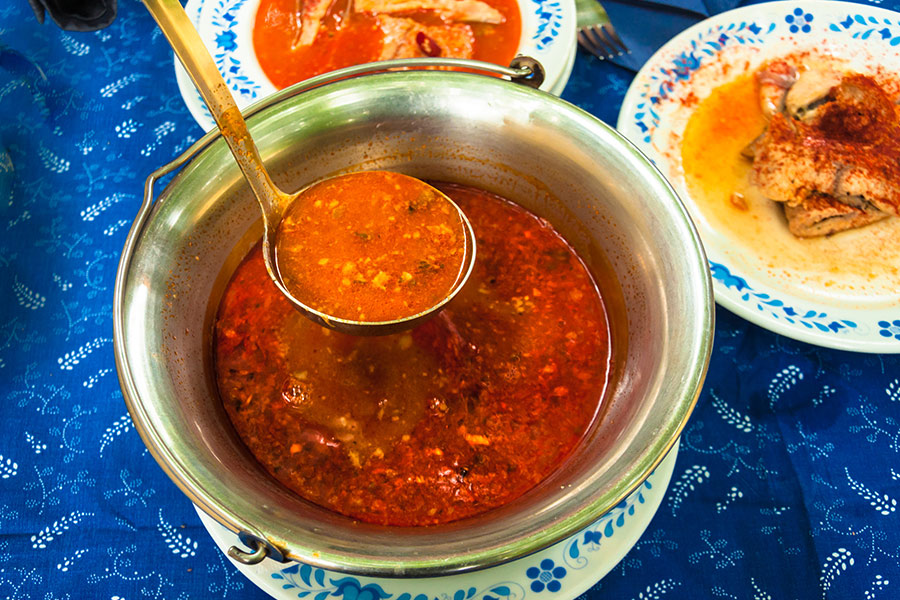 Halashle is an extremely aromatic soup, dominated by the taste of fish and paprika with a pinch of spice.

You can not only cook over the fire, but also fry it. The Hungarian frying pan hung on a chain allows you to easily prepare meat or fish. Its surface, like the proposed cauldron, is enameled, and the structure itself was modeled on the equipment of the Hungarian army. Another choice is a frying pan, which has a handle long enough to distance the hand holding it away from the fire.