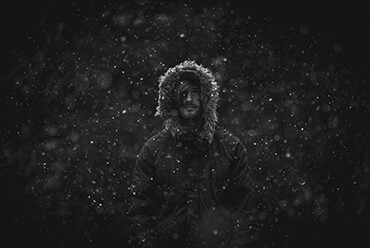 For several days, the weather outside has ceased to pamper us. It's high time to get a warm, comfortable jacket. And this can be provided by the German company Brandit Fashion. Thanks to the wide range in this category, it is extremely versatile. Everyone will find something for himself. This is for a simple reason, Brandit Fashion focuses on functionality, comfort, protection and individuality. Take a look at Milworld.pl and see for yourself!

Brandit is a German company that focuses its production line around military and vintage clothing. All products are perfected in every respect. The materials that are used when sewing are distinguished by their quality and durability. From the beginning, Brandit Fashion combines military and urban clothing. This combination gives durability, functionality and modernity. The above features have definitely made Brandit No. 1 on the European market in setting standards. And as you know, German detail can only lead to success.

It is worth noting that the range of Brandit jackets is mainly targeted at men. Durability combined with fashionable style give the perfect product. The choice of jackets is wide. Just open the presented category and the world of solid jackets stands open. Brandit Fashion does not narrow its frames to choose one type or model. It offers several. Below is a presentation of the iconic 6 selected jackets that are available at milworld.pl.

The history of MA1 jackets goes back to World War I, and its prototype is found in pilot jackets popular at that time. The first MA1 jackets were commissioned by the US Army, which ordered the production of jackets for its air fleet. MA1 jackets met their opinion perfectly - they were warm and windproof. Their only drawback was the very heavy weight. In the mid-1950s this problem was solved, and jackets began to be made of different material. They chose nylon, which was previously used for the production of parachutes. The classic MA1 jacket was available in navy blue or olive. It was distinguished by: no collar, zipper closure and sleeve pockets. Thanks to the heroic deeds of the pilots, the jacket became very popular and was hailed as a symbol of victory and success. This resulted in the production of jackets on a mass scale.

In the '70s, bomber jackets were particularly popular with various subcultures. They were mainly punk and skinhead environments. Later, pilot jackets in various colors were produced. This meant that MA1 ceased to be associated only with subcultures and the military. And so bombers came to everyday life and fashion salons, becoming an icon of modern pop culture. Everyone wears them today. 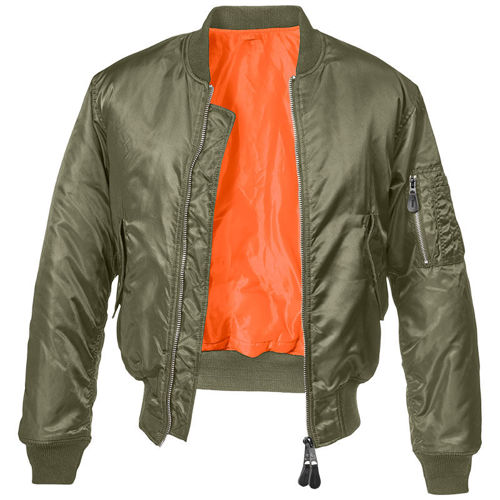 The Brandit MA1 jacket in olive is a classic pattern of jackets produced for the US Army. Its advantages focus on windproofness and waterproofing. The polyester fibers used in this jacket additionally affect the proper maintenance of body temperature. The sleeve pocket is a reference to tradition, while an additional pocket sewn in increases its functionality. You will not be cold in this jacket.

Nowadays, coats are an icon of men's style. They add elegance and, well-cut, care for a gentleman's look. The fashion for coats comes and goes. You can now see a return to the classics. Of course, sometimes a bit of nonchalance does not hurt, but in the case of a coat there is no room for such. Tradition, tradition and again functionality. Exactly these two features are in coats.

Coats began to be produced in the 19th century. At that time, trench coats became very practical to protect worn clothing from rain. However, they did not gain such popularity as coats. This type of cover was most often worn by soldiers of a higher rank. That is why people wearing a coat are often seen as full of dignity and seriousness. However, their cultivar coats owe the stars of cinema. In the 40s it was Humphrey Bogart playing Rick Blaine in the movie "Casablanca", while in the following years it was James Bond played by various actors. 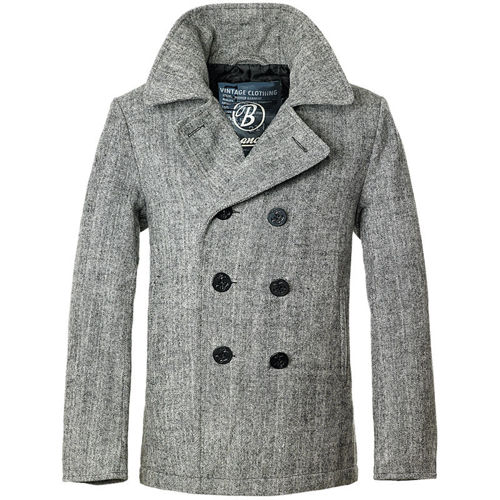 Brandit Pea Coat in gray is specially designed for the current weather conditions. No cold rainy day is scary for it. The warm wool from which it is made provides good breathability, and the high collar protects against wind. The coat was modeled on the coats of US Navy soldiers. Its traditional look, modern color and functionality guarantee a style of good choice for every man.

The history of wearing the park began with native Eskimos, who were primarily interested in protecting the body from cold and wind. For them, the park was to be primarily functional. And here, once again, the army brings fame to jackets. The US Army dressed its soldiers in parks during World War II and the Korean War. The park had to be tied tightly with strings to properly seal it against wind and rain or snow. In the 1960s, Modsi, a subculture from Great Britain, started wearing the park. The parka jacket became so popular that the British band The Who used it on the cover of one of their albums. Thanks to this, today it is fashionable to wear parkas. You have a park, you have style! 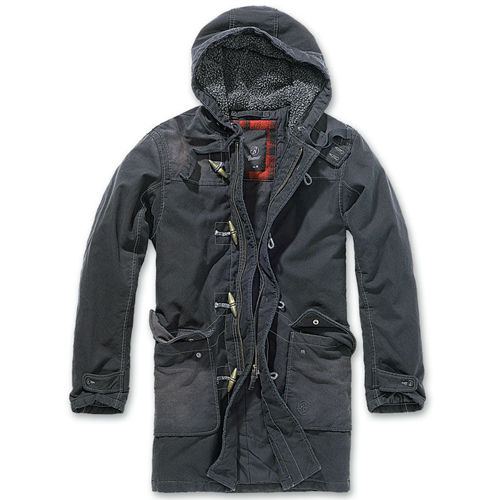 The Brandit Woodson parka jacket in black is the quintessence of combining modernity with practicality and an elegant look. Perfect to wear every day. Every man will appreciate the pocket capacity of the jacket. Brandit parka has a loose cut, so you can easily put it on a thicker sweatshirt or winter sweater. The hood is additionally insulated with artificial sheepskin. No frosty day will be a problem anymore.

Jacket M65 - a revolt with style

The first M65 jacket was designed in the United States in the 70s. It replaced the older model of M51 jackets. The M65 jacket was the basic equipment of American soldiers fighting in Vietnam. Currently, it has been replaced by the Extended Cold Weather Clothing System jacket. The classic M65 has a zipper and hood. Additionally, it is equipped with 4 pockets with press studs. The jacket also has a buttoned lining. The jacket infiltrated mass culture when it appeared in two legendary films. It was worn by Travis Bickle played by Robert De Niro in the movie "Taxi Driver" and John Rambo played by Sylvester Stallone. In Poland, the M65 jacket became a symbol of freedom in the times of the PRL. 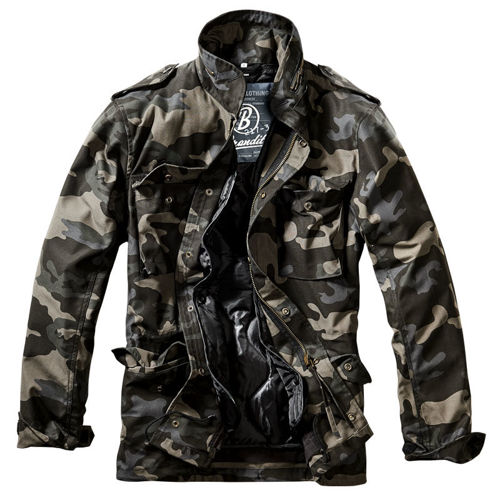 Don't you want to get cold and wet? The Brandit M65 Classic jacket is the perfect solution for cold days. This model has all the classic features of the M65 jacket - it has a hood hidden in the collar, elongated cuffs and a buttoned lining. Brandit Fashion made sure that the M65 Classic model works well on winter days during everyday use.

You can do more with a kangaroo

The first prototype of the kangaroo jacket (anorak) could have been created by the Inuit around 500 years ago. However, kangaroos with the appearance of the time appeared only in the 70s of the twentieth century in the United States, when the real boom began to combine sportswear with casual wear. In the PRL, the first kangaroo jackets were made of tarpaulin. However, the material was heavy and uncomfortable to wear for a long time, so jackets made of lighter materials, i.e. polyester or nylon, began to be produced. In Poland, kangaroos were initially worn as the outer cover of a scout's outfit.

A characteristic feature of a kangaroo is that it is put on over the head. And they owe their name to a large pocket on the front of the jacket that resembles a kangaroo bag. 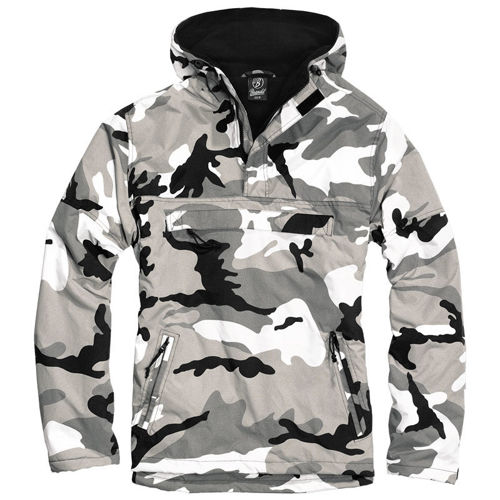 Brandit Windbreaker winter kangaroo jacket will convince you that winter sport is a good idea. The fleece lining provides warmth and comfort during longer wear, e.g. on a slope, and 3 pockets guarantee a classic jacket look. By joining the camouflage / color you choose, you get a jacket that meets all your expectations for a winter jacket.

Bundeswehr - back to history

Clothing from the Bundeswehr, or that stylized after the original equipment of German soldiers, has become very fashionable recently. It cannot be hidden that the military style returns every season in a new release. However, some camouflages, such as characteristic of BW Flecktarn, never go out of use. Brandit Fashion, combining the quality and functionality of BW jackets with current trends, has created a jacket ideal for all conditions. 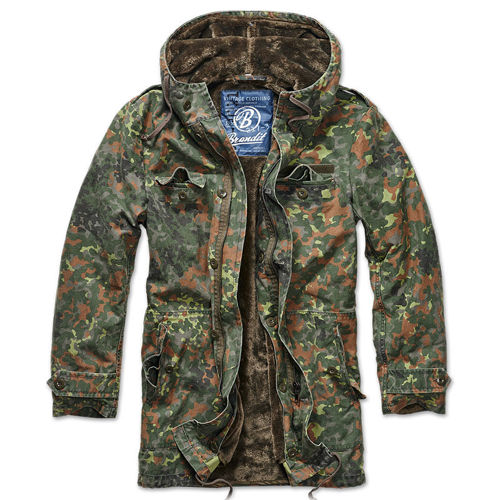 Brandit BW military jacket with fur lining is a proposal for the most demanding users. This model of the jacket is a proven solution regardless of the season during every day wear or use of the jacket during reconstruction.

Now we are sure that this winter will not surprise you!