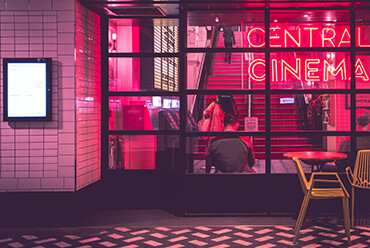 You probably wanted to play some of the characters in your favorite movie or series. Or maybe you wanted to look like the hero of one of the cult movies? Be like John Rambo or James Bond? It cannot be hidden that often the costumes of film heroes go down in history and become important for pop culture. That is why we have prepared for you a list of 10 iconic jackets from the screen. All jackets are available on our Milworld.pl store!

Jax Teller from the American series "Sons of Anarchy". Character played by Charlie Hunnam. Tough guy with a look that bravely deals with his enemies. Leading a workshop, he also commands a motorcycle gang. Together with his companions, he wants to be in power in a dangerous underworld. Jax Teller's outfit indicates that flannel shirts are still in vogue. Loose, slightly too large, fantastically combined with denim pants and a leather vest. The main character of "Sons of Anarchy" maintains this stylization for most of the story. After all, a man riding a motorcycle must take into account the comfort of riding. Such an outfit? Why not. 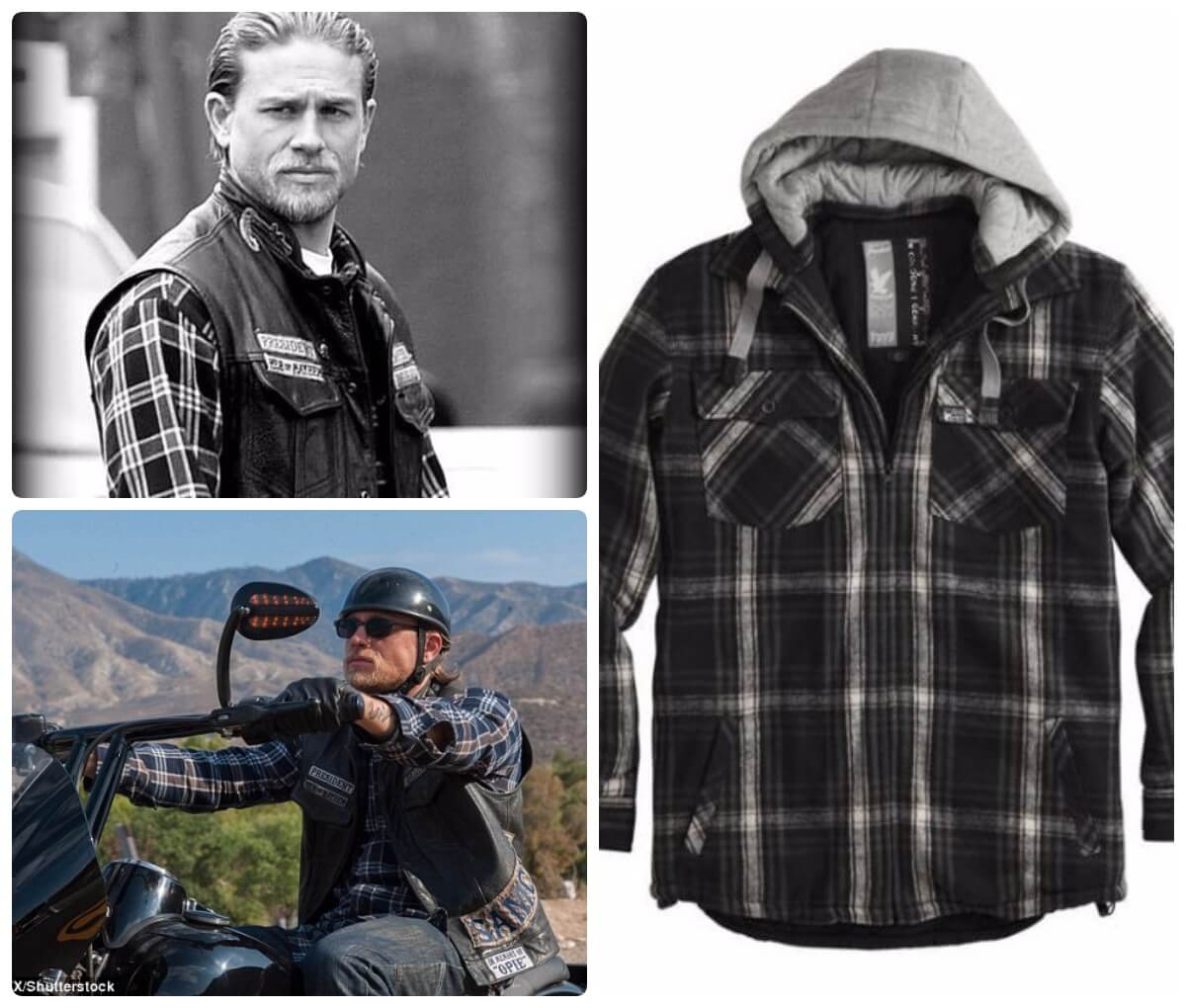 Our suggestion: This is not the shirt that Jackson Teller wore, but it seems to be a better option. This is the jacket of the German company Surplus. Classic vintage style and phenomenal cut are the main advantages of this jacket. Lumberjack is insulated, so you can go on a motorcycle ride or go for a walk on an autumn and winter day. Isn't it almost identical?

9. Rebel Without a Cause - bomb hit

James Dean in his most famous role. Jim Stark, a rebellious young man who is moving to a new city. In it he finds enemies and friends. "Rebel without a cause" has permanently entered the pantheon of the greatest hits of the cinema. The jacket, in which James Dean played Jim Stark, made a sensation. Her red color stood out from the clothes of other characters. In a way, this jacket has become the hallmark of Dean himself. Thanks to the role played, he became an idol of a teenager. 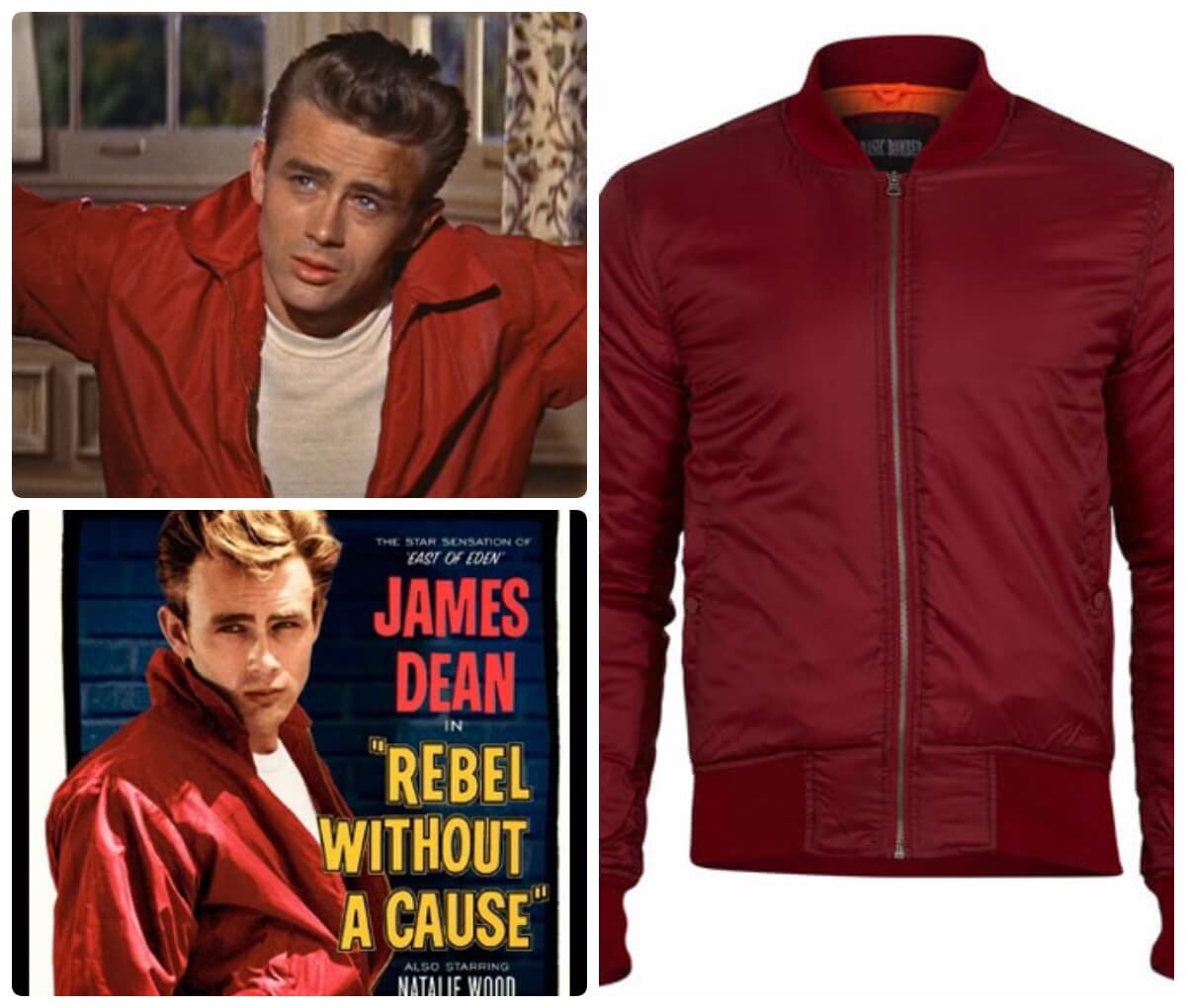 Our suggestion: In the Milworld.pl store you will find a jacket that James Dean wore himself! Of course not, but the above model is so similar to her that Dean himself, before entering the set, would not know which one to choose. The jacket has many functional elements that will protect us from the cold, e.g. polyester material and elastic cuffs at the bottom. Now you can be like James Dean!

2012 film directed by Simon West. Action cinema in the best sense of the word. The cast is impressive: Sylvester Stallone, Jason Statham, Chuck Norris, Jean-Claude Van Damme, Bruce Willis and Arnold Schwarzenegger are just the beginning. Continuation of the series in which there is no room for mercy. 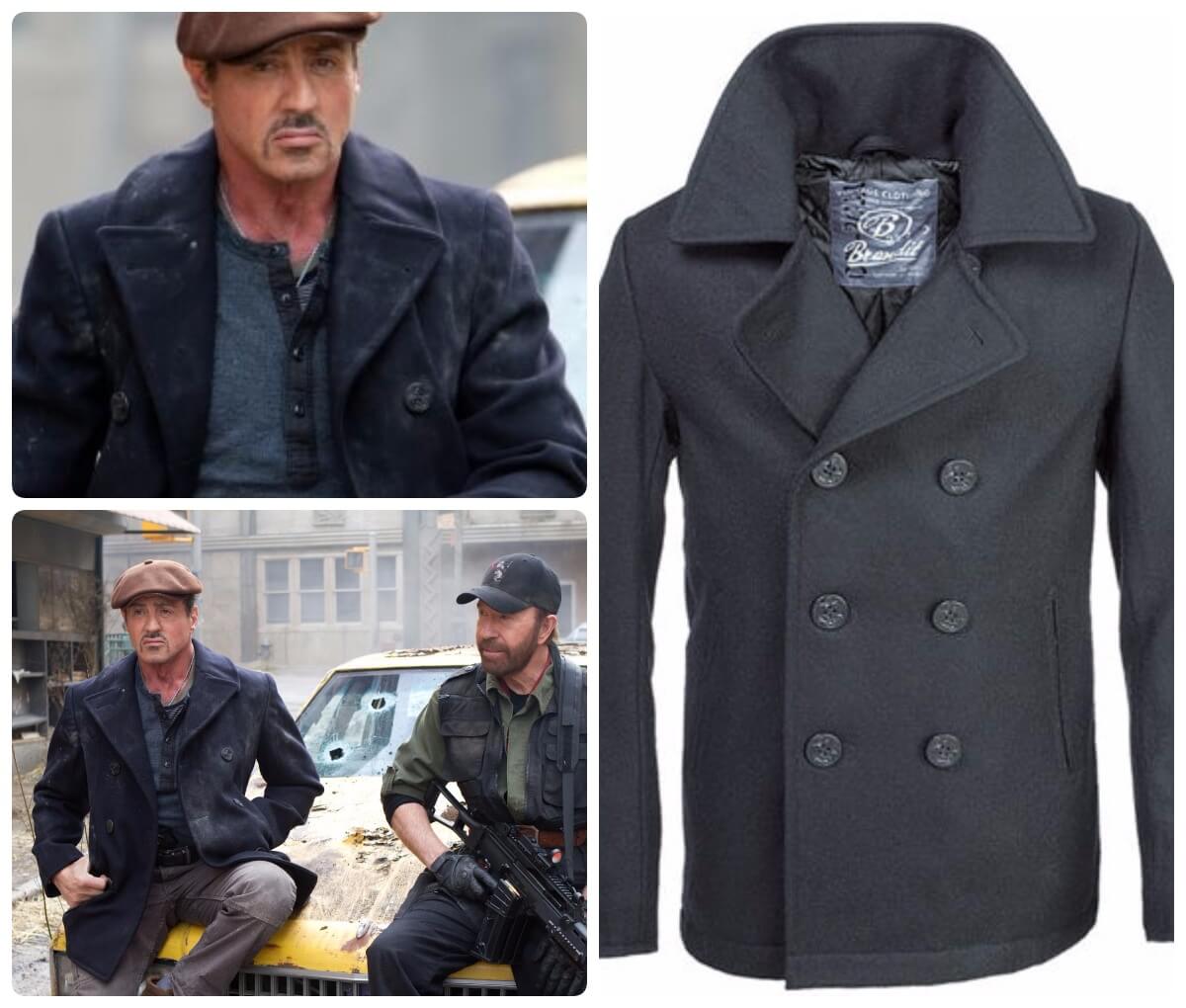 Our suggestion: In one of the scenes Sylvester Stallone is visible in an elegant coat. Brandit created a similar model to the one from the movie. Our proposal is a well-tailored Pea Coat cut that will make you feel like a real mercenary commander.

One of the most famous film elegantes is the character of James Bond. No matter which actor played the role of a British agent, James Bond has always been a symbol of male elegance. Perfectly tailored suit and elegant trench coat or coat. A class in itself! 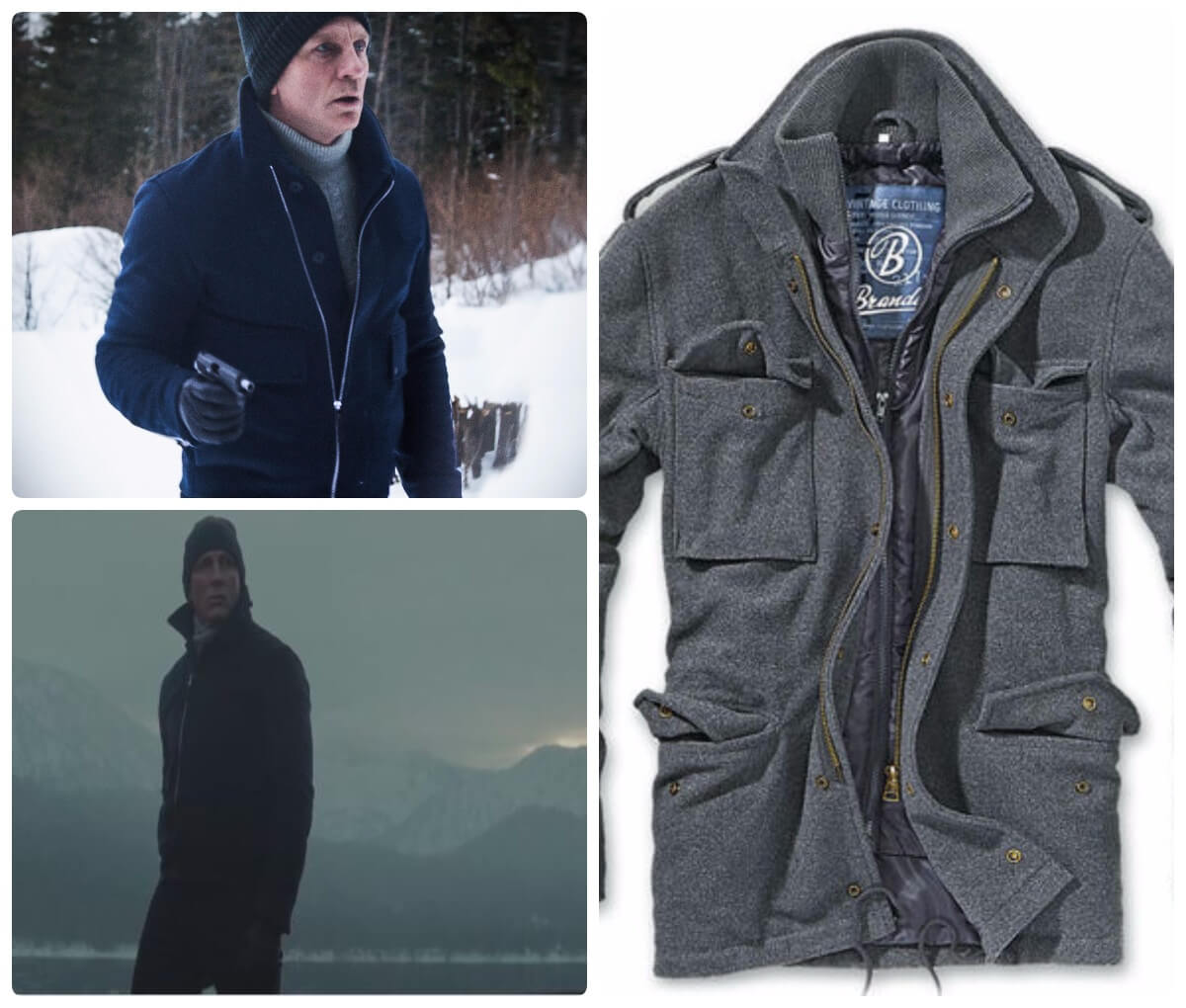 Our suggestion: An extended Brandit winter jacket could easily appear in all James Bond movies. Tasteful cut and functional solutions provide this coat with high quality. Every man looks like James Bond in it!

Marty McFly childhood hero from the 90s. It was he who, thanks to the wonderful Delorean, was able to move in time. Surely we all remember his wonderful quilted red vest, in which he moved gracefully on the screen. The legendary vest accompanied the hero of the movie "Back to the Future" almost all the time. Michael J. Fox, who plays the main role, looks great in it. 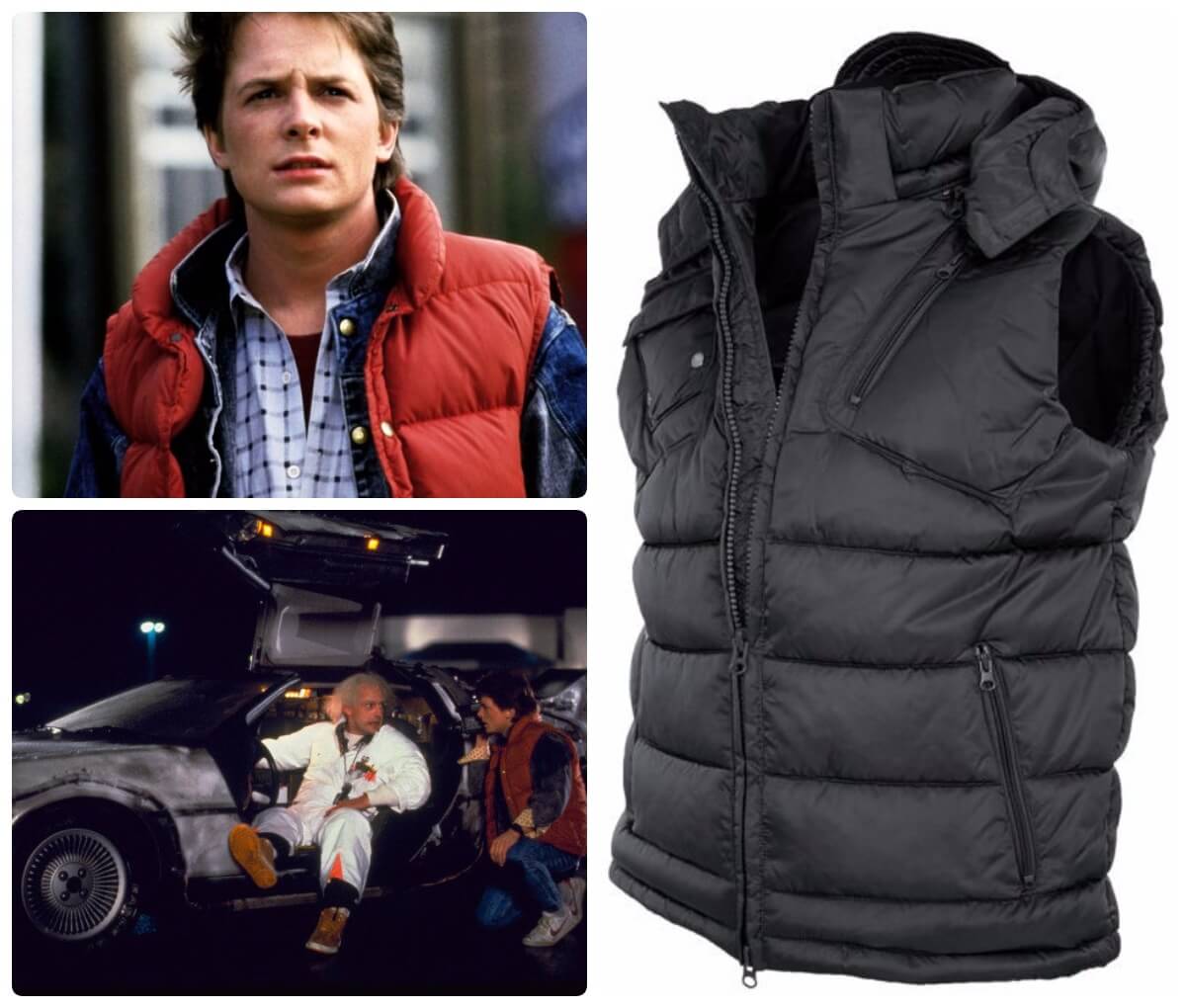 Mil-Tec Quilted Vest with hood - see in the store

Our suggestion: You can find a similar vest at Milworld.pl. It is not red, but Marty McFly alone would not despise this tempting black. Mil-Tec always cares about its customer. The above model is ideal for cold weather.

Most women get soft legs at the sight of this handsome man. Leather jacket, rebel image and deadly look. Who wouldn't want to be in Danny Zuko's place? Appearance and style for most guys is the foundation. Danny's character has become an inspiration for many. First of all, because of the way he dressed. Thanks to the creation of John Travolta, the world has gone crazy about leather jackets. 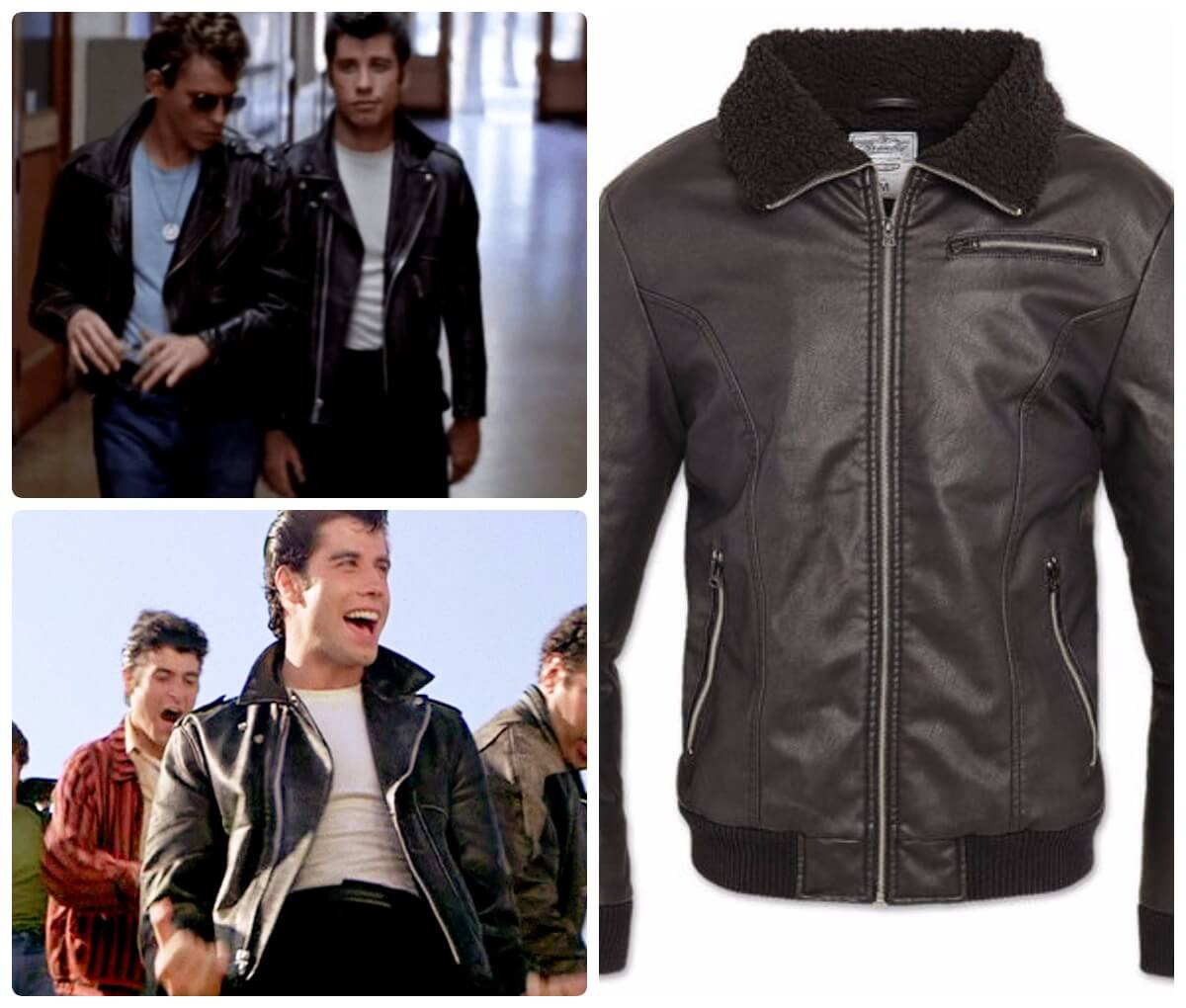 Brandit Jacket B52 - see in the store

Our suggestion: Today you can be a real lover. This model of jacket will throw many a woman on their knees. From now on you can feel like John Travolta as Danny. Our suggestion is the winter version of Danny's jacket. It is very warm, so bad weather will not be scary, and women's eyes will be directed towards you.

Continuation of the adventures of four friends. The whole pack goes to the wedding of one of them. Not anywhere. Thailand is the direction of their journey. As in the first part, at some point a promising evening gets out of control. Bradley Cooper (who plays Phil in this movie) walks in a classic Harrington on one of the shots. I must admit that it looks very stylish in it. 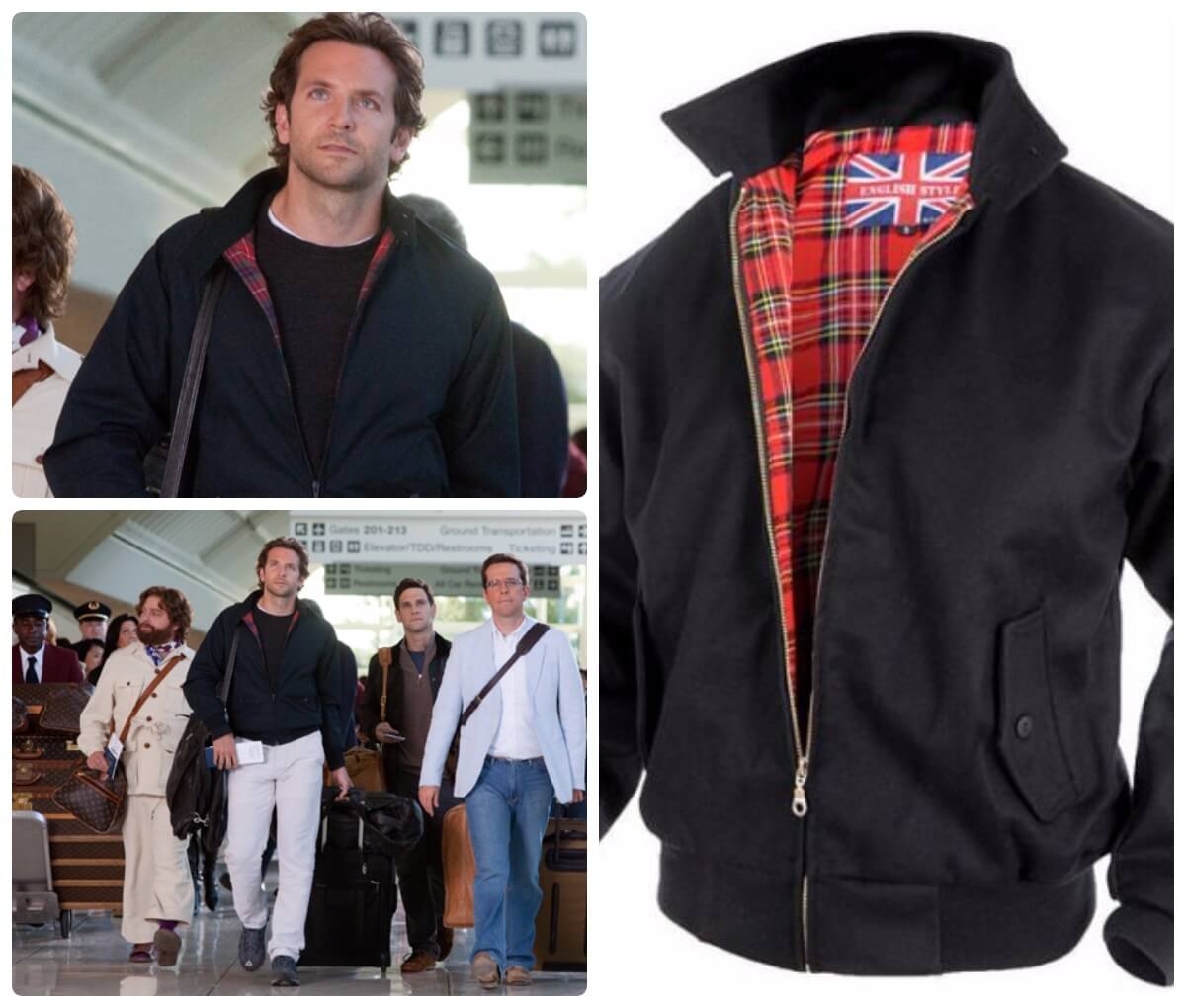 Our suggestion: A jacket for every rogue with a good heart! Traditional cut combined with everyday comfort. Every man cares about this. Even Phil Wenneck would not despise such a jacket.

The parka jacket has its origin in the American army. Soldiers wore it first. An example of a movie in which it appears as a soldier's clothing is "Edge of darkness" from 2014. Starring Brad Pitt and Shia LeBeouf. 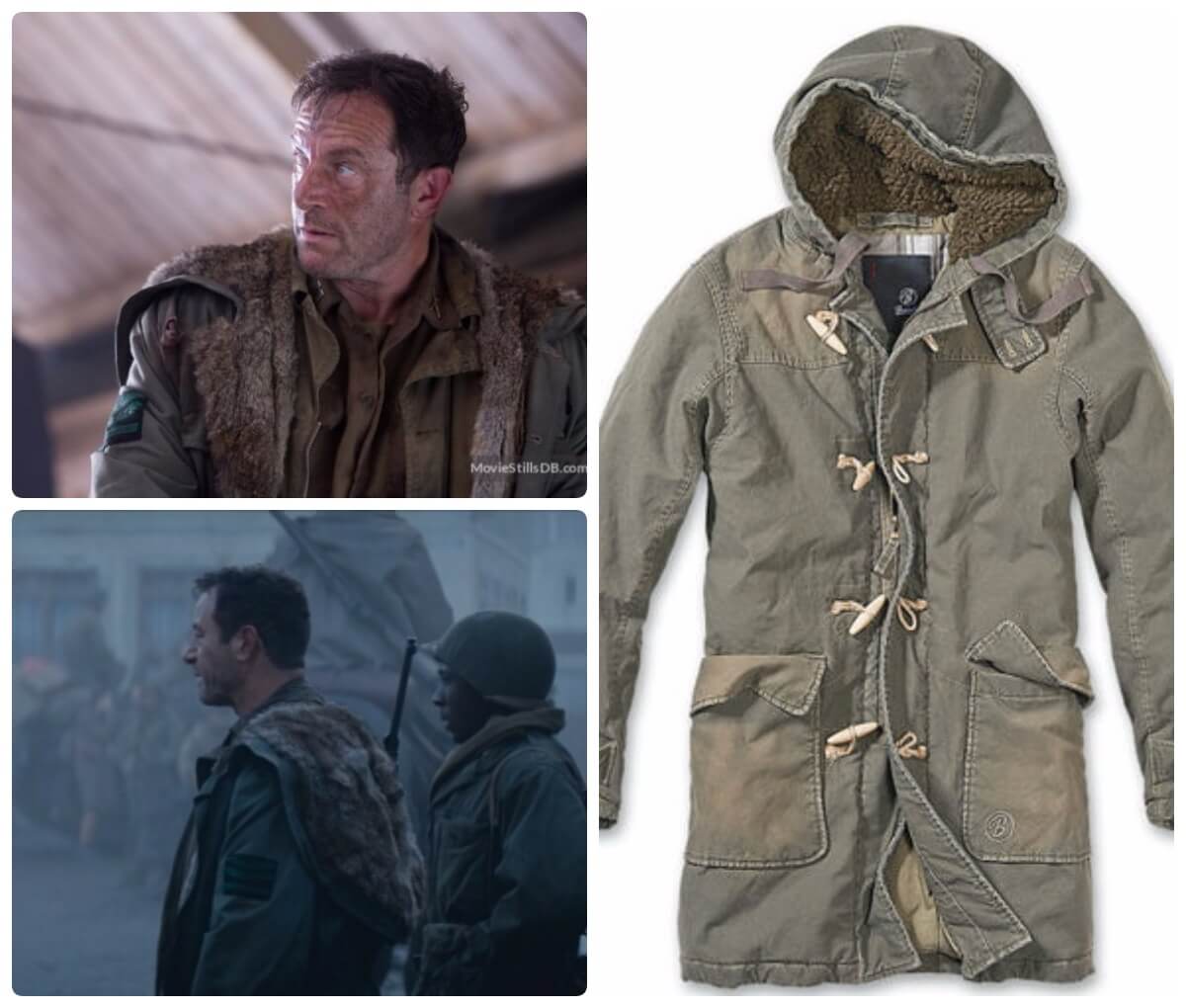 Our suggestion: A very similar jacket model can be found at Milworld.pl. It is a parka made of thick corduroy, resistant to abrasion and sharpening. Winter with such a jacket will definitely belong to one of the nicer seasons. Live jacket captures the full military character and looks great. Worth recommending!

Insomnia sufferer, a Vietnam war veteran, works as a taxi driver. Seeing violence and cruelty during night journeys, he aims to deal with bad people. The trademark of Travis in the film is the mohawk and military jacket model M65.

Surplus Jacket M65 Classic 2in1 US Army - see in the store

Our suggestion: A well-mapped military model M65. Jacket manufactured by Surplus brand equipped with a detachable lining. By wearing this jacket you can be calm that you will survive every winter without freezing. A great choice in everyday use.

Everyone knows and has seen this movie. A real classic. It wasn't God who created Rambo, I did it. John Rambo, a former Green Beret commando, is in conflict with the local police. Tormented during his arrest, he escapes to the forest. Rambo decides to defend himself against the attack of policemen. 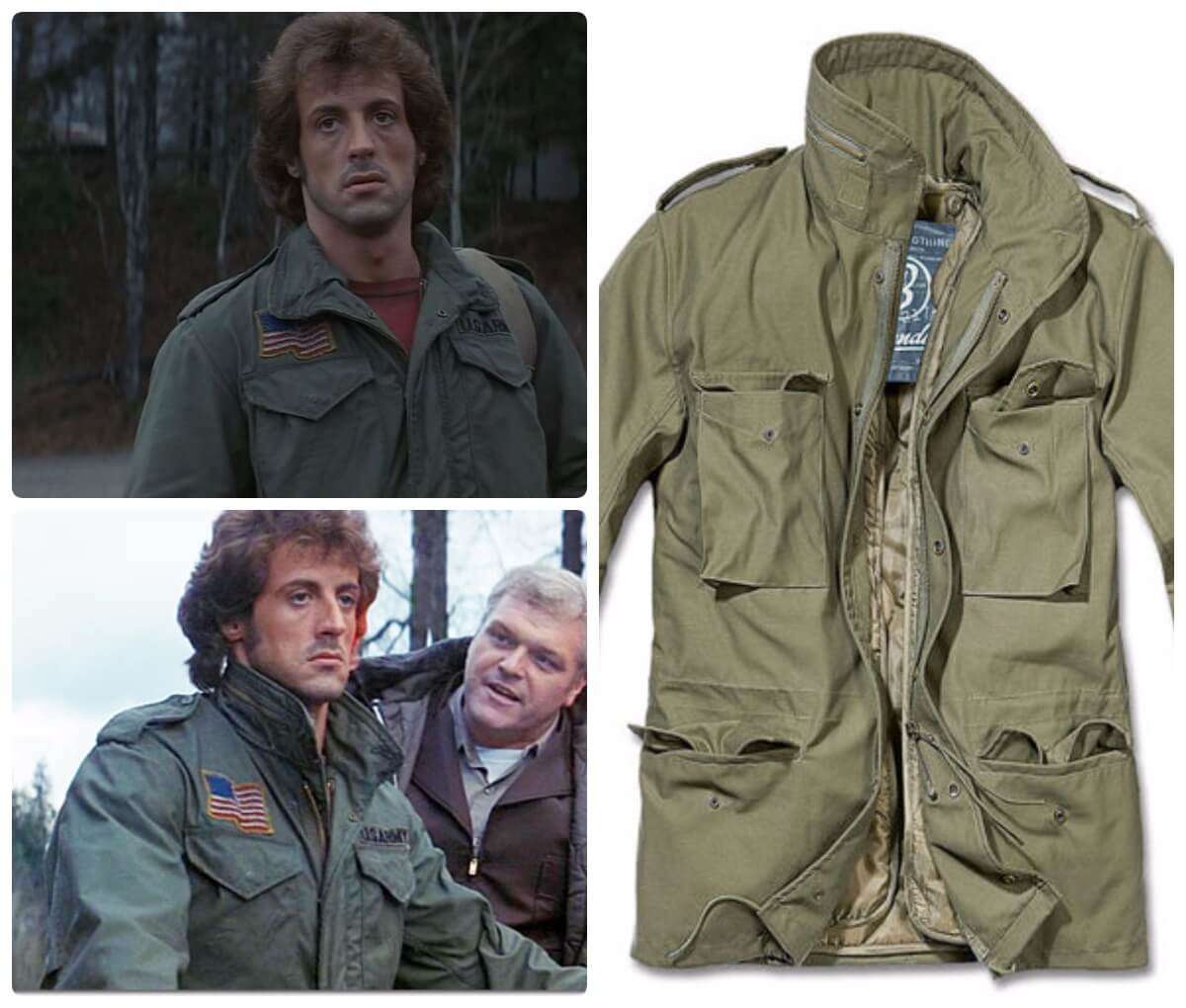 Our suggestion: John Rambo dressed in classic military clothing. Attention is drawn to his jacket - model M65. Our proposal is a classic M65, which works well during every day wear or field operations. Perfect for every season of the year. And after adding your own emblems and patches, walking down the street, you'll be able to feel like John Rambo.

As you can see, the world of cinema and fashion have always been together. Cinema stars through their stylizations popularized iconic costumes. For some men, the characters in the movies became the inspiration for changing the style. Apparently, many have become bolder in their attire, gaining confidence.